Philadelphia saw its population grow, a pope came to town and Jason Kelce gave one of the great Super Bowl speeches of all time. Yet opioids and poverty cast dark clouds over our "Gritty" successes

We should be relishing in a decade of success for our city. Philadelphia, after all, served as a destination for pontiffs and presidential candidates. Women took power over Pennsylvania politics. The skyline grew taller. A Super Bowl victory parade really happened on South Broad Street.

Still, roughly 1-in-4 city residents live in poverty and a neighborhood once considered one of America's great blue-collar strongholds, Kensington, remains mired in opioid-driven despair.

Studying the past can clarify the future. Here are the ups and downs of the 2010s in Philadelphia, and what these notable events can teach us about the soon-upon-us 2020s. 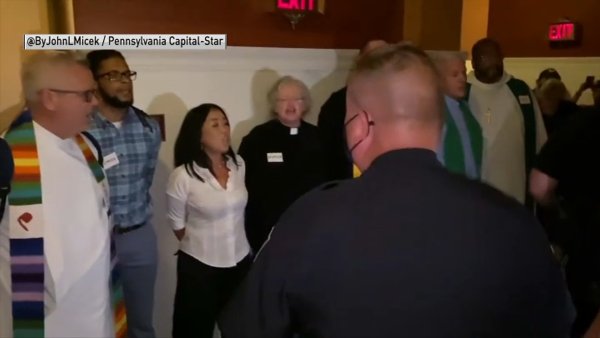 Superstorm Sandy Brings Climate Change to Forefront: The great storm of October 2012 was so devastating and so original that it refused to be boxed in by the term "hurricane." The superstorm arrived early in a decade of environmental hemming and hawing: Cheap gas from fracking, the Paris Agreement, electric cars, Farming the Sun, the 41st American president, ghost forests, Greta Thunberg. There is hope for the 2020s. Could it be the decade of off-shore wind turbines and the rise of clean energy?

Seven years after Hurricane Sandy initially made landfall, survivors of the disaster are stiill recovering. New Jersey resident Doug Quinn, whose house was destroyed by the storm, became involved in a longtime legal battle about receiving the full amount of his flood insurance claim. Quinn is supporting legislation backed by Senator Bob Menendez that would reshape the Nagtional Flood Insurance...

The Mummer Who Would Be Super Bowl Champion: Jason Kelce was a Super Bowl champion before he donned a Mummer's outfit and gave one of the great speeches in the city's history. But when the Eagles star center took the stage Feb. 8, 2018 on the stairs of the Philadelphia Museum of Art, four days after Super Bowl LII, he looked like he'd been marching with the Mummers on New Year's Day since he was a little kid.

Eagles center Jason Kelce brought down the Parkway with a fiery speech about his team and the people of Philadelphia as the city celebrated its first Super Bowl victory. Here’s his speech in full. NOTE: This video contains profanity. Viewer discretion is advised.

Pope Francis Says Mass on the Parkway: The leader of 1 billion Roman Catholics worldwide, and the first pontiff born in the Americas, wowed U.S. crowds during a trip to New York, Washington D.C. and Philadelphia. But Francis chose Philly as the centerpiece of his six-day trip in September 2015. He paraded along City Line Avenue and Market Street, met prisoners at a state prison and celebrated mass along the Ben Franklin Parkway in front of hundreds of thousands. City leaders, whether considering sanctuary city status or criminal justice reforms, still seem to ask before making policy decisions, "What would Francis do?"

Pope Francis blessed many babies during his U.S. tour but on the last day of his trip he blessed a baby dressed as the pope himself in Philadelphia. When he saw the dressed up baby, Francis seemed to laugh heartily. (Video credit: Dana Madden)

Hillary Clinton Is Crowned, Then a Women's Wave Breaks New Ground: The first woman to win a major party's presidential nomination took place at the Wells Fargo Center in South Philly on July 28, 2016. Clinton's win at the Democratic National Convention ended a week of political craziness that took over Philadelphia in the middle of a late summer heat wave. Two years later, the region delivered an arguably bigger win for women in politics when four female candidates from southeastern Pennsylvania won seats in Congress.

The final preparations for the Democratic National Convention are underway, including training sessions and tours of the Wells Fargo Center so delegates can prepare.

'Emerald City' and the Tale of Two Philadelphias: In 2017, city officials shut down one of our worst-kept secrets: a stretch of railroad running through North Philadelphia known as "The Tracks." It served for years as home to an opioid-fueled shantytown. Within months of its closure, a new, even more visible encampment dubbed "Emerald City" emerged just blocks away in the troubled Kensington neighborhood. A rise in opioid deaths and the furthering decay of Kensington during the last decade exploded into a health crisis. Could Philadelphia become the first American city to open a legal injection site? A court fight over it between local powers and the federal government will rage on into the 2020s. Meanwhile, housing prices in Kensington and many other parts of Philadelphia are expected to continue the strong gains made through the last decade.

U.S. Attorney William McSwain is threatening to close down any safe injection site in Philadelphia that opens before the Justice Department exhausts all of its appeals.

Amtrak 188 Derailment: One of Philadelphia's scariest scenes this century, a high-speed train derailment, left seven passengers dead and scores more hurt. The May 12, 2015, disaster occurred in the Port Richmond section and took more than four years for the engineer at the helm to go to trial. He was acquitted of any criminal wrongdoing. However, the 102-mile-per-hour crash could have been prevented, according to federal investigators. The lack of technology called "positive train control" along that stretch of rail prompted an increased push across the country for safety improvements.

The engineer in last year’s deadly Amtrak train crash in Philadelphia may have been distracted by radio calls, according to sources with NBC News. NBC10’s Brandon Hudson has the details.

Comcast Takes Over NYC Iconic Skyscraper, Then Pushes Philly Skyline Higher: It was a momentous decade for the Philadelphia-based telecomm giant. After purchasing NBCUniversal, Comcast eventually planted its name atop 30 Rockefeller Plaza. The July 1, 2015, branding milestone marked a new era for a corporation formerly known for its cable product. Now, it was getting into the news, broadcasting, movie and amusement park industries. In October 2018, Comcast made history in Philadelphia by opening the tallest skyscraper in the city, the Comcast Technology Center. Increasingly over the last two decades, as Comcast goes so goes the business prospects of corporate Philadelphia. That is more likely to increase in the next decade than not. (NBC10 is owned by Comcast.)

A North Philly Rap Star, An Eagles Player and A Defense Attorney-Turned-Prosecutor Up-End the Criminal Justice System: Rapper Meek Mill spent a decade on probation. His tribulations fighting a legal system more eager to keep him inside a courtroom than a free man set in motion a struggle that will likely stretch well into the 2020s. Mill's plight shined a light on the seemingly predatory practice of probation and parole for tens of thousands in the city and across the country. Philly District Attorney Larry Krasner and Eagles star safety Malcolm Jenkins are still struggling to enact changes that they believe pivots from arcane punishment to new-age rehabilitation. Old-guard institutions, including the local Fraternal Order of Police union and other DAs, think the pendulum may be swinging too far too quickly.

Malcolm Jenkins, who has toured in the country in the last year pushing criminal justice reform, appeared in the Kensington neighborhood of Philadelphia with the city’s district attorney, Larry Krasner, on Monday. Jenkins and Krasner, along with other local activists and officials, promised an overhaul to the city’s cash bail system, which they say has contributed to mass incarceration and...

Stay "Gritty" and "Trust the Process": The Flyers memelord mascot has only been around since September 2018, hard as that is to believe. His takeover of the city — sorry, Phillie Phanatic — took less than 16 months while we're still waiting for the 76ers' "Process" to produce a championship. The term dates back to 2013 when former Sixers general manager Sam Hinkie starting using it to alleviate fans' concerns about tanking for top draft picks. Those picks turned into Joel Embiid and Ben Simmons, among others. Hinkie is long gone, but the team is now among the best in the league. If (once?) they win a championship in the upcoming decade, is there a Mummers outfit big enough for the 7-foot Embiid to don on parade day?