Bullets That Struck Cops at Philly Fireworks Came From ‘Quite a Distance,' Police Say

Two police officers were struck by gunfire just as the city's annual July 4th fireworks began on Monday night. Investigators believe the bullets were likely fired far away from where the cops were hit.

The bullets that injured two police officers at Philadelphia's July 4th fireworks show on Monday night were likely fired by a gun "quite a distance away," investigators believe.

The 40-caliber rounds that struck a city police officer and a Montgomery County sheriff's deputy, who were standing 20 feet apart at the time, came from the same gun, police Chief Inspector Frank Vanore said Wednesday.

He said the bullets could have been fired more than a mile away. Those 40-caliber bullets can travel up to 2,200 yards, depending on weather conditions and shot trajectory. The evidence currently suggests that the officers were not targeted, Vanore said.

Officer Sergio Diggs, 36, sustained a graze wound to the head and a Montgomery County sheriff's Deputy John Foster, 44, suffered a gunshot wound to the right shoulder in the shooting that erupted almost immediately at the onset of the fireworks over the Philadelphia Art Museum around 9:45 p.m. Both were treated and released from Thomas Jefferson University Hospital later that night.

On Tuesday, Philadelphia's police union offered a $20,000 reward for information leading to the arrest of a suspect in the bizarre — and so far unexplained — gunfire.

“We were inches away from planning a funeral for at least one brave, Philadelphia Highway Patrol officer as a bullet lodged in his cap,” Fraternal Order of Police Lodge No. 5 President John McNesby said Tuesday while offering the reward money. “There are too many guns on our streets and far too many individuals acting recklessly with these deadly weapons."

A photo supplied to NBC10 by McNesby showed a bullet lodged in the cap of the officer grazed in the head. Inside the cap was a memorial card for a Philadelphia police chaplain who recently died.

“It is miraculous the fact that the round stopped in his hat," Philadelphia Police Department Commissioner Danielle Outlaw said.

The officer grazed in the head is a 36-year-old PPD highway patrol officer and the other is a 44-year-old Montgomery County Sheriffs' deputy, the commissioner said. Both were part of the security detail for the festival, she said.

McNesby echoed Outlaw in describing how incredible it is that the bullet stopped halfway through the cop's cap.

"The Philadelphia highway patrol officer was carrying a funeral mass card in his hat honoring our recently fallen Chaplain, Father Steven Wetzel," McNesby said. "Father Steve has always supported and counseled our officers over the years and even now he’s still working miracles for our heroes."

The gunman was not immediately arrested or identified. It was unclear if the officers were targeted or if they were struck during "celebratory gunfire" amid Fourth of July festivities, Outlaw said.

“The good news is that both officers have since been treated and released, and what really could have been a chaotic scene or a catastrophic scene wasn’t today," she said.

The gunfire broke out around 9:47 p.m. near the Philadelphia Museum of Art during the finale of the 16-day Wawa Welcome America festival as throngs of people watched a fireworks show following a concert headlined by Jason Derulo on the parkway, police said.

The shots hit the officers along the 2500 block of Spring Garden Street, behind where the concert took place, Outlaw said. Various people could be seen running from the area. Police instructed people in surrounding buildings to shelter in place.

Meanwhile, on Tuesday afternoon, Mayor Jim Kenney apologized for comments he made shortly after the shooting. He had said he looked forward to a time when he was no longer mayor. Several elected city officials called out Kenney's remarks as lacking leadership amid a gun violence crisis, including one city councilman who demanded Kenney resign.

"When I express that frustration and people respond to it the way they did, it’s understandable," Kenney told NBC10 in an interview. "But I’m still a human being and I have feelings and emotions and being mayor doesn’t make you a robot." 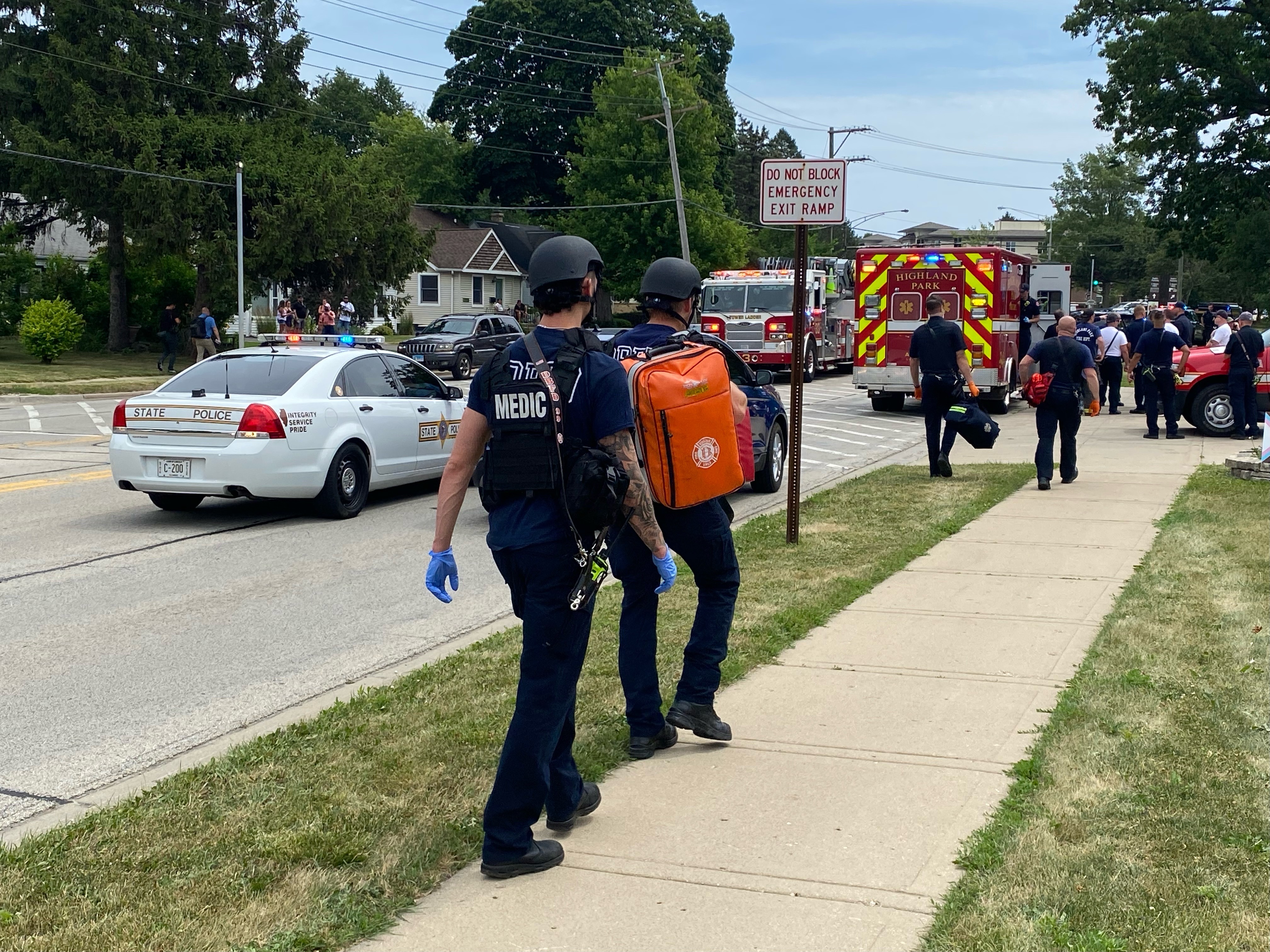 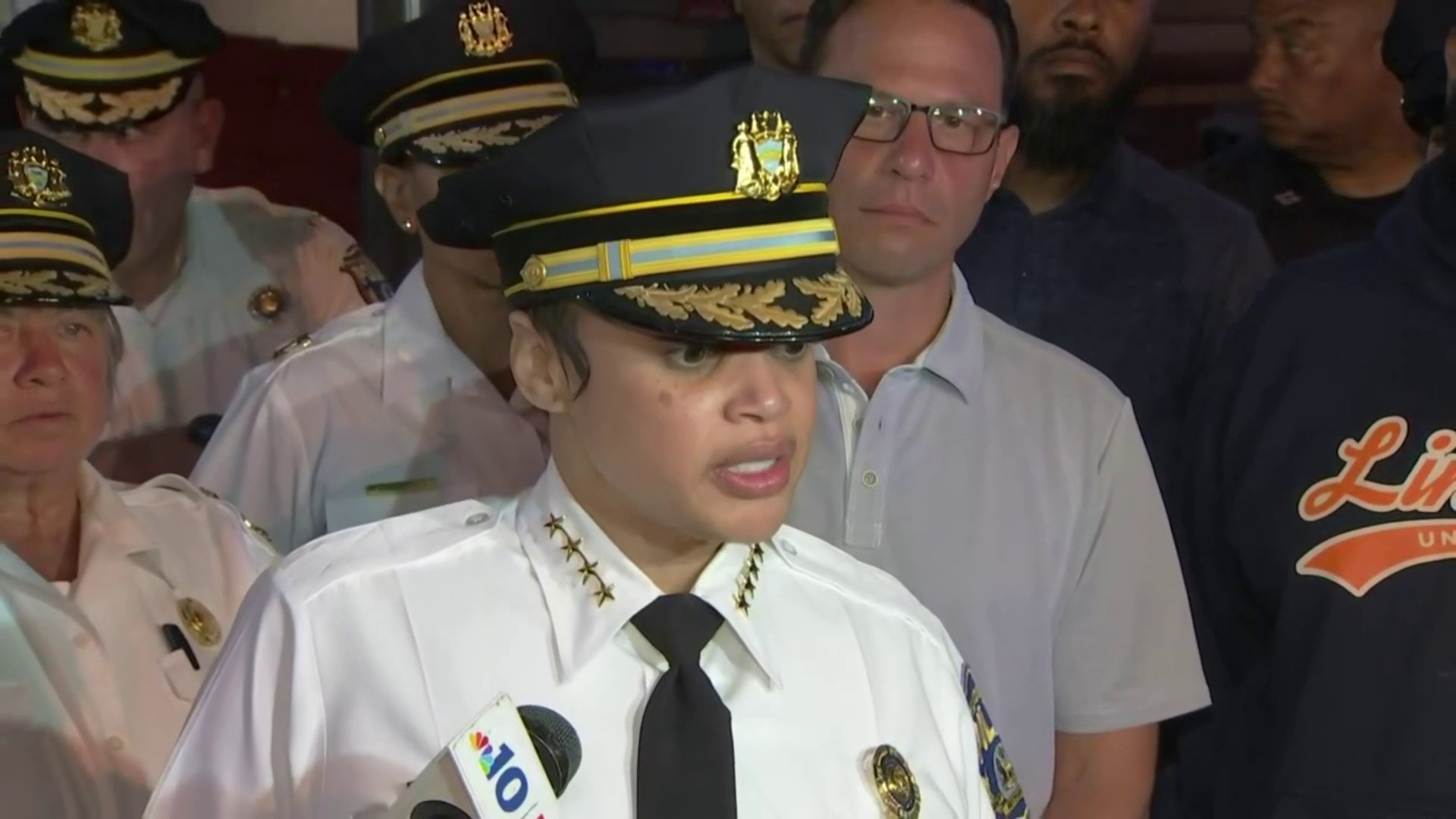 NBC10's Leah Uko was conducting an interview when people began running away from shots fired during a July Fourth celebration.

NBC10 had various reporters in the area covering the festival.

Reporter Leah Uko reported a "stampede" of people running toward the concert stage. Uko was interviewing a group of teens when an NBC10 cameraman captured the moments people, including various visibly distressed children, began screaming and scattering.

Fellow reporter Karen Hua reported laying in the dirt inside a tent with other people.

The shooting occurred the same day that a gunman opened fire on a Fourth of July parade in the Chicago suburb of Highland Park, killing six and wounding dozens more before being taken into custody.

Around 11 p.m., police officers using flashlights could be seen scouring an area from near 19th Street and the parkway up to Eakins Oval, a search that was not immediately fruitful.

Various people sought shelter at the Park Towne Place Apartments, which are just off the parkway. They asked residents to “stay calm” during police activity “on-site, throughout the community.” All towers of the complex were on lockdown "until we have further information available," the company said in an email.

Mayor Jim Kenney issued a mea culpa Tuesday afternoon to city residents after saying he is looking forward to not being in charge. His initial comments came shortly after two cops were shot at the city's July 4th fireworks show.

Residents were later allowed back in. Police officers at the complex told an NBC10 producer that their search there ended up having nothing to do with the shooting.