A massive tire blaze in Southwest Philadelphia sent a huge plume of smoke into the sky over Center City and other nearby neighborhoods Tuesday afternoon, the smell continued Wednesday morning.

You might have smelled something foul as you walked out the door Wednesday morning as the acrid smell of smoke from a large junkyard fire in Southwest Philadelphia spread into other parts of Philadelphia -- including Center City -- and South Jersey neighborhoods. The city is testing to see what toxins could be in the air.

"It's kind of like a burnt rubber that's just wafting through the air," said NBC10 reporter Randy Gyllenhaal.

"I still smell it man," Joe Jamison said Wednesday morning in Center City, where you could see a haze in the air. 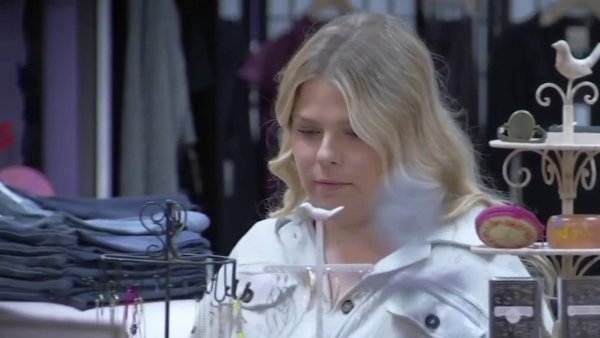 The blaze started shortly before 3:30 p.m. Tuesday at a facility in the southwest section of Philadelphia, and the black smoke reached hundreds of feet into the air and began spreading out over the city. Smoke from the massive tire fire at South 61st street could be seen for miles Tuesday afternoon -- as far away as Bucks County -- before it was eventually controlled by city firefighters a couple hours later.

A massive blaze involving a giant pile of tires sent a massive plume of black smoke over Philadelphia on Tuesday. Winds are pushing the toxic cloud toward New Jersey.

White smoke, however, continued to rise from the smoldering remains more than 14 hours later. The stink of the smoke could be smelled in Philadelphia's Center City, South Philadelphia, Point Breeze, Graduate Hospital, University City and other neighborhoods. The light winds were also pushing the stench into parts of South Jersey.

People with certain breathing concerns may want to take caution.

Philadelphia's Health Department sent out inspectors to get an air sample Wednesday night and were running tests for toxins, spokesman James Garrow said.

Later on Wednesday, the city's health department released its findings:

"The Health Department’s lab found that no toxic compounds were identified in that sample at levels that would threaten the public’s health. The compounds identified were all found at levels thousands to hundreds of thousands of times below the levels where the EPA has identified as potentially causing long-term harm.

"The biggest risk to the public from this fire is higher than normal levels of fine particles smaller than 2.5 micrometers, or PM 2.5, due to the smoke. People who are in areas of the city that are experiencing smoke or haze should try to limit their time outside. People who have heart and/or lung problems should try to not exert themselves due to the strain the smoky air might put on their systems. The smoke and haze may increase during the evening and overnight due to existing weather conditions."

Dr. Darren Mareiniss, with Einstein Health, said "It's hard to say" what the health ramifications from the smoky blaze could be "since it’s a big trash heap what exactly is in the air."

"It’s gonna irritate peoples' airways," Mareiniss said. "So I wonder about those people who have, let's say, asthma and get a whiff of this and then have bronchospasm, they have their airways clamped down because of the irritation."

You could also still see the smoke as you drove around the city Wednesday morning.

An 8 mph breeze on Wednesday morning was working against pushing the smoke out before daybreak, NBC10 First Alert Weather meteorologist Bill Henley said. A stronger breeze later in the day after a front moves through should help dissipate the smoky haze.

By 9 a.m., the smell in Center City had subsided, but folks in Delaware County reported smelling something bad.

Smoke continued to rise from the junkyard as of midday Wednesday, wafting eastward.

About 100 firefighters were battling the inferno by 4:30 p.m. Tuesday, authorities said. No one was hurt.

The cause of the fire has yet to be revealed.

This was just the latest junk blaze in the Philadelphia region in recent days: A tire fire burned in the Port Richmond neighborhood and a junkyard caught fire in West Philadelphia on Nov. 1. And, a warehouse burned in Marcus Hook on Nov. 2.