Michael White is accused of killing Sean Schellenger during the July 2018 confrontation.

During opening statements, defense attorney Jonathan Strange told the 14-person jury that his client acted in self defense after Schellenger attacked White and said he was going to "beat the black off" him.

Prosecutor Anthony Voci Jr. challenged that idea, saying White chose to carry a deadly weapon and chose to kill the victim over a traffic dispute.

”At that moment, White became a killer,” Voci said. “The only question is if he will become a convicted killer.”

Witness and surveillance video presented in court showed Schellenger pick up White by his waist as the two men scuffled. White fell backwards, causing Schellenger to flip over first onto his back and then land on his stomach. He did not get back up.

The video then showed Schellenger’s friend, restauranteur Norris Jordan, yell at White: “What are you doing? Get out of here.” 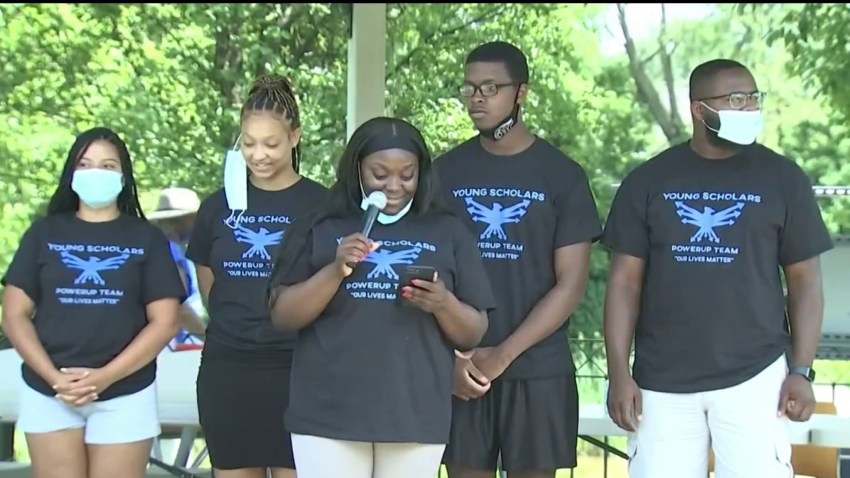 According to the video, White paused before turning to run down Chancellor Street near 17th Street.

Frame by frame replay focused on the knife White was carrying during the fight and the moment it made contact with Schellenger. The victim’s mother and other loved ones left the courtroom as the jury watched the video over and over again.

Friends and family supporting both defendant and victim crowded into the packed courtroom for day one of what could be a lengthy trail. The jury heard from five witnesses, including Philadelphia assistant medical examiner Dr. Victoria Sorokin, who performed the autopsy on Schellenger; Det. Thorston Lucke, who helped investigators piece together video evidence; Erik Peterson, an employee at Spice Finch, near where Schellenger was killed, and restauranteur Norris Jordan, Schellenger’s friend who was driving the car Schellenger rode in the night he died.

Earlier this week, prior to the jury being seated, Common Pleas Judge Glenn B. Bronson dropped the most severe charge White faced, third-degree murder.

As part of an agreement with the Philadelphia District Attorney’s Office, White was also charged with obstruction of justice and tampering with evidence. Prosecutors argued that after killing Schellenger, White ran away and attempted to conceal the knife he used to fatally stab the real estate developer.

Voci presented a photo of that stab wound Thursday morning while questioning the Philadelphia medical examiner who performed Schellenger’s autopsy. The victim’s family stifled cries as the photo appeared before them.

Sorokin testified that Schellenger died from a single stab wound that punctured his lung and aorta. She also testified that his blood alcohol content was more than double the legal limit and that he tested positive for cocaine.

White remains charged with voluntary manslaughter in the death of Schellenger along Chancellor Street near the Warwick Hotel.

The man accused of stabbing a Philadelphia real estate developer to death will now be on trial for manslaughter. A judge dropped the murder charges for Michael White before the jury selection began Monday. NBC10’s Deanna Durante has been following the latest developments from inside the courtroom.

White's lawyers have called the case a "confluence of race and class," citing disparaging racial remarks Schellenger allegedly made during the confrontation.

But on Thursday, Voci told the jury that race “had no bearing on the case.”

Demonstrators, including Schellenger's mother, gathered outside the District Attorney's Office in Center City Tuesday, accusing Krasner of mistreating the families of murder victims.

The case has been closely followed in Philadelphia.

Schellenger had been out partying with friends and was traveling in a black Mercedes when the incident unfolded in July 2018.

Earlier in the night, Schellenger had bumped into Philadelphia restaurateur William Jordan outside Rogue. They jumped into Jordan's Mercedes and were heading down Chancellor Street toward 17th Street when traffic came to a stop.

Schellenger got out of Jordan's car and exchanged words with the driver of a car that was idling in front of them.

White, who was working as a delivery man that night, rode up on his red bicycle and "inserted himself" in the conversation, witness Erik Peterson, a server at a nearby restaurant, said.

Neither Peterson nor Jordan heard what happened next, but both witnesses said White and Schellenger engaged, first verbally and then physically. Jordan said he heard White yell, "Do you want this? You don't want this."

Schellenger advanced toward White, both Peterson and Jordan said in court. The former wrestler lowered his head and shoulders and grabbed White by the waist, lifting his feet off the ground.

"It looked like he wanted to drop him in a wrestling move," Jordan said.

Jordan screamed for the two to stop fighting when he saw White retrieve a 6-inch black steel knife from his backpack.

Jordan will never know if Schellenger heard him. He continued to advance and tackled White to the ground as the knife came down into Schellenger's back.

Wounds were later found in his back ribs, left lung and aorta, according to the Philadelphia Medical Examiner's Office.

When it was over, White stood up, Jordan said. The knife was still in his hand.

White and Jordan looked at each other for several seconds, Jordan said, before White ran down Chancellor Street.

Later, the Morgan State University student turned himself into police and cooperated with the District Attorney's office. He led them to his knife, Stevenson said.