Thousands of doses of the Pfizer and Moderna vaccines are arriving in the Philadelphia region, following initial vaccinations last week of healthcare workers. The inoculation effort is expected to expand to most Americans by early next year. What could that mean for getting back to normal?

Thousands of healthcare workers across the Philadelphia region are receiving their initial doses of the coronavirus vaccine this week, the second week of inoculations in the days after the federal government approved a second vaccine.

Moderna received emergency approval by the Food and Drug Administration last Friday, joining Pfizer in the race to get millions of doses out to Americans in the coming weeks.

All of the first round of vaccinations are healthcare workers like nurses and doctors in hospitals.

The next in line are senior citizens living in nursing homes. Over the weekend, an FDA panel adopted Phase 1b of the vaccination rollout, with first responders like police, firefighters and paramedics along with Americans over 74 up after nursing home residents.

Two weeks ago, a U.S. Food and Drug Administration advisory panel endorsed the widespread use of Pfizer's COVID-19 vaccine. Then, the FDA approved the use, setting in motion the massive distribution.

After the emergency authorizations to the Pfizer/BioNTech and Moderna vaccines, about 200 million doses -- enough to vaccinate 100 million Americans -- will be shipped out in the next couple months.

Details have emerged about the rollout and distribution of the coronavirus vaccine, including tiers that determine when you'll get it and how it's being spread to all 50 states. 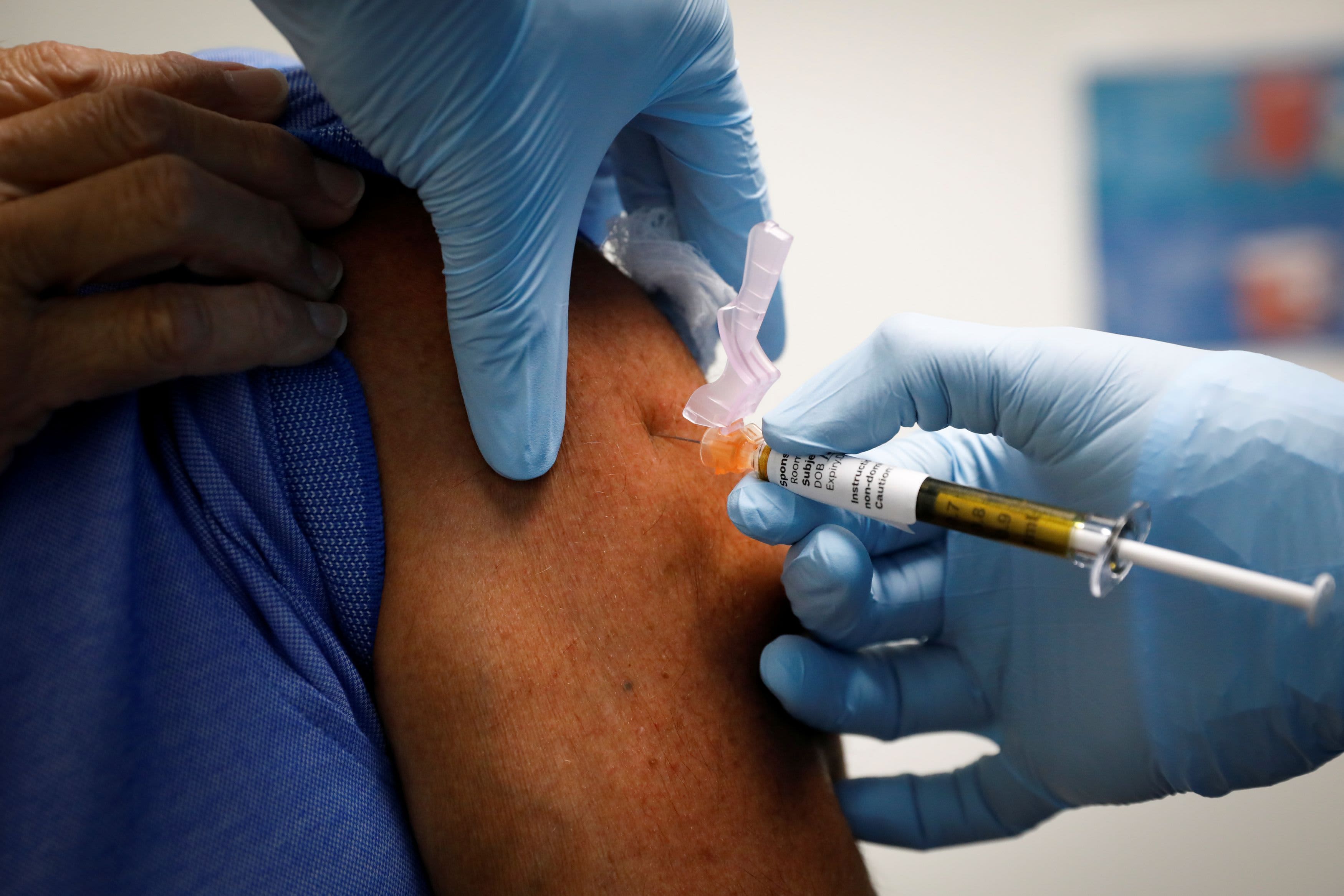 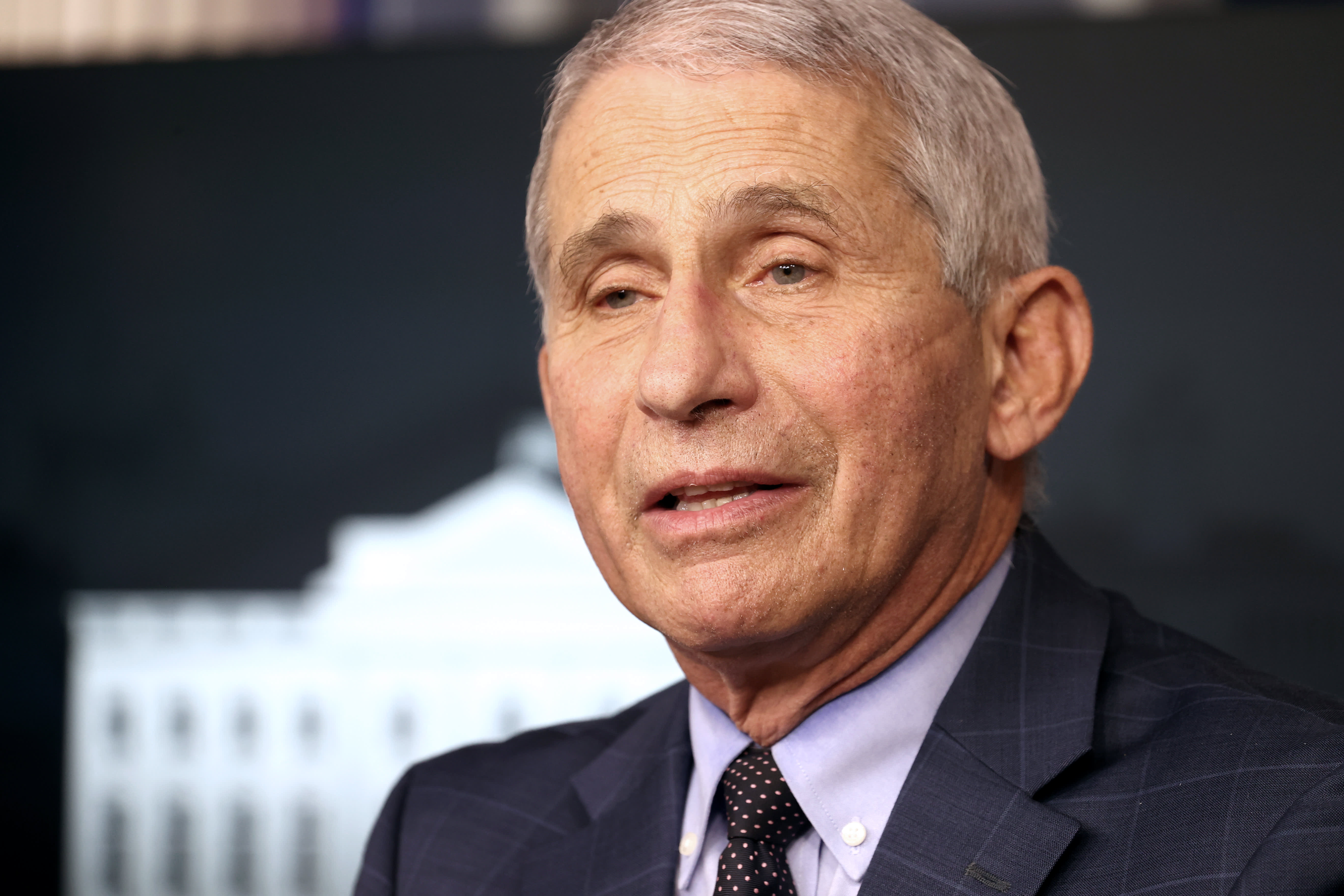 How Dr. Fauci Stays Motivated While Fighting Covid: ‘Suck It Up and Keep Going, No Matter How Frustrating It Gets'

Vaccinations in Philadelphia have begun in hospitals across the region and country. The first wave included 13,600 doses in the first week.

Gov. Phil Murphy described the vaccines as “the establishment of our beachhead. It’s going to take several more months of fighting."

Now that distribution has started, regions will get weekly shipments.

At first, there will not be enough vaccine to administer it to the general population. That's why the CDC recommended health care workers and people with critical health needs receive the first available doses.

Keep in mind: each dose must be administered in separate visits, so even the first in line for the doses will not have immediate full immunity to infection.

With still so much in flux and little federal coordination with states and local authorities since the pandemic broke out in March, here is what we do know. NBC10 will continue to update this guide as more information becomes available.

How Effective Is the COVID-19 Vaccine?

There is some usefulness to taking only the first dose, but to get the most out of the Pfizer vaccine, patients need to take both doses three weeks apart.

British officials are investigating reports that two people who received the Pfizer vaccine had allergic reactions. Medical experts say that while reactions are rare, they aren’t unheard of for vaccines of any kind and are usually short-lived.

How Will the COVID-19 Vaccine Be Distributed Around the Country?

Farley said on Dec. 15 that the beginning of vaccination "is clearly a historic moment in the biggest pandemic in history" and that vaccines would begin being administered at "most hospitals" in Philadelphia on Dec. 16. Still, there are as many as 100,000 healthcare workers and nursing home residents and employees in the city, meaning it could take weeks before they are all inoculated.

"I don’t think a couple days will make a big difference," he said.

Farley also outlined six tiers of Americans that will determine how vaccine doses are distributed and administered. The tiers are very similar to guidelines released by the U.S. Centers for Disease Control. They are:

“Clearly, all of these plans are dependent on the timing of the approval, the number of doses available, how those doses are distributed and how those populations are prioritized,” said Dr. Charles Cairns, dean of the Drexel University College of Medicine, the week before the distribution began.

Pfizer’s vaccine has tricky requirements for storage, since it must be kept at -94 degrees Fahrenheit (-70 degrees Celsius). In Philadelphia, the health department bought some ultracold freezers to help store the doses. Once unpacked and in the freezers, 1,000 doses can fit in a space the size of a pizza box, Farley said.

Moderna's vaccine is less burdensome in its travel and storage requirements because it doesn't require such low temperatures. 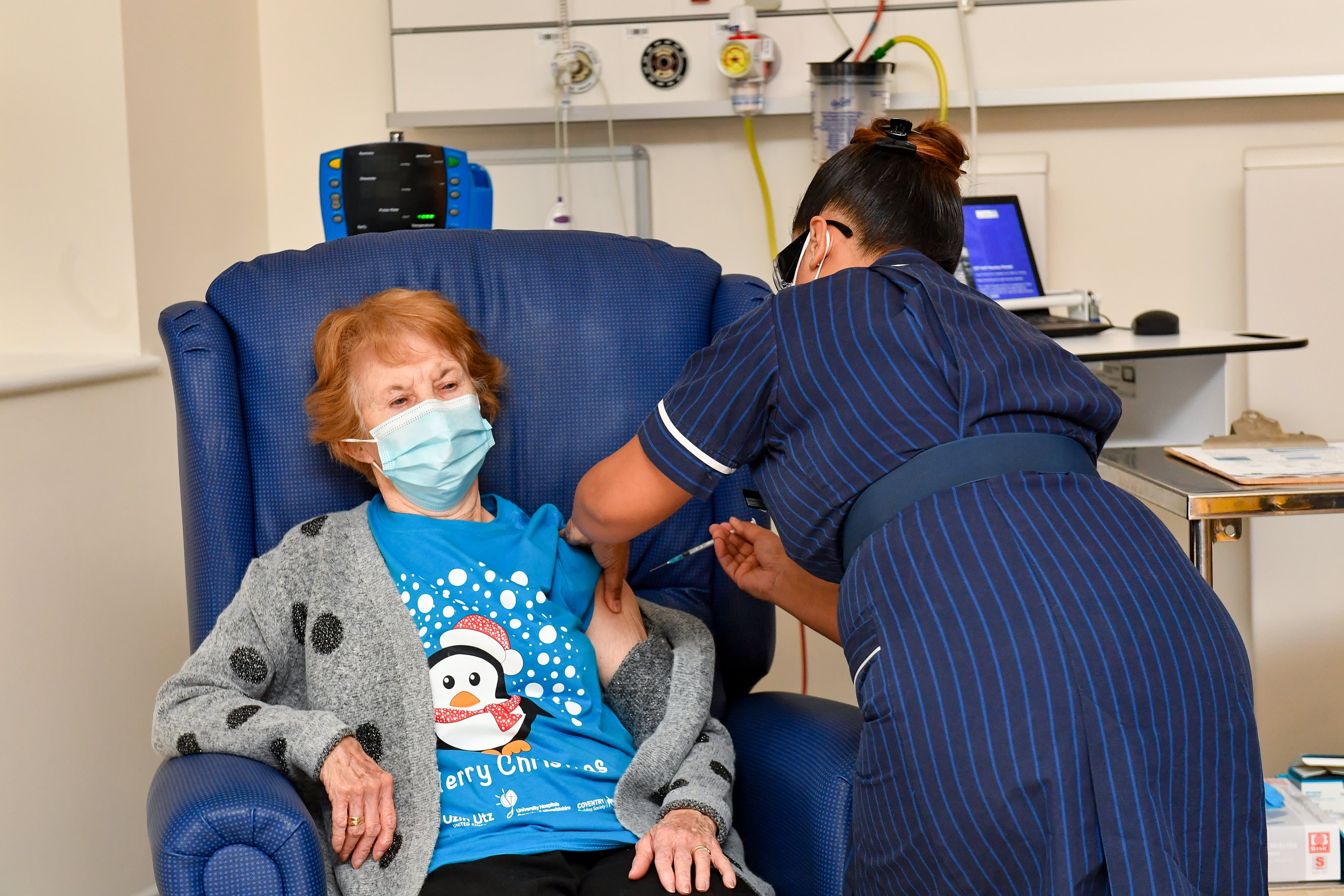 A 90-Year-Old Woman Gets First Covid Vaccine in UK, as Massive Rollout Begins 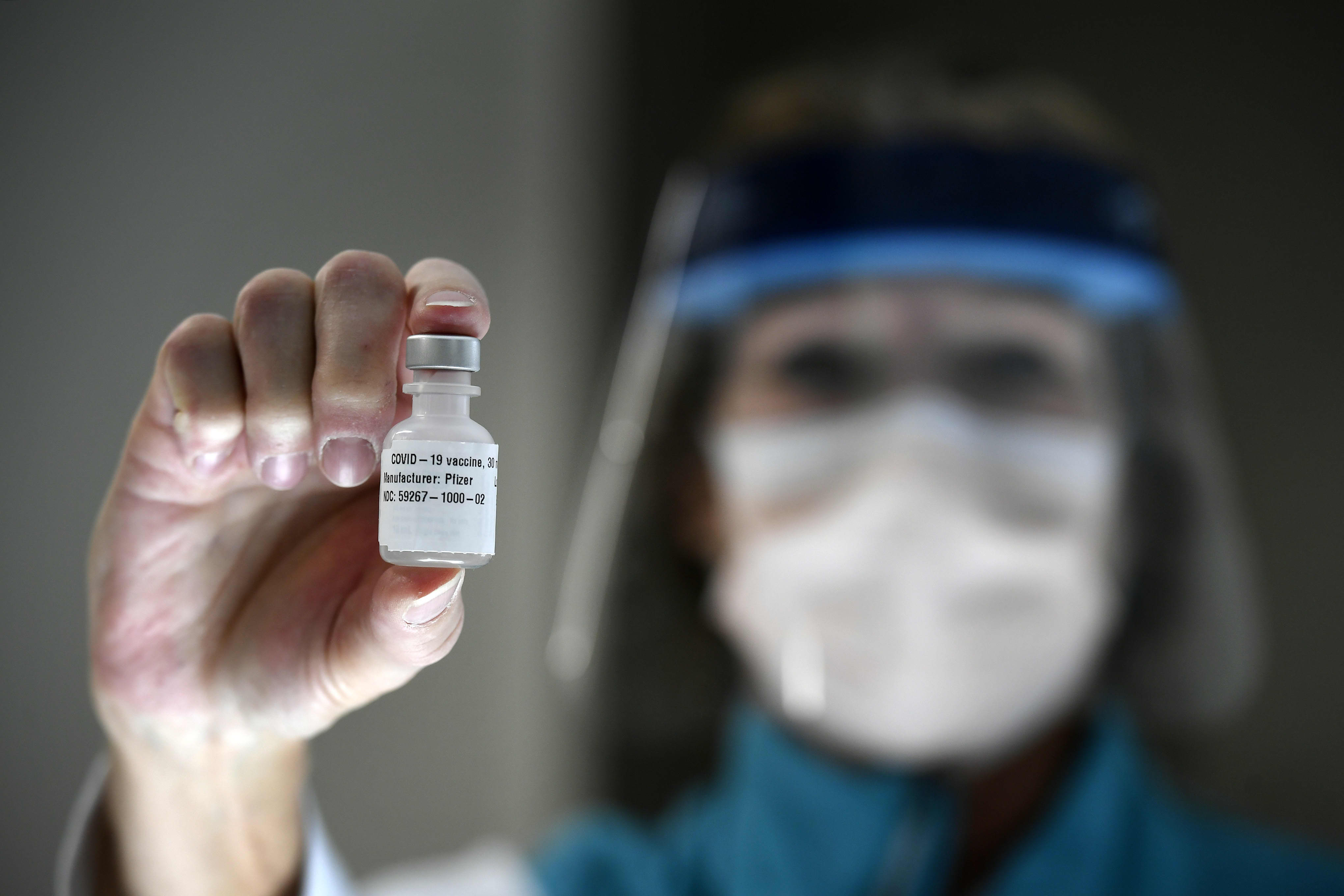 The first of Delaware's doses was given Dec. 15 to nurse Elisabeth Cote at Bayhealth's Kent campus in Dover.

The CDC says the doses come directly from the manufacturer in sealed coolers packed with dry ice.

Besides local and state governments, university hospitals and health systems could help store and distribute vaccines because they probably already have ultracold storage.

“We use them in research, and we have a need to keep things that are...very fragile, just like mRNA is for the vaccine, to keep it cold and preserve it, that’s something we’re very used to,” Cairns said.

Meanwhile, the business community is also deciding how they will eventually manage vaccination protocols and potential mandates for employees.

Who Will Receive the Vaccine First (and Second and Third...)?

NBC10 medical expert Dr. Arnold Baskies talks to NBC10's Erin Coleman and Keith Jones about what is expected as an FDA panel reviews the data on Pfizer's coronavirus vaccine. Baskies explains the process of what still needs to happen for doses to be administered.

The first people to get vaccinated are health care workers and people with critical health needs, including the elderly and people in nursing homes and other long-term care facilities, as outlined in the tiers system noted above.

Officials across our region have said health care workers and the most critical patients will receive the vaccine first, which follows guidance set by the CDC. Paul Mango, a top official in the U.S. Department of Health and Human Services, said regions don't need to follow the CDC guidelines to the letter. Local leaders could decide on their own to bump certain groups to the front of the line, like teachers for example.

Delaware initially was the most specific about how they will implement the CDC’s recommended plans to distribute the vaccine. In a document, the state listed hospital staff, EMS workers who directly deal with patients, public health staff with direct patient contact, pharmacy staff and nursing home staff among the people to receive the vaccine in the first phase.

Workers in critical infrastructure that was part of a public health emergency – for example, in the state’s poultry plants that were a driver of viral spread – will receive the vaccine in the end of the first phase.

The second phase begins when there’s a large number of doses available to meet the demand. In that phase, the vaccine will be available to anyone who didn’t get vaccinated from phase 1a/b, along with people with limited access to vaccines and people in critical industries who are working at home.

Phase 3 begins when the vaccine supply is plentiful and demand is on the downturn. At that time, the vaccine doses open up to essential workers like grocery store employees, food service, auto mechanics and more.

This will play out similarly in other states.

What Do We Know About the COVID-19 Vaccine?

Before we talk about what's in the vaccine, let’s talk about the coronavirus that causes the disease COVID-19.

Like other viruses, it’s not alive. It’s a mass of genetic material that comes with instructions on how to make more of itself, with the help of a host. See the little red protrusions here? Those “spikes” are what the virus uses to break into cells and turn them into factories for more viruses.

Your body can fight back with antibodies, which bind onto the spikes and can rip the virus apart. But that takes time.

Pfizer’s coronavirus vaccine works differently than others in medical history. In the past, a vaccine would contain dead fragments of the virus that were grown in a lab using eggs - a process that could take up to six months, said Cairns.

But instead of injecting people with dead or weakened whole virus, Pfizer’s doses use mRNA. This is genetic code that kickstarts some of your cells to create spikes similar to the virus’ main weapon.

The spikes alone aren’t thought to be harmful. But their presence is enough to get your immune system to start up its defenses - creating the antibodies that could rip a real coronavirus and its pesky spikes apart.

A vial of the vaccine contains those mRNA instructions (suspended in globs of fat to stay preserved), along with some salts and sugar. The mix is then injected into patients.

Trials have shown Pfizer’s vaccine to be up to 95% effective. Some side effects that showed up in tests of Pfizer, Moderna and AstraZeneca’s vaccines include minor inflammation, which is not uncommon, Cairns explained.

“I think that some of the side effects are expected in any vaccine. Remember, we’re using the vaccine to get an immune response from your body’s defense system,” Cairns said. “So that’s naturally going to have some inflammation. Things like fatigue, muscle aches, soreness would be expected” for some people, he added. Headaches, joint pain and even fever also showed up in a small percentage of people tested.

In the study of 42,000 people, the rate of side effects was about the same in those who got the coronavirus vaccine versus those who got a dummy shot, the Associated Press reported.

“All data suggests that the adverse reactions are mild and expected, occur in very low frequencies, and that the efficacies of these vaccines are now above 90, even 95%,” Cairns said. “This is truly a case where the benefits appear to far outweigh the risks for the broad population.”

Though experts believe the vaccine is safe for the vast majority of people, some specific groups should use caution. The U.K. put out an advisory Wednesday advising people with a history of severe allergies not to get the vaccine as they may experience an allergic reaction. That came after two members of the National Health Service experienced allergic reactions.

“Clearly, we try to give vaccines that will be applicable to the vast majority of people, but there are some individuals who truly are exceptions and need to be treated in a special way. And I think people who’ve had prior reactions or have a history of severe allergies, severe reactions, should contact their health provider first,” Cairns said.