The wildfire started in the area of Airport Road and Cedarbridge Avenue Sunday afternoon. Firefighters battled not only flames but also strong winds while trying to contain the blaze

A part-time firefighter with the New Jersey Firefighter Service was in the hospital after suffering a medical emergency while responding to a massive brush fire that ripped through buildings, forced a hotel evacuation and shut down a portion of the Garden State Parkway in Lakewood, New Jersey.

The three-alarm fire started near the Lakewood Airport in the area of Airport Road and Cedarbridge Avenue around 1:30 p.m. on Sunday.

Fueled by wind gusts of up to 40 mph, the fire ripped through two nearby office buildings before firefighters arrived.

DEP spokesperson Caryn Shinske said the two mixed-use office buildings were destroyed, along with eight smaller buildings, but added additional structures and property were damaged as well. The fire burned near the Garden State Parkway in an area where Lakewood and Brick Township meet, causing damage in both municipalities.

The fire came close to a nearby Costco and Raymour & Flanigan store but firefighters were able to bring the flames under control before it reached the businesses.

Nearby homes also suffered damage though nothing catastrophic. The fire would reach 170 acres in size by the evening.

A part-time firefighter with the New Jersey Firefighter Service suffered a "cardiac incident" while responding to the fire, according to Brian Thompson of NBC4 New York. That firefighter was taken to the hospital where he was still listed in critical condition on Monday.

A part-time firefighter is fighting for his life after he suffered a "cardiac incident" while responding to a massive brush fire in Lakewood, New Jersey. NBC4 New York's Brian Thompson is at the scene with the latest information.

The fire shut down the Garden State Parkway near milepost 89 in both directions. The Parkway later reopened. A nearby Hilton hotel on Route 70 was also evacuated. One lane on Route 70 remained closed Monday morning.

"This environment where you have wind-driven fire through heavy fuels, where fire hasn't been here in approximately 40 years and you have limited access to get in," Gregory McLaughlin, Assistant State Firewarden, said. "Our trucks are built especially to go off road, push trees over. They just couldn't get in."

Firefighters from neighboring communities were called to the scene and a helicopter was used to dump water from a nearby lake in Brick Township on the burning brush, which was fueled by strong wind gusts.

The DEP said the cause of the fire remains under investigation, but added it did not start from any prescribed burning, an effort involving small fires deliberately set by authorities to clear out flammable underbrush in wooded areas. Such efforts have been underway in the area over the last week. 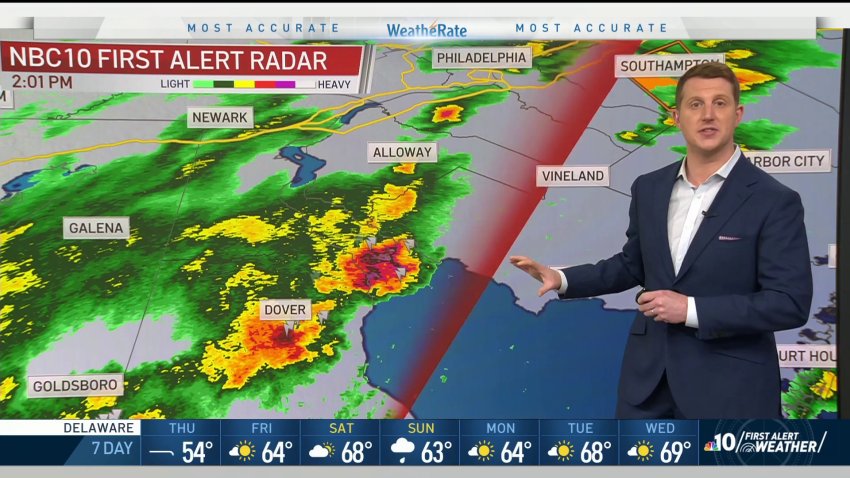 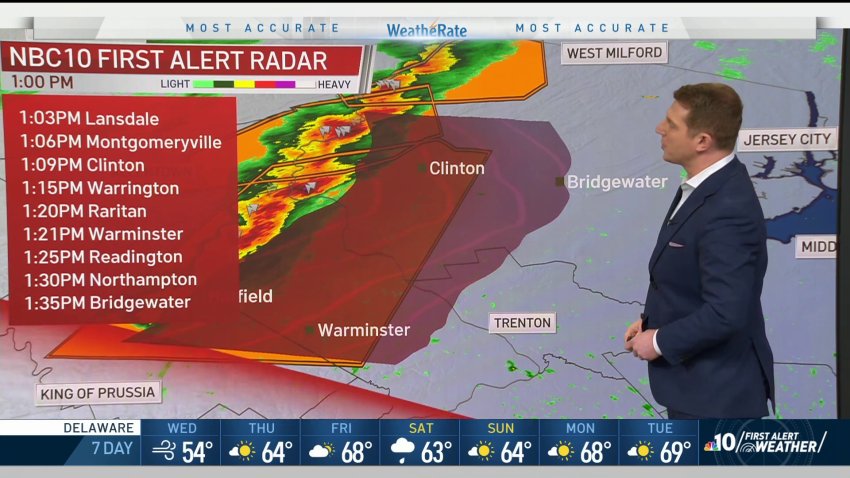 Another brush fire broke out in Carneys Point Township, New Jersey, on Sunday. There were no reports of any injuries.

The fires were fueled by powerful wind gusts and low humidity which combined to make for potentially dangerous fire conditions Sunday into Monday throughout the greater Philadelphia area.

The National Weather Service issued a red flag warning from 8 a.m. Sunday to 5 p.m. Monday for Southeastern Pennsylvania – including Philadelphia, Berks County and the Lehigh Valley – as well as most of New Jersey and all of Delaware.

The warning means there is a high danger of wind-fanned wildfires that can rapidly spread out of control.

Winds reached 35 to 40 mph Sunday afternoon and evening, with relative humidity dropping to around 20% and rising only to about 35 to 40% by nightfall. Humidity will drop once again – between 15% and 20% – on Monday, and gusts that day are expected to reach around 20 mph.

People should be careful with any outdoor burning and avoid throwing cigarette butts out of car windows, since even a small ember blown onto dry brush can spark a fire.