Powerful Winds, Heavy Rain Cause Damage and Flooding Throughout Area

Several Tornado Warnings were issued and later expired as severe storms moved through the area.

Heavy rain and strong winds caused flooding, damage and power outages throughout the region on Monday.

Several TORNADO WARNINGS were issued throughout the day as severe storms moved through the area.

The warning was in effect for Cumberland and Salem counties in New Jersey as well as Kent County in Delaware and expired at 4:15 p.m. A Tornado Warning was also in effect for Bucks and Montgomery counties but expired as well. 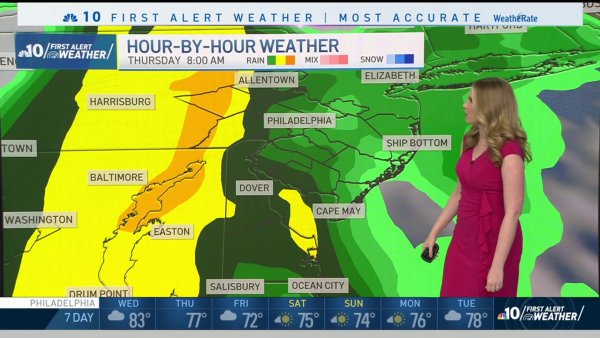 When a Tornado Warning is in effect for your area, move to a basement or an interior room on the lowest floor of your home or building. Avoid windows and if you’re outdoors, in a mobile home or in a vehicle, move to the closest substantial shelter and protect yourself from flying debris.

With four on Monday, the National Weather Service office in Mount Holly, New Jersey, has now issued 36 tornado warnings so far this year, the most ever since they began keeping records in 1986.

The National Weather Service also issued a Tornado Watch for the entire Philadelphia region on Monday afternoon that lasted until 7 p.m.

Rain was heavy at times Monday morning and continued through the afternoon and early evening. Flood warnings were issued for counties throughout the region.

"My wife comes running down the steps saying, 'Get in the basement' and then all our power went out and you hear this huge wind and little bit of vibration," Vincent Basile of North Wales told NBC10.

Storms ripped off sections of several roofs and buildings and scattered debris all over parking lots. Signs were ripped off businesses.

"I didn't realize how deep it was until I felt the water on my feet coming into the car," Christian Gray told NBC10. "So I decided to get out, jumped off the roof and hopped off."

A viewer also sent NBC10 a photo of a possible funnel cloud in Montgomery Township. The National Weather Service has not yet confirmed whether or not a funnel cloud touched down however.

Despite the damage and flooding, no major injuries have been reported.

The rain moved out by the Eagles game Monday night. A leftover shower is possible on Tuesday along with clouds and a chilly breeze.

Temperatures will stay in the 40’s on Tuesday and Wednesday while the rest of the week will be breezy and cool. Another storm may impact the area next Saturday with more rain before more chilly winds hit the area next Sunday.