Three Teens Die in Crash on Kelly Drive in Philly

Three teens died and two other people were hurt in a violent crash along Kelly Drive in Philadelphia's Fairmount Park Wednesday night.

The 18-year-old driver of a 2006 Mazda sedan lost control while going around a curve toward Center City along Kelly Drive near Ferry Road around 9:15 p.m. and slammed into a 2018 Honda SUV driven by a 65-year-old man going in the other direction, Philadelphia Police Chief Inspector Scott Small said.

The SUV slammed into the side of the sedan after it crossed into the northbound lanes near Laurel Hill Cemetery. 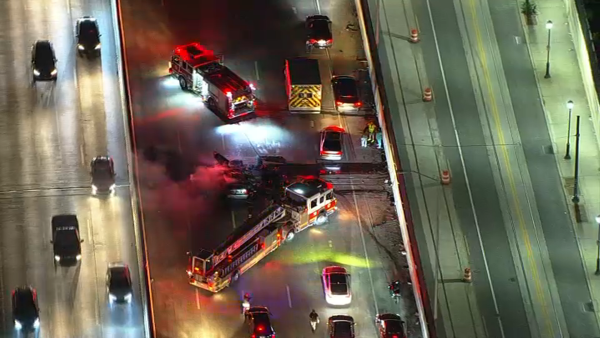 The sedan driver and a 17-year-old boy in the front passenger seat died at the scene a short time, Small said.

Two other young males in the backseat of the sedan were rushed to the hospital, Small said. One of them -- a 19-year-old -- died a couple hours later.

The fourth person in the car was being treated in critical condition. His age wasn't revealed.

The 65-year-old SUV driver was taken to the hospital in critical but stable condition, he was conscious at the time and able to walk away from the wreck, Small said.

Kelly Drive was closed in both directions at the scene of the crash.

The road reopened in time for the morning drive. However, debris was littered along the grass next to the road. Crews came out midday Thursday to clear the doors, hats, a wheel and other items.

The crash remained under investigation.

The stretch of Kelly Drive is known for drivers going faster than the posted 35 mph speed limit. It's sharp curves also make it difficult to see what's happening ahead of you.

"Make it one lane with a wide shoulder and it will slow everyone down," suggested Lisa Denberry during a run along the drive.