The Phillies are a season-high nine games over .500

There was electricity in the air at Citizens Bank Park long before the lightning arrived Thursday night. A big crowd of 35,395 showed up to see the sizzling Phillies, who came home after a 5-1 road trip -- and with four new players, to boot.

“They were definitely engaged,” Nick Castellanos said of the crowd. “They sounded really supportive. I think they were also excited about the additions we’ve made and the stretch we have coming for the last two months of the season.

“I still don’t think we’ve been as good as we can be. I think the next two months of baseball have a chance to be really, really fun.”

Thursday night sure was fun.

The Phillies beat the Washington Nationals, 5-4, in a contest that was shortened to 4 ½ innings by rain. The two teams played one hour and 39 minutes of baseball then waited out a two-hour, six-minute delay before the game was ended and called official.

They are a season-high nine games over .500.

A couple of the Phillies’ newcomers played a large role in the win.

Starting pitcher Noah Syndergaard, acquired from the Los Angeles Angels moments before Tuesday’s trade deadline, survived 11 hits and four runs over five innings and got the win in his Phillies debut.

Center fielder Brandon Marsh, picked up from the Angels in a separate deal Tuesday, had a base hit in his first at-bat with this new club. The hit started a four-run rally in the third inning that was capped by Alec Bohm’s three-run homer. Earlier, Rhys Hoskins had homered in the first inning.

Bohm’s homer against Washington starter Paolo Espino gave the Phils a 5-2 lead. With bad weather approaching, the Nationals rallied for a pair of runs against Syndergaard in the top of the fifth and were poised to score the tying run until Castellanos gunned down Yadiel Hernandez at the plate as he tried to score on a fly ball to right field by Josh Palacios.

Castellanos’ throw ended up being the last – and most important – play of the game as the skies opened moments later.

Syndergaard sure liked the play.

It got him a win.

“I didn’t understand the magnitude of how big it was until after the game,” Syndergaard said.

Castellanos helped the Phillies win Wednesday’s game in Atlanta with a tie-breaking, two-run homer in the eighth. Twenty-four hours later, he sewed up a win with his arm.

“I was telling Kyle (Schwarber), as soon as it came out of my hand, I’m like, ‘That one felt pretty good,’“ Castellanos said of the throw to catcher J.T. Realmuto. “And, obviously, him being out at the plate made it even better.”

Castellanos said he didn’t know the weather was about to turn bad when he uncorked the throw.

“Now, that’s huge,” he said. “But at the time, I was just doing anything I could to stop the damage.”

Even after allowing four runs on eleven hits, Noah Syndergaard *goes the distance* and picks up the win after a thunderstorm ends Thursday's game after just five innings. A pair of homers from Rhys Hoskins and Alec Bohm led the way for the offense in the 5-4 win over the Nationals. Hear from Rob Thomson and Noah Syndergaard after his first Phillies start, and the PGL crew dissect the win.

Bohm’s three-run homer raised his batting average to .400 over his last 29 games. He has a .417 on-base percentage and a .591 slugging percentage over that span.

The Phillies have won 15 of their last 17 games against Washington, a team that has sold off talent two years in a row. The Phils have 10 more games this season against the Nats and need to keep piling up wins. 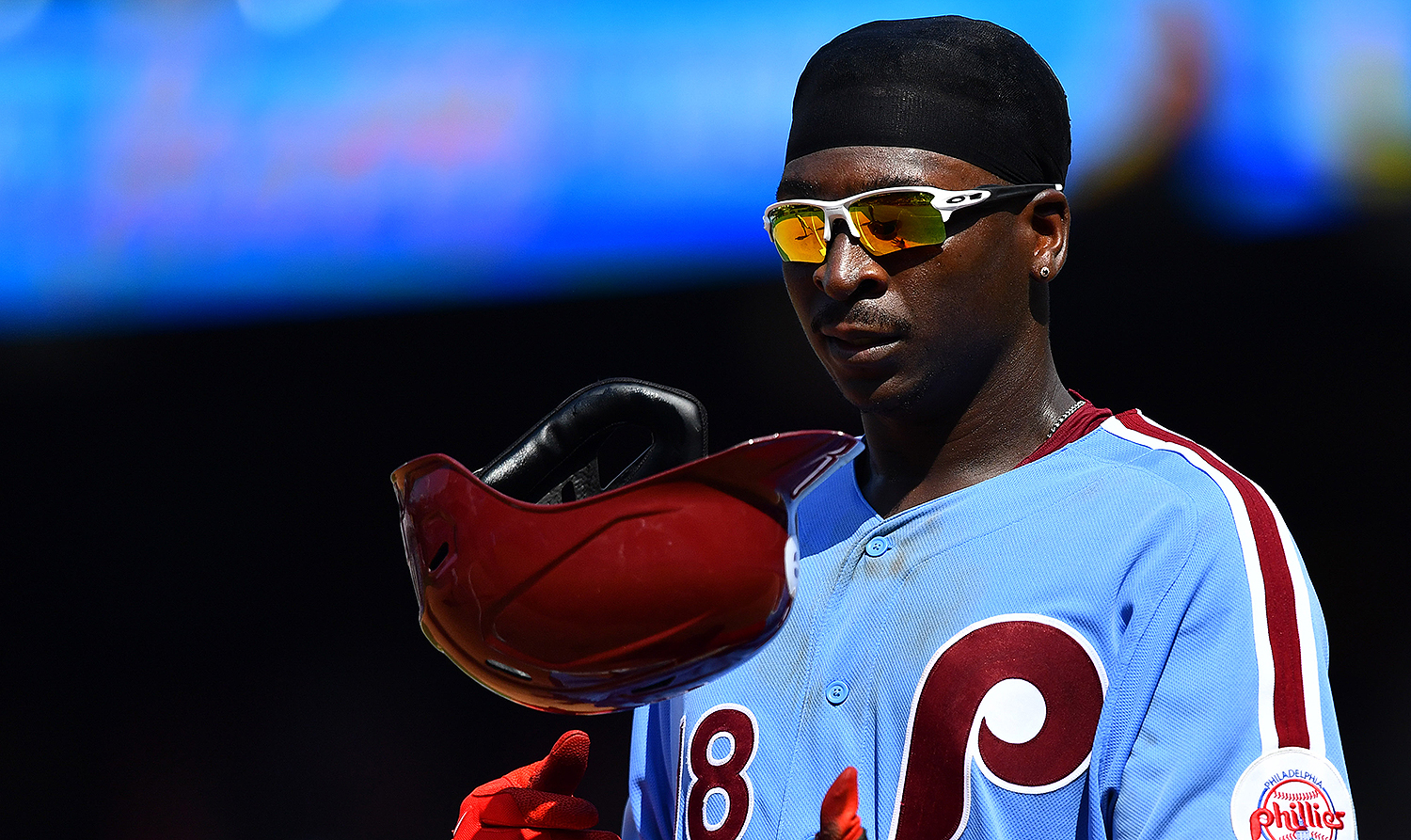 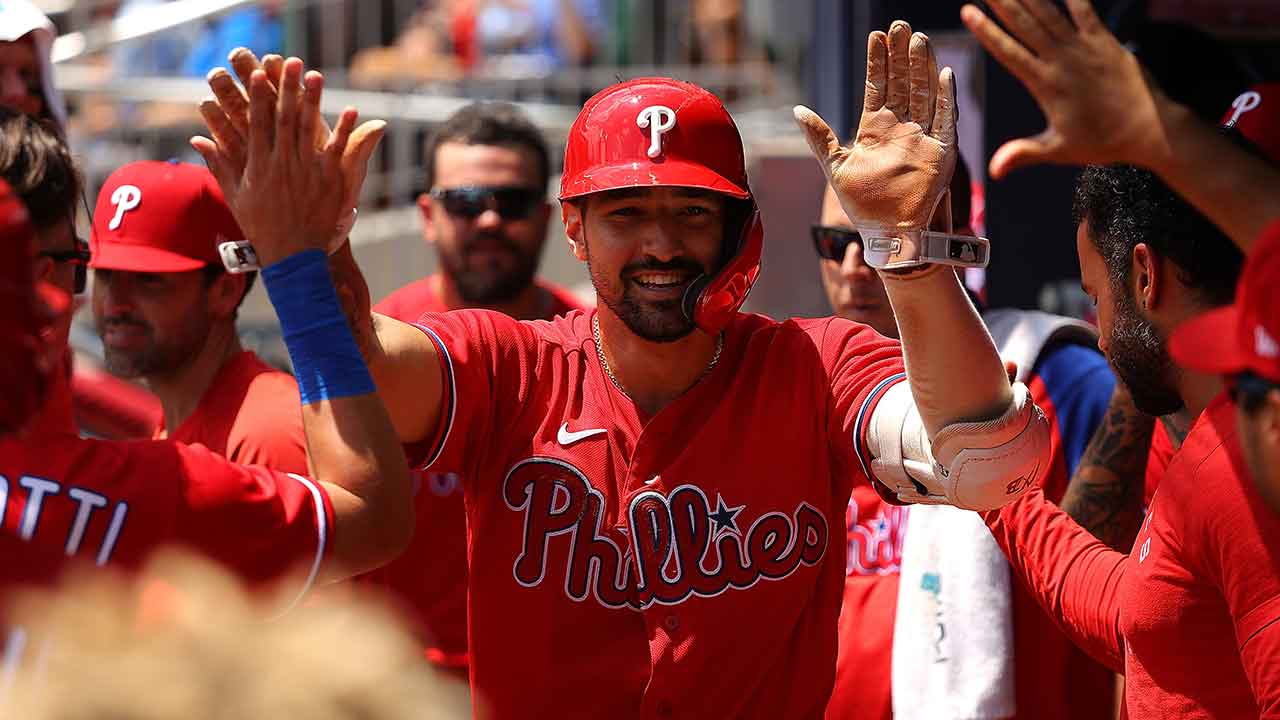 Syndergaard was acquired to bolster the back end of the rotation. Thomson believed the right-hander was rusty after not pitching in nine days.

“He battled through it,” said Thomson, who didn’t meet the pitcher until a few hours before the ballgame.

The Phillies hope Syndergaard can have an impact like Joe Blanton in 2008 or Pedro Martinez in 2009. Both were picked up to bolster the back end of the rotation in those seasons. The 2008 Phillies went 9-4 in Blanton’s starts that season and the 2009 Phillies went 8-1 in Martinez’ starts.

Syndergaard was quite familiar with pitching in Philadelphia from his time with the New York Mets. He was warming up in the bullpen when he heard his name announced over the PA system.

“Definitely, the hairs on the back of my neck stood up when I heard my name and heard the crowd," he said. "The Philly fans are very passionate. They expect greatness and expect us to win, and I have to do my part to make sure we succeed.

“Being with the Mets for a long time, I never pictured myself in a Phillies uniform. I couldn’t be more proud to wear the baby blue tonight and I look forward to wearing the red pinstripes. I’m thrilled and blessed to be in this clubhouse and with a contending team that has high expectations to make it all the way to the top.

“The personalities are amazing in this clubhouse. I just want to do my part and help this team get to the ultimate goal.”