Nearly a week after a New Jersey blast killed a woman, injured seven workers and left dozens of people homeless, the Mayor of Ewing Township released raw audio of the 911 calls that were made moments after the explosion.

On March 4, workers with Henkels & McCoy, a private contractor, were replacing electric service to a home in a Ewing Township townhouse complex on Crockett Lane. Officials with Public Service Electric & Gas say the workers accidentally struck and damaged a gas line. 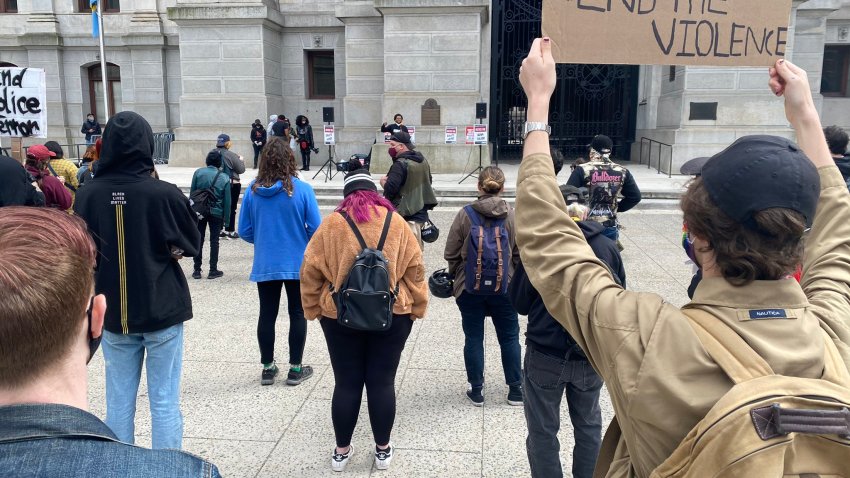 According to Ewing Township Mayor Bert Steinmann, the workers called PSE&G officials to report that they damaged the gas line. However, Steinmann claims the workers never called 911.

"Had that 911 come in at the time that the gas line was hit and if we responded, some of the response may have been a little different," Steinmann said.

About an hour after the line was struck, "ignition" occurred. The blast destroyed the home, killed the homeowner, 62-year-old Linda Cerritelli, injured seven utility workers and damaged more than 50 other houses.

Steinmann believes the workers spoke with Cerritelli minutes before the explosion.

"Whether they told her to go back in the house or get out of the house, that's still not clear," Steinmann said.

On Monday, Steinmann released audio of the initial 911 calls that were made moments after the explosion. During the calls, dozens of terrified residents report the blast to a 911 dispatcher.

The 911 operator repeatedly tried to calm the frantic callers down, assuring them that rescue units and police officers were on the way.

The seven people injured in the blast were all PSE&G workers. Officials said none of their injuries were life-threatening.

Officials say 28 people remain displaced by the explosion. According to Steinmann, PSE&G contributed $100,000 to a relief fund to help them.

"This is a tragedy from which we all will learn many lessons," the statement says. "We don't want to get ahead of the investigation so we won't be commenting further at this time."

NBC10 also reached out to a Henkels & McCoy spokesperson. The spokesperson claimed that a worker contacted a supervisor who then called PSE&G. The spokesperson did not state however whether or not the worker called 911 and claimed the company was looking into whether he followed proper protocol.

While Steinmann claimed that none of the workers called 911, last Friday he also told NBC10 that a criminal investigation in the blast was complete and that no charges would be filed against Henkels & McCoy.

"They did rule out any criminal action at all," said Steinmann on Friday. "At this particular point in time it was just an accident. Henkels and McCoy inadvertently hit this particular line. They're still investigating why it happened but there's no criminality involved there at all."

Henkels and McCoy had been fined more than $100,000 by safety regulators for problems at two other sites, but the utility said Wednesday it never had any problems with the construction firm.

The Blue Bell, Pa.-based company was cited last year by the Occupational Safety and Health Administration for violations involving signaling, warning signs and protection of workers during excavations. The company is contesting the fines.

At a news conference last Wednesday, a PSE&G director of gas construction, Mike Gaffney, expressed confidence in its contractor. He said the utility had a long-standing relationship with the firm, that it had done good work for the utility and that there had been no prior problems.

Records provided by the OSHA show that Henkels & McCoy was fined $70,000 in March 2013 for safety violations at a site in Bayonne and $42,000 for violations in Neptune in August.

The company said it was cooperating fully in the Ewing investigation.

"We are deeply saddened at the loss of life,'' company spokesman Dave Lamoreaux said. "Obviously this is a significant event for Henkels & McCoy as well. We are a 90-year-old company that prides itself on doing good, solid work in the community, and we will support the investigation in any way we can.''