A worker and patient were caught off guard when their doctor's office was raided this morning and the doctor was accused of illegally writing prescriptions for addictive drugs.

"I'm shocked. I mean, he's always, how do I put it? Under-prescribes. You know what I'm saying? He's really careful about it," said Gail Shakin, a patient of family practitioner, Dr. Liviu Holca.

Shakin showed up at Holca's office on Beacon Avenue in Stafford Township, N.J., as the Ocean County's Special Operations squad was going through the doctor's office. A woman named Jennifer who works with Holca said she, too, was taken aback by the allegations.

"I know him. I work with him. He's a nice guy. I can't connect the two things," Jennifer told NBC10 Jersey Shore Bureau Reporter Ted Greenberg, who was first on the scene and witnessed investigators carting away boxes that included "several loaded firearms, a quantity of suspected controlled dangerous substances and a significant amount of cash," according to a statement from the prosecutor's office.

According to prosecutors, Holca, 55, dispensed narcotics to undercover officers eight times between July and August of last year. Ocean County Prosecutor Joseph D. Coronato said the county is cracking down on professional dealers because prescription pills are a gateway to heroin addiction.

"No one wakes up and suddenly decides, 'today I'm doing heroin,'" Coronato said in a statement. "Abuse of prescription pills is the precursor to a life of dangerous street-level drug addition. It's only a matter of time before an addicted person's habit pushes them from high-priced pills to cheap street heroin."

According to his Physician Profile on the Meridian Health website, Holca went to medical school in Romania and was a resident at the Robert Wood Johnson Medical School at Rutgers. 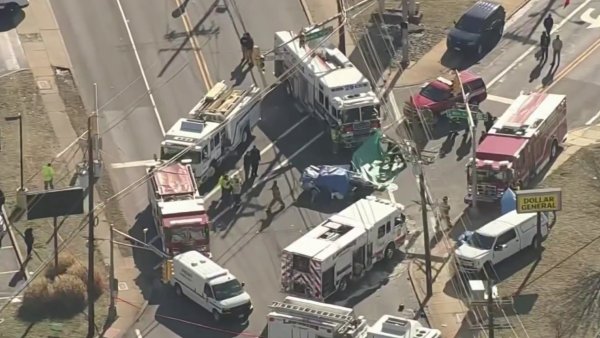 2 Dead After Fire Truck and Car Collide in NJ

Investigators said Holca was distributing Percocet and Xanax, illegally. He is charged with drug distribution, possessing marijuana, possession of firearms and money laundering. Holca was forced to shut down his practice and surrender his license to prescribe controlled substances.

Over the last six months, Ocean County officials, advocates and recovering addicts have been looking for ways to address a rapid rise in the number of drug overdoses in their area. During 2013, there were more than 100 fatal overdoses. That number is nearly double as many as 2012, according to Anthony Castellano, the Opiate Task Force chairman. When he was addressing the issue in December of 2013, Castellano called the overdose problem an emergency situation.

The task force was launched in August of last year. Its mission is to educate and train the community about prescription drugs and heroin and to ultimately reduce the number of drug-related deaths in the county.

Coronato pledged to continue the assault on doctors and pharmacists who are part of the drug problem. "Today, I include health care professionals in my warning to dealers who prey on those fighting this tragic disease -- We are looking for you," he said.

The spike in opioid-related overdoses has also become a dire concern in the Philadelphia suburbs. Fred Harran, director of public safety in Bensalem, Bucks County, has said the dramatic spike in overdoses there is directly connected to doctors over-prescribing and he likened them to terrorists.

"We're going after every source that's supplying these drugs to the street," Harran said during an interview last October.