It was only a matter of time before Monty Williams found himself another head coaching gig.

The Sixers' top assistant coach has agreed to take the head job with the Phoenix Suns. The deal is for five years, per ESPN's Adrian Wojnarowski. He also drew interest from the Los Angeles Lakers.

Brett Brown will lose yet another member of his coaching staff, but Williams will stick around until the end of the Sixers' playoff run, according to a team official. Billy Lange departed earlier this season to replace Phil Martelli at Saint Joseph's. The team did promote pro scout Lindsey Harding to assistant coach, making her the first female coach in the team's history. Jim O'Brien, who was serving in an advisory role, has also taken on more responsibilities on Brown's bench. 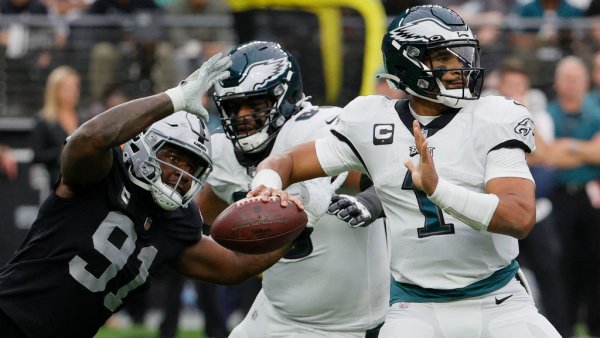 Eagles on the Verge of a Blowout Loss to the Raiders

Williams spent five years with the New Orleans Hornets/Pelicans and accumulated a 173-221 record, making the postseason twice. He was let go in 2015 and then took an assistant job with the Oklahoma City Thunder. He began his coaching career under Nate McMillan in Portland and has also served under Mike Krzyzewski as an assistant for Team USA.

In 2016, Williams' wife died tragically because of injuries caused by an automobile accident. After two years away from coaching, Williams joined Brown's staff as an assistant this season.

A former first-round pick out of Notre Dame in 1994, Williams spent nine years in the NBA. In his final season, he played in 21 games for the Sixers. He also spent time in San Antonio under Gregg Popovich.

While with the Spurs, Williams developed a relationship with Brown, who Williams in September said "was the guy that gave me a shot" as a coaching staff intern.

"Let's just start with the person: Anybody that pays attention even a little bit understands that he's elite people," Brown said Friday on a conference call. "And I think that he is an emerging relatively young coach that is incredibly relational. I think he's prideful in studying how to be an NBA coach with all the people that he's been around, with Pop - I hope that he's taken something from our program. ... I just think that Phoenix, sometimes when you hear about fit - I felt the same thing when Billy Lange went to St. Joe's, it was to me a completely natural fit. I think that from a gut feel and outside observation, the Phoenix Suns and Monty Williams are a fantastic partnership. I think he's going to be great."