A superb night from the Sixers had one blemish when a fan poured popcorn on injured Wizards star Russell Westbrook as he walked to the locker room.

The Sixers crushed the Wizards on Wednesday night, cruising to a 25-point win in what should be the death knell for Washington in this series. It was a night of incredible performances from the Sixers' Big 3, including a great assertive showing from Ben Simmons. 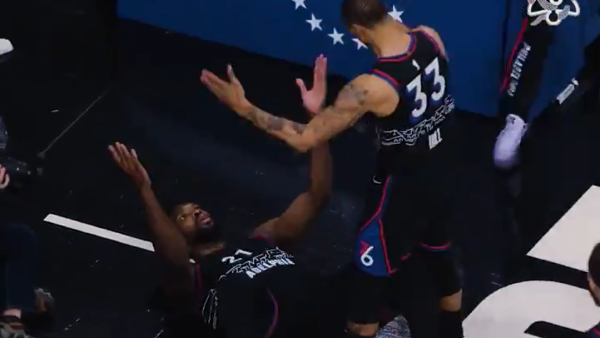 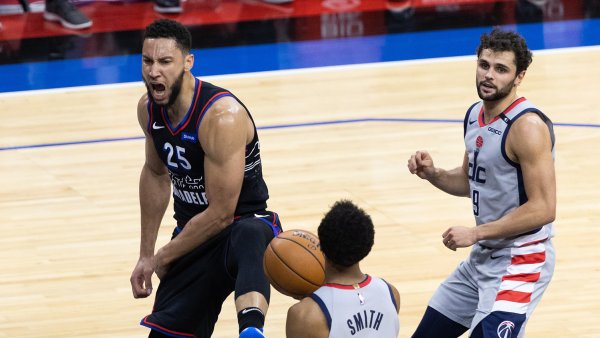 Guess what we're going to spend the next two days between Game 2 and Game 3 talking about? Popcorn.

Because of one extremely stupid, stupid Sixers fan.

NBC10' Miguel Martinez-Valle reports on the backlash over a Philadelphia 76ers fan pouring popcorn over Washington Wizards star Russell Westbrook as he left the floor with an injury during the Sixers' Wednesday night win.

Wizards star Russell Westbrook stepped on Furkan Korkmaz's foot in the second half on Wednesday and rolled his ankle. As Westbrook was heading to the locker room, the dumbest person in the Wells Fargo Center decided to act on their worst impulses and throw popcorn at Westbrook as he limped towards the tunnel.

Here's a look at what transpired:

And here's a closer look at the dingus in the stands:

This is so dumb. It's so dumb for so many reasons. Let me count them.

1. This is so dumb because a fan throwing anything, and I do mean anything, at a professional athlete while they perform their job - a job you, the fan, probably paid your own money to watch - is unacceptably stupid and is grounds to be kicked out of the arena forever. This person is working, and you're going out of your way to be cruel and just plain disrespectful. Dumb.

2. This is so dumb because of how gross it is. Throwing something at someone in this manner is demeaning in a way that the perpetrator probably can't even grasp, pretending that you're somehow above a person like Russell Westbrook while he entertains you.

3. This is so dumb because you know there are precious few sports fans who would be brave enough to do anything even 10% this stupid to Russell Westbrook's face.

4. This is particularly dumb because Westbrook was hurt. He didn't get involved in some sort of fracas, he didn't get a technical, he didn't storm off the court - and, to be clear, those would also not be cause for throwing popcorn. But the guy was hurt, and you chose to throw popcorn at him? Kicking someone while they're down? Sad, and dumb.

5. Finally, this is dumb because you're making every Philadelphia sports fan look dumb. Everyone knows the long-held stereotypes and lazy hot takes about our city's fans are outdated and untrue. Every sports fanbase has bad fans. Sports brings out the best in us, but also the worst. Now, you've allowed the entire country to point to this video of you being dumb and say, 'Hey, look, Philly really is the worst!' Great job.

This is all so dumb, and yet it will be inescapable for the rest of the week because of just how dumb it was.

"This was classless, unacceptable behavior, and we're not going to tolerate it at Wells Fargo Center," Valerie Camillo, President of Business Operations for Wells Fargo Center, wrote in a statement. "We're proud to have the most passionate fans in the country and the best home-court and home-ice advantage around, but this type of behavior has no place in our arena."