At one stage, Tuesday night’s series opener against Madison Bumgarner and the San Francisco Giants looked like it could become a disaster, as the Phillies blew an early 6-0 lead. But when the first three hitters in your lineup combine to go 11-14 with nine RBIs, it’s hard to lose (see game story).

After bashing Bumgarner, the Phillies face another ace in Johnny Cueto.  He’ll be up against Aaron Nola, who still doesn’t seem to be completely out of his prolonged slump. One good sign from his last outing, a win over the Braves, is the 12 ground-ball outs he recorded, the first time Nola reached double-digit ground ball outs in his past five starts. A sharp, well-controlled sinker is obviously essential to Nola’s success, though he won’t need to do anything special if the Phillies somehow replicate Tuesday’s offensive explosion.

1. Can the top of the order keep raking?
While the explosion from Cesar Hernandez, Aaron Altherr and Maikel Franco was great, you have to be skeptical of their ability to all have incredible games at the same time again. Still, all three hitters had a mature approach at the plate, as they all attacked their pitch and laid off the junk the Giants' pitchers wanted them to swing at. Even on nights when they’re not all in a groove, that type of intelligent hitting will serve them well.

Those three players have hardly any experience against Cueto, who sports a 13-3 record and 2.63 ERA.; combined, they have one hit in six at-bits, so they may have difficulty adjusting to Cueto’s unique, twisting windup.

In general, those hitters also substantially favor left-handed pitching. Franco has a .247 average vs. righties on the season, .300 vs. lefties, while Hernandez is .277 against righties and .352 against lefties. 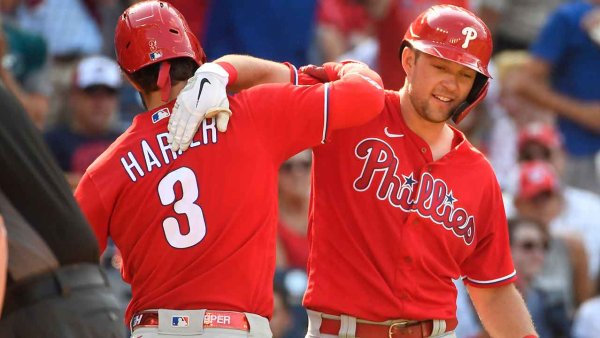 Pete Mackanin gave Odubel Herrera a night off against Bumgarner, which you can understand given his .238 average vs. lefties and the fact that Herrera has two hits in his last 13-at bats. While Herrera did get a pinch-hit knock, his average heading into Tuesday’s game was .283, the lowest it has been since April 23.

One concerning trend with Herrera is his declining plate discipline. Everybody knew that the 23-walk pace he set in April would be impossible to sustain, but it’s disappointing that Herrera’s walk totals have dropped every month since (11 in May, eight in June and seven in July). Mackanin has recently placed Herrera second in the lineup, giving Cesar Hernandez, who struggled early in the season as a leadoff hitter, another chance at the role.

On a contending team, Cesar Hernandez is not your leadoff hitter. He’s a solid defensive second base who can contribute from the bottom of the lineup. Hernandez has actually thrived in the lower order this season, hitting .335 when batting sixth through eighth in the lineup.

3. Searching for a reliable middle reliever
Edubray Ramos, Hector Neris and Jeanmar Gomez keep doing their jobs in the seventh, eighth and ninth innings. The problem for the Phillies bullpen is their lack of dependable pitchers when the starter doesn’t manage to hand the ‘pen a lead in the late innings.

Called up from Triple A for his third major league stint this season, Luis Garcia blew the lead last night, allowing two runs. The team is looking at Garcia as a possible replacement for Andrew Bailey, who was designated for assignment. Before his demotion, Bailey had a 6.40 ERA this season with the Phillies.

One of the other pitchers in the middle reliever mix, David Hernandez, hasn’t been shutting many teams down either, but at least he’s recovered from his slide before the All-Star break. Hernandez recorded a horrendous 7.71 ERA in June.

Overall, the Phillies’ bullpen ERA is 4.46, 12th in the National League. If Garcia or somebody else pitches well in middle relief, the Phillies can fill a major hole.

4. Players to watch
Phillies: Maikel Franco may have had the best night of his young career on Tuesday. Franco was 4-4 with four RBIs and a homer, his 20th of the season. If Franco had somehow managed his second triple of the season, he would have hit for the cycle. The matchup with Cueto is more difficult for him, however, since he’ll have to fight his tendency to swing wildly and pull off against breaking balls from righties.

Giants: Former Philly Hunter Pence was pretty inconspicuous Tuesday, with one hit in four at-bats. Pence returned from the DL last week after two months on the sideline with a torn hamstring, and the Giants hope he can be a crucial part of their second half playoff push.

5. This and that
•  The Phillies have a .247 collective average against Cueto. The player with the most at-bats vs. Cueto is Ryan Howard, who is 4-21 against the two-time All-Star. Mackanin may consider starting Howard over Tommy Joseph, who has two hits in his last three starts.

•  San Francisco is 10-21 vs. Nola. The Phillies righty lasted just 3.1 innings in his only start against the Giants this year, on June 26 at AT&T Park, giving up a season-high ten hits and five runs in an 8-7 Phillies loss. Left fielder Angel Pagan had a big game, with four hits and two RBIs.