Expectations of Dallas Goedert, Working With DeSean Jackson and Other Takeaways From Mike Groh

Eagles offensive coordinator Mike Groh met with the media Tuesday for the first time since last year and addressed some of the team's new arrivals, increased expectations of various players, Carson Wentz's status and several other topics.

Throwing to the backs 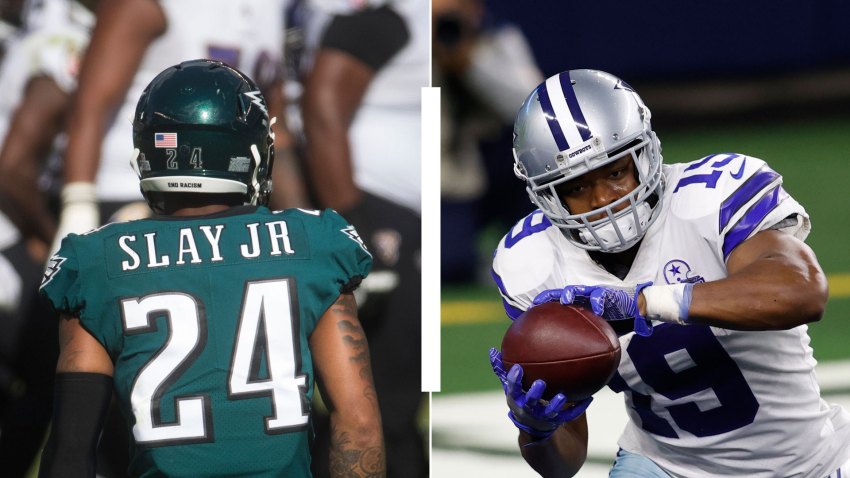 Carson Wentz Finally Has What He's Needed All Along

So far, Howard has made big strides in this critical area, Groh said.

He's done a good job catching the ball on screens and the running back check-downs and things like that," he said. "Looks like he's worked really hard at it, and he's catching the ball well. … He doesn't fight the ball and we've got to keep throwing him balls.

Miles Sanders is going to play no matter what. Howard in particular has to be able to catch the football or it's going to be tough for him to get on the field.

A lot of the Eagles' older veterans are sitting out OTAs, but DeSean Jackson, now in his 12th season, has not only been here every day, he's been here throughout the offseason.

That's crucial as he learns a new offense. This is a different guy. Older, more mature. It's huge that he's here.

He's been a joy to be around," Groh said.

We need to start looking at Dallas Goedert not as Zach Ertz's backup but as a big-time tight end in his own right. It's a lock that Ertz won't catch 116 balls again, but it's also a lock that Goedert will catch more than 33. And that will make this offense even more dangerous.

Groh on Tuesday even referred to Ertz and Goedert as "both of our starting tight ends."

This time last year, the coaches and Goedert were still trying to figure each other out. Now, they're way ahead of where they were.

We have a much better feel for his overall game, which enables you to start several steps ahead in the next season. Instead of figuring out his game, we kind of know what he does well.

That's going to translate to big-time production for the second-year tight end from South Dakota State. Fewer than 50 catches would shock me.

One ball to go around

You have Alshon, DeSean, Nelly and J.J. at wide out, Ertz and Goedert at tight end, Miles Sanders, Corey Clement and Howard at running back. That's a TON of weapons.

Groh knows it's going to be a challenge keeping everybody happy, but he said this group has been great about putting team goals ahead of individual stats, and he expects that to continue.

He added: "We want to keep enhancing everybody out there and figuring out how all these pieces are going to blend together."

And, of course, Carson

For the first time in a long time, Carson Wentz is notably not making news. Because he's practicing and he's healthy.

And Groh said that by participating in these spring workouts he's dramatically ahead of where he was last year, when he was on the shelf most of the summer.

Last year at this point he wasn't on the practice field with us. It's a bonus to have him out there with us. To be able to practice on Thursday and be able to talk about it this morning in a meeting today? Maybe making a tweak in a read here and there? He's feeling it instead of just watching the tape.