Pope to Orban's Hungary: Open Your Arms to Everyone

Pope Francis urged Hungary on Sunday to “extend its arms towards everyone,” in a veiled critique of Prime Minister Viktor Orban’s anti-migrant policies, as the pontiff opened a four-day visit to Central Europe in his first big international outing since undergoing intestinal surgery in July.

Francis, 84, appeared in good form during his short visit to Budapest, presiding over a lengthy Mass and standing as he waved to crowds from his open-sided popemobile. He used a golf cart to avoid walking long distances indoors and confessed at one point that he had to sit because “I’m not 15 anymore.” But otherwise he kept up the typical grueling pace of a papal trip despite his ongoing recovery.

Francis spent just seven hours in Budapest before arriving Sunday afternoon in neighboring Slovakia to start a four-day tour. The lopsided itinerary suggested that Francis wanted to avoid giving Orban — the type of populist nationalist he frequently criticizes — the political boost that comes with hosting a pope for a proper state visit ahead of elections in Hungary next spring.

Francis did meet upon arrival with Orban, whose refugee policies clash with the pope’s call to welcome and integrate those seeking better lives in Europe. After the meeting, Orban wrote on Facebook: “I asked Pope Francis not to let Christian Hungary perish.” 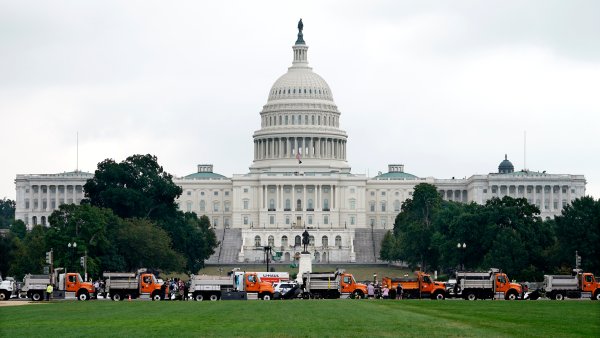 Orban has frequently depicted his government as a defender of Christian civilization in Europe and a bulwark against migration from Muslim-majority countries. In 2015, he rejected proposals to settle refugees from the Mideast and Africa in Hungary and erected a fence along Hungary’s southern border to keep out asylum-seekers trying to enter the European Union.

The Vatican said the meeting was held in a “cordial atmosphere” and lasted longer than expected — 40 minutes.

Vatican and Hungarian officials have insisted Francis wasn’t snubbing Hungary by staying for such a short time, noting that the Hungarian church and state only invited him to close out an international conference on the Eucharist on Sunday.

It was at the end of that Mass that Francis urged Hungarians to remain steadfast in their religious roots, but not in a defensive way that closes them off from the rest of the world.

“Religious sentiment has been the lifeblood of this nation, so attached to its roots,” he said. “Yet the cross, planted in the ground, not only invites us to be well-rooted, it also raises and extends its arms toward everyone.”

He said Hungarians should stay firm in their roots while “opening ourselves to the thirst of the men and women of our time.”

“My wish is that you be like that: rounded and open, rooted and considerate,” he said.

Orban had a front-row seat during the Mass. During their private meeting, he gave Francis a copy of a 1243 letter from King Bela IV of Hungary to Pope Innocent IV which informed the pope that Bela would strengthen fortifications along the Danube River in Hungary in preparation for a Mongol invasion — evidence of Hungary's long role in preserving Europe's Christian roots.

Francis referred to that history in his meeting with the country's bishops, but also urged them to preach a message of openness and dialogue with newcomers.

“Diversity always is scary because it puts at risk acquired securities and provokes stability," he said. “But it's still a great opportunity because opens the heart" to the Gospel message of loving one another.

Francis' visit and his final Mass in Heroes' Square went ahead with few coronavirus restrictions even as Hungary, like the rest of Europe, is battling new infections fueled by the highly contagious delta variant.

Few in the crowd wore masks and no tests or vaccination certificates were required to gain entrance. Some 65.4% of Hungarians over 18 are vaccinated.

Matyas Mezosi, a Hungarian Catholic who got to the Mass site early, was jubilant that the pope had come at all so soon after his surgery. The 84-year-old pope had 33 centimeters (13 inches) of his colon removed in early July.

“It’s great to see him recovered from that surgery,” Mezosi said. “Him being here in Hungary today means that he sacrifices himself to be with us, and that he feels good now.”

During the flight from Rome, Francis indeed seemed in good form. He stayed so long greeting journalists at the back of the plane that an aide had to tell him to get back to his seat because it was time to land.

Francis said he was happy to be resuming foreign trips again after the coronavirus lull and then his own post-operative recovery. “If I’m alive it’s because bad weeds never die,” he quipped about his health, quoting an Argentine dictum.

But later in the morning he apologized to a gathering of Christian and Jewish leaders that he had to deliver his speech sitting down. In his remarks, Francis warned against a resurgence of antisemitism in Europe, saying it is a “fuse which must not be allowed to burn.”

The Argentine pope called for Christians, Jews and people of other faiths to commit themselves to promoting greater fraternity “so that outbursts of hatred that would destroy that fraternity will never prevail.”

Hungary’s large Jewish population was devastated during the closing months of World War II, with more than 550,000 Jewish deaths. More Hungarians died in Auschwitz than any other nationality, and more Hungarian Jews perished in the Holocaust than from any country other than Poland and the Soviet Union.

Hungary’s government under Orban has been accused of trafficking in veiled antisemitic stereotypes, largely aimed at Hungarian-born American financier and philanthropist George Soros, whom the government frequently accuses of meddling in the country’s internal affairs.

Registered churches have been major beneficiaries of state support under Orban since he returned to power in 2010. Additionally, around 3,000 places of worship have been built or restored using public funds since 2010.