Barrett to Draw on Faith, Family in Opening Remarks to Senate

Republicans who control the Senate are moving at a breakneck pace to put the 48-year-old judge on the Supreme Court before the Nov. 3 election

Supreme Court nominee Amy Coney Barrett vows to be a justice “fearless of criticism” as the split Senate charges ahead with confirmation hearings on President Donald Trump’s pick to cement a conservative court majority before Election Day.

Barrett, a federal appeals court judge, draws on faith and family in her prepared opening remarks for the hearings, which begin Monday as the country is in the grips of the coronavirus pandemic. She says courts "should not try” to make policy, but leave those decisions to the government's political branches. She believes she would bring “a few new perspectives” as the first mother of school-age children on the nine-member court.

Trump chose the 48-year-old judge after the death of Justice Ruth Bader Ginsburg, a liberal icon.

“I have been nominated to fill Justice Ginsburg’s seat, but no one will ever take her place,” Barrett says in her remarks to the Senate Judiciary Committee. The Associated Press obtained a copy of her statement on Sunday.

Barrett says she has resolved to maintain the same perspective as her mentor, the late Justice Antonin Scalia, who was “devoted to his family, resolute in his beliefs, and fearless of criticism.” 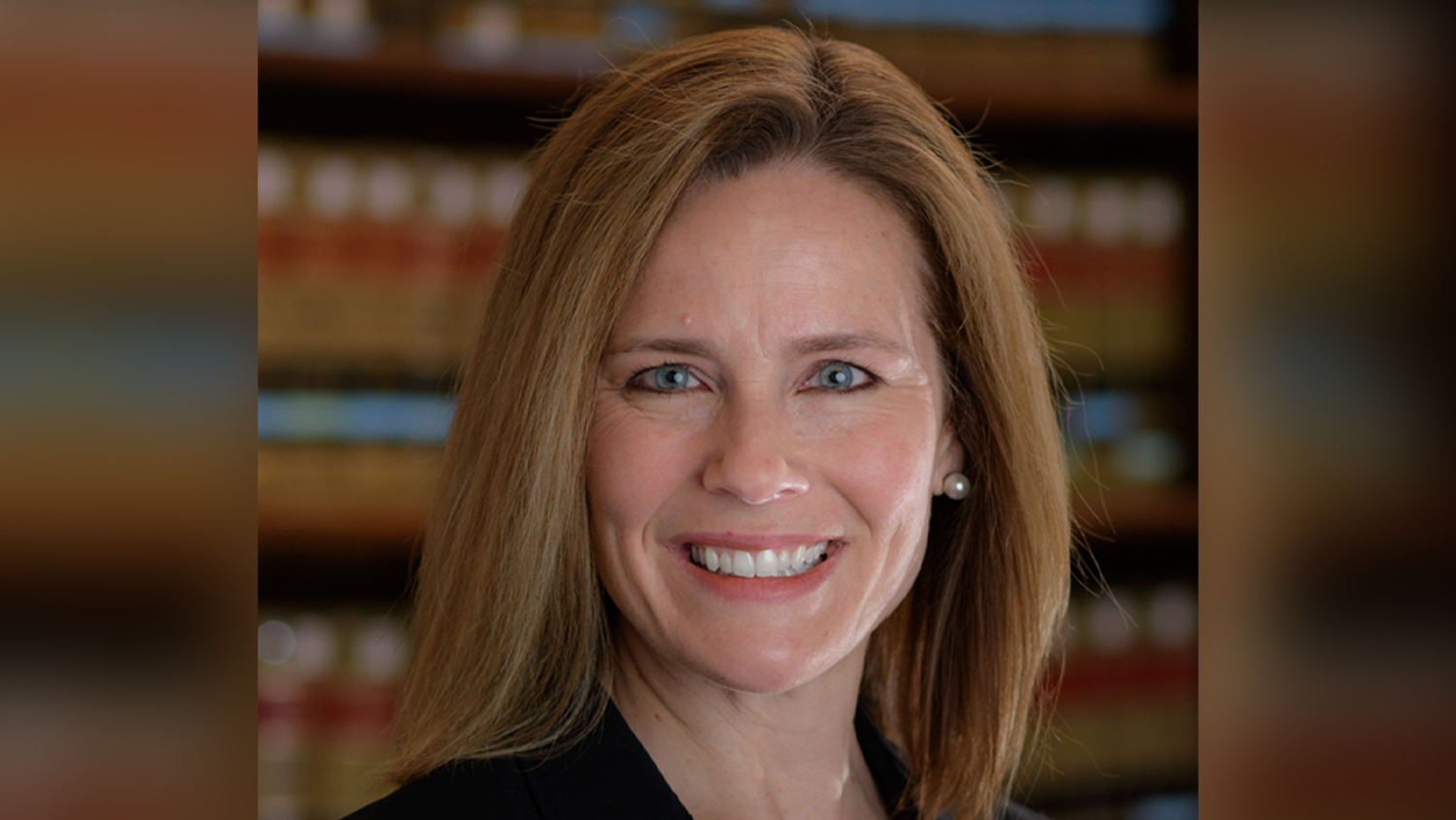 Republicans who control the Senate are moving at a breakneck pace to seat Barrett before the Nov. 3 election, in time to hear a high-profile challenge to the Affordable Care Act and any election-related challenges that may follow the voting.

Another reason for moving quickly: It’s unclear whether the election results would make it harder to confirm Barrett before the end of the year if Democrat Joe Biden were to win the White House and Democrats were to gain seats in the Senate.

California Sen. Kamala Harris, the Democratic vice presidential nominee who is also a committee member, plans to participate remotely from her Senate office due to coronavirus concerns, her spokesman said Sunday.

Harris and other key Democrats said the hearings should not move forward without plans to test people attending, including senators, for coronavirus.

Senate Democratic leader Chuck Schumer of New York told the AP that the committee’s chairman, Sen. Lindsey Graham, R-S.C., has “an obligation to be tested” for COVID-19 before the hearing begins because he has been exposed to those with the disease.

Graham told Fox News Channel's “Sunday Morning Futures” that he took a test last week. “I am negative,” he said, adding that “anybody that has a concern about showing up can virtually interview Judge Barrett. She will be there. I will be there. ...We’re going to work safely.”

The hearings are taking place less than a month after the death of Ginsburg gave Trump the chance to entrench a conservative majority on the court with his third justice.

Vice President Mike Pence and Sen. Kamala Harris, D-Calif., were asked Wednesday what they would want their home states to do if Roe v. Wade were overturned and how they would handle Judge Amy Coney Barrett’s nomination to the Supreme Court.

Democrats have pressed in vain to delay the hearings, first because of the proximity to the election and now the virus threat. No Supreme Court has ever been confirmed so close to a presidential election.

The country will get an extended look at Barrett over three days, beginning with her opening statement late Monday and hours of questioning Tuesday and Wednesday.

Barrett is telling senators that “courts are not designed to solve every problem or right every wrong in our public life.”

“Policy decisions and value judgments of government must be made by the political branches,” she said in the prepared remarks. “The public should not expect courts to do so, and courts should not try.”

A mother of seven, she also says she uses her children as a test when deciding cases, asking herself how she would view the decision if one of her children were the party she was ruling against.

“Even though I would not like the result, would I understand that the decision was fairly reasoned and grounded in the law?” she says.

A Catholic, she says she believes in the “power of prayer," and she thanks those who have reached out with messages of support.

President Donald Trump and Democratic Nominee for President Joe Biden debate their stance on filling the Supreme Court seat left vacant by the death of Ruth Bader Ginsburg and how it will effect the Affordable Care Art at the first Presidential Debate in Cleveland, Oh.

Ordinarily, she would get to show off her large family. But the White House event announcing her nomination, in which most of the audience did not wear masks, has been labeled a “superspreader” for the coronavirus.

More than two dozen people linked to the Sept. 26 Rose Garden event have contracted COVID-19 since then, including Republican Sens. Thom Tillis of North Carolina and Mike Lee of Utah, both members of the Senate Judiciary Committee.

Barrett and her family went maskless at the event. Barrett and her husband, Jesse, tested positive for the virus earlier this year and recovered, two administration officials have said.

Tillis and Lee both said they hoped to be recovered and be present for the hearing.

Democrats already were enraged that Republicans are moving so quickly after their actions four years ago kept a seat open after Scalia died in February 2016, before that year’s election, and President Barack Obama nominated Judge Merrick Garland to take his place. The Senate did not grant Garland even a hearing, much less a vote.

Outside groups are pushing Democrats to make a strong case against what they call an illegitimate confirmation so close to the election, when people are already voting in some states.

“The Democrats have a very strong hand to play politically, even if they do not have the votes to stop it,” said Brian Fallon, executive director of Demand Justice, which advocates against right-leaning nominees.

“The public is with them that this shouldn’t happen before the election.”

We know the Supreme Court is important, but how does it work? George Washington University School of Law Professor Paul Schiff Berman explains how the court functions and the ways that coronavirus has changed its process this year.

Democrats have made clear that they will press Barrett on health care, especially with the imminent Supreme Court arguments, and abortion, among other issues where her vote could push the court further to the right.

“I intend to, and I think everybody else on the Democratic side, will focus on the fact that she is being pushed on to the Supreme Court just in time for the Nov. 10 hearing on the Affordable Care Act,” Sen. Mazie Hirono, D-Hawaii, said. “That leaves millions and millions of families totally in the cold in regard to health care."

Barrett also is the most openly anti-abortion Supreme Court nominee in decades and her vote could provide a majority to restrict if not overturn abortion rights. She also has voiced skepticism about some gun control laws.

Sen. Richard Blumenthal, D-Conn., pointed to a dissenting opinion Barrett wrote last year in favor of allowing people convicted of nonviolent crimes to own guns. Federal law currently has a blanket prohibition on gun ownership by convicted felons. “She is extreme on this issue,’’ Blumenthal said at a news conference.

Republicans will highlight Barrett’s belief in sticking to the text of laws and the original meaning of constitutional provisions, both Scalia trademarks as well.

Her personal story also will be a frequent topic of conversation when Republicans are asking questions.

“She has proven a mom really can do anything,” Sen. Joni Ernst, R-Iowa, said after meeting with Barrett last week.