Democratic challenger Jared Golden is tying health care to the state's economy as he pushes to oust Rep. Bruce Poliquin

A lack of health care hits residents especially hard in Maine, with the oldest population in the country, and so the Democratic challenger in the state's Second Congressional District is focused on saddling the incumbent with his vote to kill "Obamacare," following a playbook unfolding across the country.

Asked why he thought the race was so close — the Cook Political Report puts it as a toss-up — Golden singled out Poliquin's vote and the deep cuts in Medicaid it would have brought. Maine residents have voted to expand Medicaid under "Obamacare," a step with bipartisan support that would give an additional 80,000 people health coverage.

"There is no clearer contrast in this election than that and it's not between me and Bruce, it's between Bruce and his own constituents," Golden said.

Not only does Maine have the oldest population in the country, according to the Census, an AARP survey in September found that health care was the top issue for those 50 and older.

The Second District sprawls across Maine, the largest congressional district east of the Mississippi River, a mostly rural expanse covering all but the southern part of the state near Portland and Augusta. It has an equal number of registered Democrats and Republicans, and more voters than either without a party affiliation.

Poliquin has represented it for two terms, but before he won the seat in 2014 it was held for 20 years by Democrats. President Donald Trump took the district in 2016, following Obama four years earlier. The race is one of the most closely contested in the country. According to the Center for Responsive Politics, which labeled the contest a "hot race," Golden outraised Poliquin $4.6 million to $3.7 million and has outspent the incumbent. 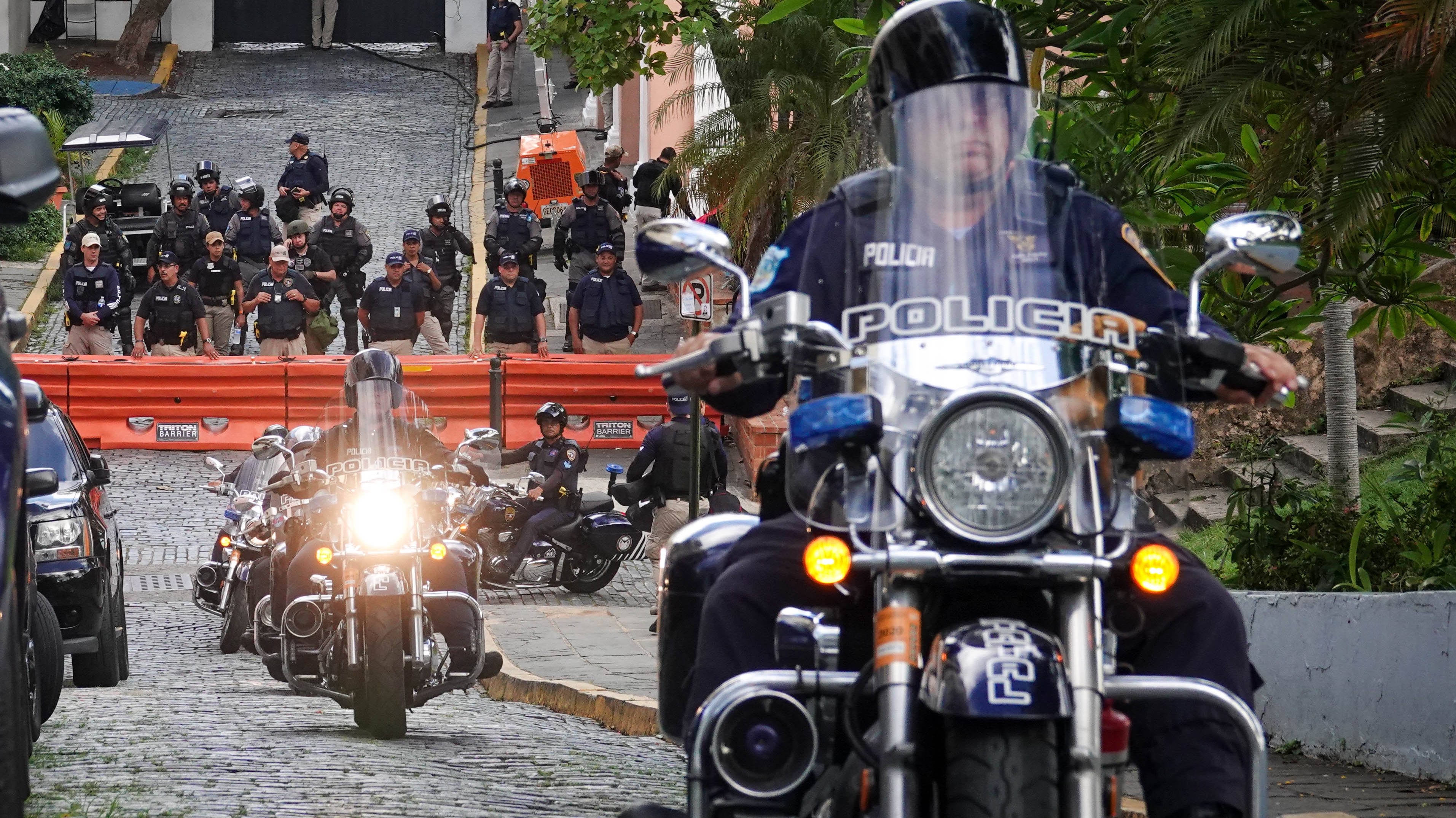 5 Shot to Death at Public Housing Complex in Puerto Rico

Outside money also poured in, putting the election on track to be the most expensive congressional race in Maine history, according to The Associated Press.

This article, part 8 in a series, examines one of the key battleground races for control of the House of Representatives in the Nov. 6 midterm elections. Carried by grassroots momentum, Democrats must take 23 seats from Republicans to win the balance of power. They are contending with Republicans' experience and organization, and an outspoken but polarizing president.

Poliquin, 65, is a third-generation Mainer who worked in finance before returning to Maine, according to his House biography. He did not respond to a request for an interview.

In an August 2017 recording leaked to the website Maine Beacon, Poliquin can be heard saying he rarely agrees to interviews, saying, "It would be stupid for me to engage the national media, to give them and everybody else the ammunition they need and we lose this seat."

Golden, 36, is a former Marine who served in Iraq and Afghanistan, enlisting after the Sept. 11 terrorist attacks. He worked on national security issues for the state's Republican U.S. senator, Susan Collins, and is now in his second term in the Maine Legislature, where he is the assistant House majority leader.

Golden is emphasizing two main Democratic issues, health care and the Republican tax cuts, which he ties together to dispute his opponent's assertion that Maine's economy is benefiting from the GOP tax reform bill.

"The two go hand in hand because we've lost a lot of our good middle-class manufacturing and mill jobs," Golden said.

Last year, the Maine Hospital Association estimated that the state's hospitals received $200 million a year from insurance subsidized by "Obamacare."

Golden has argued that Medicaid expansion would bring almost $500 million in federal investment into the state's economy and create 3,000 new jobs. At the same time, one in five people in Maine is on Medicaid. He says the country needs to move toward a universal health-care system like Medicare for all.

Medicaid expansion has been a contentious issue in the state. Voters in both of Maine's congressional districts approved the move by referendum after Republican Gov. Paul LePage repeatedly vetoed the Legislature's attempts to do it. LePage argued that there were insufficient funds.

Poliquin first voted against repealing "Obamacare" in 2015, saying that he believed a replacement plan first needed to be in place. He changed his vote last year, approving a move to repeal and replace it with the Republicans' American Health Care Act.

He said afterward that he knew that the House bill needed work — it would have stripped 24 million Americans of health insurance by 2026, according to the Congressional Budget Office — but had hoped it would be improved by the Senate. Instead, it failed there with Collins' help.

At a debate in October, Poliquin pointed to his first vote against ending "Obamacare" and said, "Everybody in this country needs to have health care. And everybody needs to be able to afford health insurance in order to get that care."

Poliquin says he would protect residents with pre-existing conditions, but the plan he voted for would have driven up their premiums.

"Health care is a huge issue in this election, as much as any one issue is, and Poliquin has votes to explain away, which he has not done yet," said L. Sandy Maisel, a political science professor at Colby College.

"Enter Jared Golden — of the district, the opposite of Wall Street, a veteran who can field dress a rifle, plain talking, close to his roots," he said. "While progressive on some issues, he can sell himself to the district. In fact, I would argue he is the perfect Democrat for this district — if he cannot beat Poliquin, no one can."

Poliquin touts a career creating jobs. He's a member of the House Financial Services Committee who served as Maine's treasurer and who says the district is benefiting from his efforts to bring about less red tape, lower taxes and fairer trade deals. He's also called Golden a young radical with a socialist agenda.

Golden counters that his record shows anything but a socialist. He described himself as a labor Democrat, who supported tariffs on softwood lumber, for example. He said he would work with Trump when he could, as he has with Maine's governor on allowing returning military members with a medic background to get licensed as a nurse.

Golden said that to improve the economy, he would emphasize investing in infrastructure — revamping utilities, focusing on renewable energy to bring down Maine's high energy costs, rebuilding roads and bridges and improving rail lines. Low employment does not equal a successful economy, he said.

Poliquin has attacked Golden on his gun record, too, comparing his A rating from the National Rifle Association to Golden's D rating. Poliquin says on his website that he supports the state's "long outdoor traditions including firearms ownership," and that he defends the Second Amendment.

Golden supported legislation allowing courts to confiscate weapons from domestic abusers, opposes a ban on semiautomatic rifles but would back a debate about whether to limit high-capacity magazines.

James Melcher, a professor of political science at the University of Maine at Farmington, said Poliquin was helped in past election years by ballot measures connected with firearms — on restrictions on bear hunting in 2014 and on more stringent background checks in 2016. There is no similar ballot initiative this year.

On Tuesday, Maine will use what is called ranked-choice voting for the first time in a federal race, a system in which voters pick candidates in order of preference. If no candidate gets more than 50 percent of the vote — and there are two independent candidates, Tiffany Bond and Will Hoar — the one with the fewest number of first-ranked votes is eliminated and those ballots are assigned to each voter's second choice. The process continues until there is a winner.

"Because the race is close, even a few voters could flip over," Melcher said.

Democrats have tried to portray Poliquin as someone who does not really fit the district, he said, and cited an ad in 2016 in which a suit-clad actor meant to be Poliquin struggles with a kayak.

"Mainers are very, very willing to split their ticket for somebody with whom they feel personally comfortable, especially at the local level, so that sense of fit I think is important," Melcher said.

Calista Cross, 76, is voting for Golden. She likes his military background — she said she has helped to erect two memorials to veterans — and his position on health care. The governor and Poliquin have not done much to ensure affordable health care for residents, she said.

Cross, who lives in Cornish, dismisses accusations that Golden would not be a supporter of Second Amendment gun rights, but others among his supporters fear the issue might hurt his chances.

Maryanne Forbes, a 62-year-old retired nurse who lives in Hanover and who has been making telephone calls on Golden's behalf, said he needed to make a clearer statement about his positions. Voters she has spoken to believe he will try to take away their rifles and their ability to hunt, she said.

"They're not going to vote for him," she said. "They like him, they think he's a good candidate — but the guns."

Sharon Sibley, the vice chair of the Lincoln Town Council and the office manager of her family-owned logging company, Hanington Bros. Inc., backs Poliquin, citing his support for legislation that has benefited the logging industry.

Poliquin opposed the creation of a national monument in Maine's North Woods under Obama and agreed with a recommendation from Interior Secretary Ryan Zinke to allow trees to be cut there. He also has introduced legislation that would allow 16- and 17-year-olds to work in logging operations under parental supervision.

"I think experience plays a huge role, his experience as a business owner," said Sibley, 53.

She said she would support Medicaid expansion provided funding was available. The company's group insurance premium for 32 employees rose 34 percent this year and 29.4 percent last year, she said, and employers cannot absorb those kinds of increases plus a tax increase to support others' insurance.

"It's going to take more than one man and one president to fix health care," she said.

Professors Maisel and Melcher agreed that Trump did not seem to be much of a presence in the race, but Cross was quick to accuse the president of stirring hate by repeatedly attacking people.

"Trump is a bad influence," she said.

Golden, who said he was not running a campaign against Trump, argued that voters were fed up with the country's extreme partisanship. He has been endorsed by nonpartisan PAC With Honor, which backs veterans of both parties with the goal of moving away from the political divide.

"We are trying to push a message that we've got to get beyond this deep partisanship and get back to the kind of environment where we're all thinking about things as Americans and not as some member of a political party," he said.

—Nathalie Sczublewski and Sam Hart contributed to this report.