Philly Jesus Kicked Out of Installation Ceremony for New Archbishop

Hours after being kicked out of the installation ceremony for new Philadelphia Archbishop Nelson Pérez and cited for trespassing, Philly Jesus spoke out and defended himself

Hours after being kicked out of the installation ceremony for new Philadelphia Archbishop Nelson Pérez and cited for trespassing, Philly Jesus spoke out and defended himself.

“Even though I don’t identify as any particular denomination in the body of Christ, I am a sincere child of Christ,” he said.

Grant told NBC10 he was dressed in his signature robe while watching the ceremony.

“There were all these other types of people. I see people with their white robes on. I looked like I was a part of them,” he said.

Grant said that after about 20 minutes, he was approached by a police officer or security guard who told him that “they” wanted him to leave the church.

“I said, ‘Who are they?’ I said it very politely. I wasn’t disruptive at all,” Grant said. “I said, ‘I’m a priest.’ He said, ‘You’re not a Roman Catholic priest.’ I’m a universal priest. Jesus said those who believe in Him, His sincere children, are prophets, kings and priests. It doesn’t matter if you’re sitting in the pew. You have the same authority as a priest or a Pope.”

Grant said more officers surrounded him and told him repeatedly to leave the church.

“I just kept standing my ground,” he said. “I brought up my religious rights.”

Grant told NBC10 the officers then carried him out of the church.

“They dragged me out like head first through the double doors,” he said. “They actually dropped me and I scraped my head.”

Video surfaced of Grant sitting on a curb while handcuffed and speaking with two police officers. In the video, the officers tell Grant he’d be issued a violation for trespassing.

Philly Jesus was kicked out of the installation ceremony for new Philadelphia Archbishop Nelson Perez and cited for trespassing. NBC10 obtained video from the Philadelphia Inquirer of Philly Jesus in custody.

“I forgive you for trespassing against me,” Grant replies in the video.

Grant was issued a citation for trespassing and later released.

“The whole thing is bogus,” Grant said. “It’s a disgrace how I was treated. I was extremely embarrassed. It was a horrible feeling.”

Grant told NBC10 he plans on taking legal action and believes he was unfairly targeted.

“They were just hating on me,” he said. “But Jesus said, ‘Hater’s gonna hate.’ He said that in John Chapter 15, verse 18. Jesus said, ‘If the world hates you, remember it hated Me first.’” 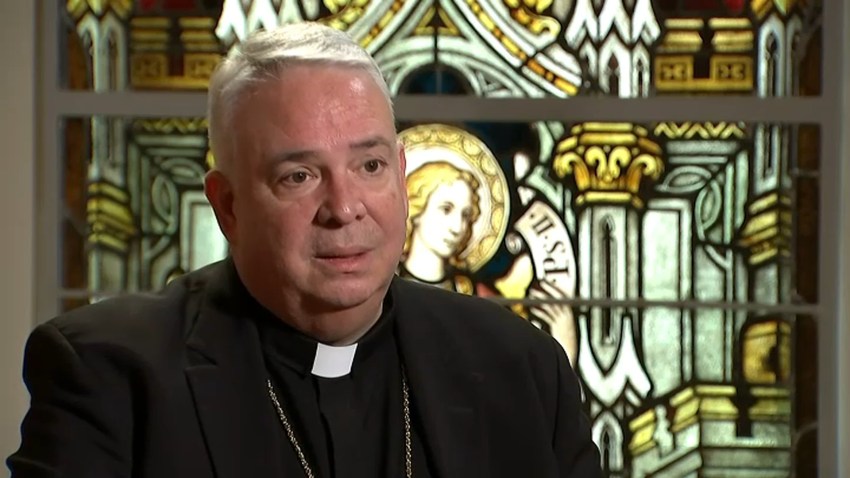 Grant, who turned clean several years ago after battling heroin addiction, has been a popular figure among tourists in Philadelphia. He told NBC10 he took on the Philly Jesus persona nearly seven years ago after finding Christ while being treated in a court-ordered program.

In 2014, Grant was taken into custody after being confronted by a Philadelphia police officer at LOVE Park due to accepting money for photos. In 2016, Grant was arrested after being accused of trespassing at a Center City Apple store.

Despite the arrests over the years, Grant told NBC10 he still has love and respect for Philadelphia police.

“I forgive all of you,” he said. “And I thank you all for your service. God bless you. Thank you for all you guys do. I love you guys.”