One of the largest wildfires on record in New Jersey raged for days in Wharton State Forest near the Mullica River. A shift in the wind turned its smoky blume toward South Jersey and southeast Pennsylvania.

Light smoke from a New Jersey state forest fire wafted over much of the great Philadelphia region on Wednesday after a shift in wind directions pushed the plume west, and some residents in Pennsylvania could see the haze and smell it too.

Much of the wildfire, which broke out Sunday in Wharton State Forest, was under control by Wednesday morning. For three previous days, the flames ripped through 13,500 acres of the little-populated Pine Barrens in Burlington County.

But winds from the southeast began early Wednesday and pushed the smoke toward populated areas around Cherry Hill in South Jersey and Philadelphia in southeast Pennsylvania. Light smoke created hazy conditions in the Manayunk section of the city's northwest.

"If the fire is to your southeast, you're going to smell the smoke," NBC10 meteorologist Bill Henley said late Wednesday morning. "The southeasterly wind is bringing the smoke inland. That wind will be with us this afternoon and tonight as well."

But Henley said stronger winds in the afternoon were expected to dissipate the smoke more. He added that no air quality alerts were issued for the Philadelphia region, so there was little concern for any health risks related to the smoke.

Meanwhile, the wildfire itself is dying out, according to aerial views by the NBC10 Skyforce10 helicopter Wednesday morning. Video shows only a small portion of the fire still burning. The New Jersey Forest Fire Service said Tuesday that firefighters had made "substantial progress" containing the flames.

Skyforce10 photographer Jeremy Haas said that even after most of the fire appeared to be out, the area of the forest that had burned the previous three days still smoldered. He said smoke still rose from the area where flames were no longer visible.

"It almost looks like a fog coming out of the trees," Haas said.

An illegal campfire deep in the woods has been determined as the cause of the massive forest fire in New Jersey, officials said Wednesday.

While officials said they are confident they can keep it from substantial spread, residents across South Jersey can expect to see smoke for the next week as firefighters continue to put out hotspots. 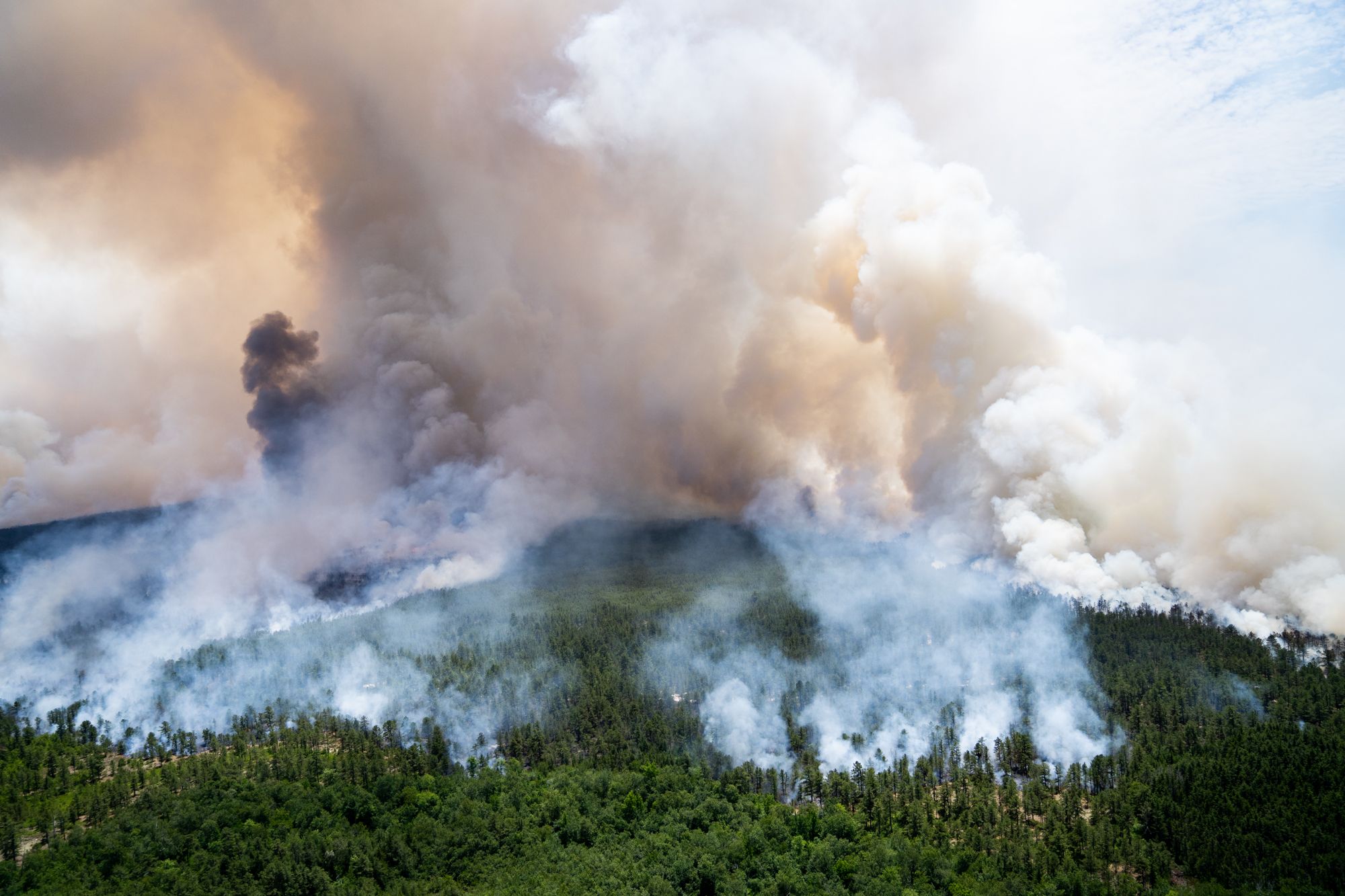 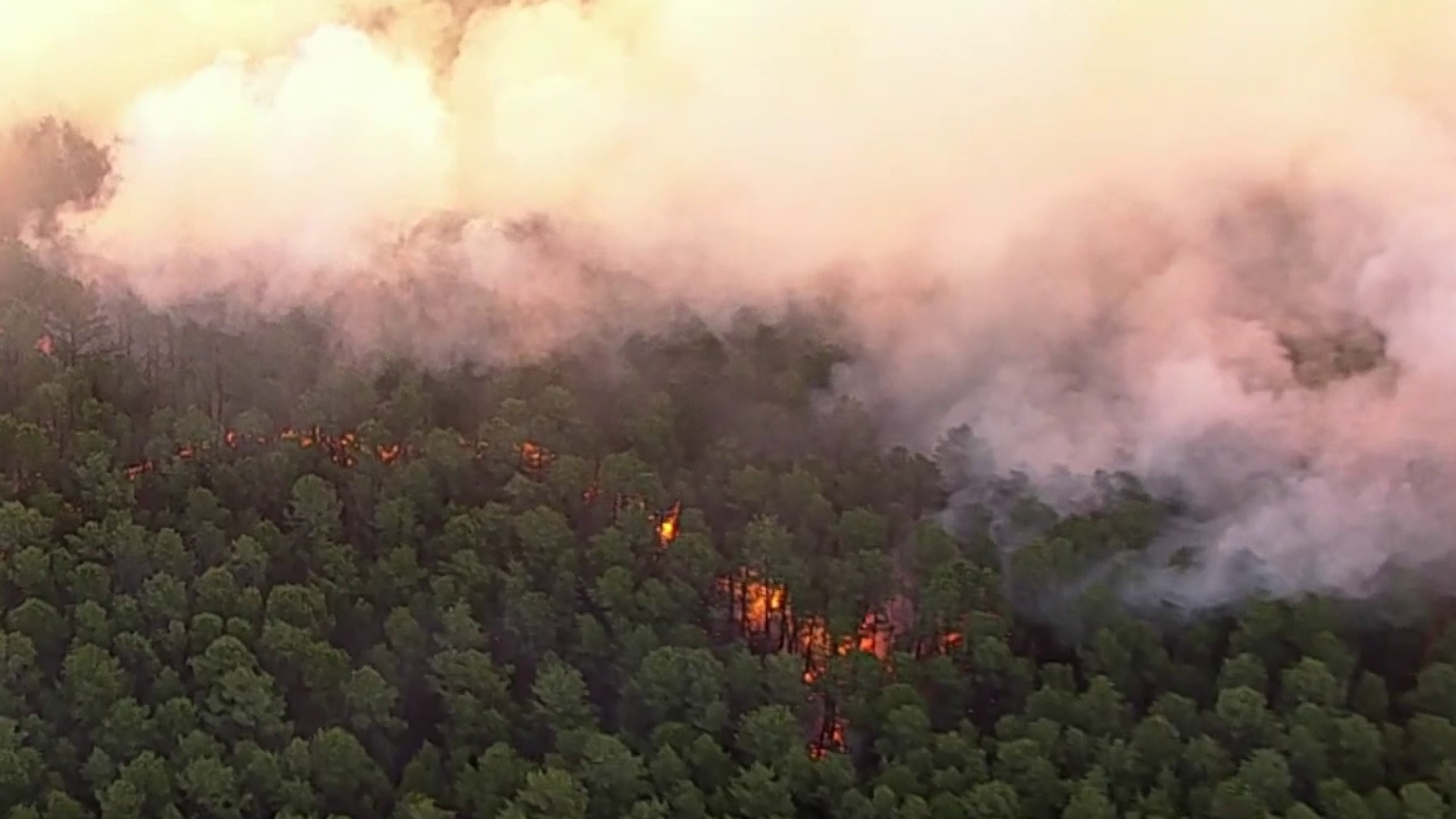 The forest fire service said the blaze is the second largest forest fire in the Garden State since 2007.

On Tuesday morning, a layer of thick white smoke could be seen covering the air above the burning forest.

Firefighters have started to make progress in containing a massive blaze in New Jersey’s Wharton State Forest that has been burning for more than 36 hours. NBC10’s Brian Sheehan has the story.

The fire, which was being fueled by dry and breezy conditions, began Sunday morning just after 6 a.m. in a remote section of the forest along the Mullica River in the Pine Barrens area. Monday morning, thick white smoke and flames could be seen as firefighters continued a backfiring operation to contain the blaze, which spanned areas of Washington, Shamong, Hammonton and Mullica townships.

New Jersey's “General Forest Fire Act" requires that before having any fire within a forested area, citizens must contact the nearest forest fire service office to request a permit. They may also need a permit from the local fire official or NJ Division of Fire Safety.

The New Jersey Forest Fire Service defines a wildfire as an uncontrolled fire burning the different types of vegetation that cover the land. A wildfire is considered a “major wildfire” when it exceeds 100 acres in size.