On March 11, 2020, the American public finally began to come to grips with a stark reality: the toll of the novel coronavirus would be unavoidable for months to come, perhaps longer.

For nearly two months, health and government officials had been sounding the alarm about the virus as it infected and killed thousands of people around the world, pinballing from China to Italy and beyond before striking Seattle in the first deadly outbreak in the U.S.

Then-President Donald Trump had repeatedly sought to downplay the severity of the threat, telling people: "It will go away, just stay calm."

But the events that unfolded on March 11 forced the nation to snap to attention as the World Health Organization declared the coronavirus a pandemic, cities began limiting gatherings, school closings mounted and major sporting events were canceled. 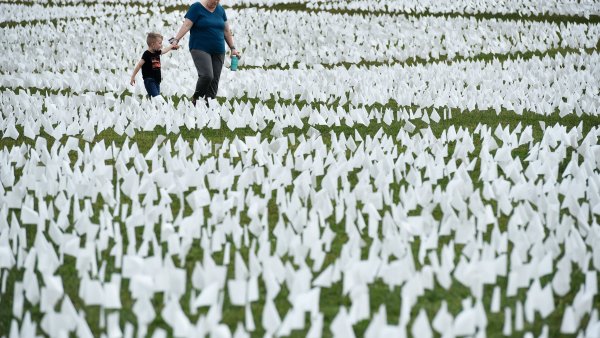 Thursday marks the one-year anniversary of the COVID-19 shutdowns that rocked the U.S., a day that began in one reality and ended in a virtually new one. President Joe Biden will mark the occasion with a prime-time address to the nation.

A look back at the events that unfolded on that fateful Wednesday in March:

Dr. Anothony Fauci Testifies That 'It's Going to Get Worse'

Testifying before the House Oversight and Reform Committee, Dr. Anthony Fauci, director of the National Institute of Allergy and Infectious Diseases, warns that the outbreak in the U.S. is going to get worse.

Fauci explains that when there's enough community spread in an outbreak — meaning the proliferation of an illness whose source of infection is unknown — "then it becomes a situation where you're not going to be able to effectively and efficiently contain it."

"I can say we will see more cases and things will get worse than they are right now," Fauci says at the Wednesday morning hearing, which features testimony from other federal health officials involved in combatting the outbreak. "How much worse we'll get will depend on our ability to do two things: to contain the influx of people who are infected coming from the outside, and the ability to contain and mitigate within our own country. Bottom line, it's going to get worse."

The hearing is abruptly paused as he and other high-level officials rush back to the White House for meetings.

WHO Declares COVID-19 a Pandemic

WHO Director-General Tedros Adhanom Ghebreyesus addressed the media Wednesday and asserted that he now thinks it is appropriate to characterize COVID-19 as a pandemic.

An hour later, the World Health Organization announces the new coronavirus outbreak "can be characterized as a pandemic," applying the term for the first time to COVID-19, the disease caused by the virus.

"We have called every day for countries to take urgent and aggressive action. We have rung the alarm bell loud and clear," says Tedros Adhanom Ghebreyesus, the WHO chief.

By using the charged word "pandemic" after shying away from calling it so earlier, the U.N. health agency seeks to shock lethargic countries into pulling out all the stops. WHO defines a pandemic as the worldwide spread of a new disease for which most people do not have immunity.

By midday, San Francisco Mayor London Breed announces via tweet that the city will prohibit all gatherings of 1,000 people or more.

The ban is effective immediately and represents the city’s latest effort to slow the spread of the new coronavirus.

Washington Gov. Jay Inslee also bans events of 250 people or more in the Seattle region, home to some 4 million people, through at least the end of the month. At this time, the Seattle area accounts for about two-thirds of the nation's coronavirus deaths, including at least 19 from the same suburban nursing home.

Inslee's order forces Seattle-area sports teams to respond with contingency plans, with some canceling or postponing scheduled events, while others announce they'll continue to play without fans in the stands.

Sports and Entertainment Events Are Postponed or Canceled

With San Francisco banning large gatherings, the Golden State Warriors announce their scheduled March 12 contest against the Brooklyn Nets will be played without fans. The team's home arena, the Chase Center, cancels all events through at least March 21.

The NCAA follows suit, announcing the men’s and women’s basketball tournament games will be off-limits to the general public while the Ivy League, the athletic conference of eight universities including Harvard University and Princeton University, says it has decided to cancel all upcoming competitions and practices through the remainder of the academic year.

With the battle to stop the virus from spreading intensifying, New York City and Chicago cancel their St. Patrick's Day parades, the Paley Center for Media's annual television festival, Paleyfest, is postponed and late night comedians and daytime talk shows make plans to film without live studio audiences. Production on CWs "Riverdale" is halted and the 41st season of CBS's "Survivor" is delayed.

From UCLA to the University of Vermont, the number of colleges and universities canceling in-person classes and moving the rest of the semester online begins to mount.

The Seattle Public School system says it will close for at least two weeks for its 53,000 students. In the New York City suburb of New Rochelle, where a cluster of cases could be one of the worst outbreaks in the nation, public schools also shut down.

Tom Hanks, who is currently in Australia, announced the news via Instagram.

Hollywood icon Tom Hanks announces that he and his wife have tested positive for the virus.

In an Instagram post, the actor says he and his wife Rita Wilson are down under in Australia and began to experience fatigue, chills and slight fevers, which are all symptoms of the COVID-19 disease caused by the new virus.

"To play things right, as is needed in the world right now, we were tested for the Coronavirus, and were found to be positive," Hanks reveals to fans. "We Hanks’ will be tested, observed, and isolated for as long as public health and safety requires."

NBA Suspends the Season After Player Tests Positive for COVID-19

The NBA released a statement Wednesday saying it was suspending the season until further notice after a Utah Jazz player tested positive for coronavirus.

Just as the Hanks news is bouncing around the internet and on people's phones, the NBA announces it is suspending its season until further notice after a Utah Jazz player tests positive.

The test result is reported shortly before tipoff for the Utah at Oklahoma City game. Officials inform the team coaches that the game has been canceled and players on the floor warming up are told to return to their locker rooms.

Meanwhile, confused spectators at Chesapeake Energy Arena in Oklahoma aren't immediately aware of the cancellation. As officials mull over how to break the news, singer Frankie J, who was slated to perform during halftime, puts on a show. As he walks off the court, fans are told the game has been postponed "due to unforeseen circumstances."

"The NBA is suspending game play following the conclusion of tonight’s schedule of games until further notice," the league said in a statement sent shortly after 9:30 p.m. ET. "The NBA will use this hiatus to determine next steps for moving forward in regard to the coronavirus pandemic."

President Donald Trump said Wednesday the U.S. would suspend travel from Europe, with the exception of the United Kingdom, for 30 days to curb the spread of coronavirus. After Trump's address, the U.S. Department of Homeland Security said the restrictions only apply to foreign nationals and not U.S. citizens, green card holders or the family of U.S. citizens. He also called on Congress to provide Americans payroll tax relief.

After downplaying the threat of the virus for days, President Trump announces from the Oval Office that he is sharply restricting European passenger travel to the U.S. and moving to ease the pandemic's economic costs.

In his prime-time address, Trump declares that he is cutting off travel from 26 European nations, except the United Kingdom, to the U.S. beginning at midnight on March 13. The month-long restrictions won't apply U.S. citizens, green card holders or the family of U.S. citizens. Trump says the U.S. would monitor the situation to determine if travel could be reopened earlier.

"We are all in this together," Trump says.

After a Pandemic Year of Isolation, Hope Is on the Horizon

The Day That Changed Us All: A Year of COVID-19 in Photos

Twelve months later, more than 531,000 Americans have died of COVID-19 and 29 million have been diagnosed with the virus. The resulting shutdowns have roiled the U.S. economy, with roughly four in 10 Americans saying they’re still feeling the financial impact of the loss of a job or income within their household as the economic recovery remains uneven one year into the coronavirus pandemic, according to a new Associated Press-NORC Center for Public Affairs Research poll.

While no one foresaw the long road ahead, or the many ways in which they would suffer — the deaths and ruined economies, the disrupted lives and near-universal loneliness and isolation — many are now looking toward the light at the end of the tunnel thanks to vaccines developed at rapid speed. And in a first step toward resuming some normal activities, the Centers for Disease Control and Prevention announced this week that fully vaccinated Americans can gather with other vaccinated people indoors without wearing a mask or social distancing.