Democratic congressional leaders took the first step Monday toward passing a sweeping coronavirus relief bill without GOP support, as President Joe Biden heard out a much smaller plan from Republicans.

Biden and Vice President Kamala Harris met with 10 Republican senators for about two hours Monday, as Democrats decide whether to slim their aid proposal to win GOP votes or forge ahead alone. The Republican lawmakers put forward a counteroffer to Biden's $1.9 trillion rescue package on Sunday. The $618 billion plan would:

Following the Oval Office meeting, Sen. Susan Collins, R-Maine, called it "productive" and "cordial." She said "I wouldn't say that we came together on a package," but noted that the sides agreed to "follow up and talk further" about an aid plan.

Senate Majority Leader Chuck Schumer on Sunday dismissed the GOP plan as inadequate as his Democratic Party warns that failure to spend now will cause more pain in coming years. As he meets with Republicans, Biden will try to balance a professed desire to work across the aisle with his calls to act decisively to mitigate the health and economic crises. 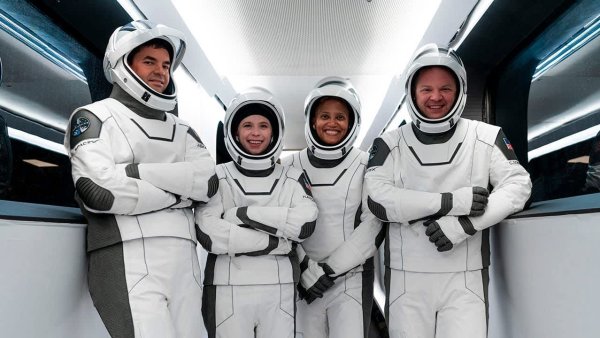 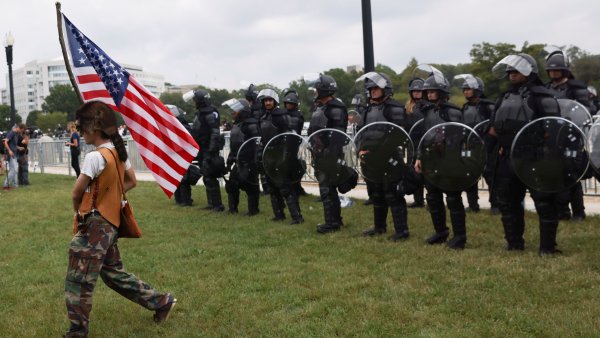 Small Crowd Gathers Near the Capitol to Protest Arrests of Jan. 6 Rioters

Warning of the damage done by delays, Democrats forged ahead with the thorny process that would allow them to approve a bill with no Republican votes in Congress. Schumer and House Speaker Nancy Pelosi, D-Calif., introduced a budget resolution, the initial step toward using the reconciliation process that requires only a majority vote to pass. The House aims to approve the measure this week.

The resolution instructs committees to draft a bevy of coronavirus aid measures included in Biden's proposal, such as $1,400 direct payments, a $400 per week federal unemployment boost through September, $350 billion in state, local and tribal relief, funds for Covid-19 vaccines and testing and rent and mortgage assistance. The instructions do not include a $15 per hour minimum wage, a Democratic priority that may not fit within restrictions governing reconciliation bills.

"We are hopeful that Republicans will work in a bipartisan manner to support assistance for their communities, but the American people cannot afford any more delays and the Congress must act to prevent more needless suffering," Schumer and Pelosi said in a statement.

Biden spoke Sunday with Schumer and Pelosi, White House press secretary Jen Psaki said in a statement announcing the president's outreach to Republicans. Biden "is grateful that Congress is prepared to begin action" on his rescue bill, she added.

Biden has left the door open to passing a bill without Republicans if he cannot reach a deal with GOP lawmakers.

"I support passing Covid relief with support from Republicans if we can get it," he told reporters Friday. "But the Covid relief has to pass, there's no ifs, ands or buts."

Democrats would need 10 Senate Republican votes to overcome a filibuster and pass a relief bill. Winning over the group that went to the White House on Monday would give Democrats enough support to get legislation through the chamber.

However, the sides face a challenge in finding a compromise between the $1.9 trillion and $618 billion price tags. One key Democrat rejected the GOP framework outright.

Incoming Senate Finance Committee Ron Wyden, D-Ore., said the plan "is far too small to provide the relief the American people need." He criticized the decision to extend the federal jobless benefit through June, saying, "We can't keep jumping from cliff to cliff every few months."

"Workers who have lost their jobs through no fault of their own shouldn't be constantly worrying that they are going to lose their income overnight. An extension of benefits for at least six months is essential," Wyden said in a statement.

The senators who met with Biden include several from the bipartisan group that crafted the framework for the $900 billion relief plan passed in December. The Republicans are:

"With your support, we believe Congress can once again craft a relief package that will provide meaningful, effective assistance to the American people and set us on a path to recovery," they wrote in their letter to Biden. "We recognize your calls for unity and want to work in good faith with your administration to meet the health, economic and societal challenges of the COVID crisis."

Their proposal would scale back Biden's in multiple ways. First, direct payment recipients would get $400 less. The plan would also start phasing checks out at $40,000 per year in income for individuals, versus $75,000 in the president's proposal. The checks would be capped at $50,000 in income in the GOP proposal.

The offer would keep the $300 weekly unemployment benefit in place through June, while Biden's would set a $400 per week supplement through September. The GOP plan also would not send any new relief to state and local governments, neglecting a Democratic priority.

The $20 billion for schools set out by Republicans compares with $170 billion for K-12 schools and higher education institutions in Biden's plan.

The push for another aid package comes as the government rushes to vaccinate Americans before more transmissible Covid variants spread widely. More than 25 million people have now received at least one vaccine dose, while at least 5.6 million have had both shots, according to the Centers for Disease Control and Prevention.

While new Covid-19 cases have slowed in the U.S., the outbreak is killing an average of more than 3,000 Americans each day.

U.S. GDP grew by 4% in the fourth quarter, but it fell by 3.5% for the full year in 2020. More than 18 million people were receiving unemployment benefits as of last month.

Despite the sluggish recovery, Republicans will have trouble bringing some colleagues to support even a slimmed down plan. Sen. Pat Toomey, R-Pa., on Monday downplayed the need for spending outside of vaccine distribution funds.

"I just don't think there's a good case for redoing this," he told CNBC.