Under normal circumstances, finding a way to earn a point at Red Bull Arena would be a decent accomplishment for a Union team that's won only one time there in 10 trips.

But considering where they are in the standings and how little excitement came from the game - except for the performance of one player - you'll have to forgive Philly fans for not getting fired up about Sunday's nationally televised scoreless draw vs. the New York Red Bulls.

Here's a closer look at the game - and more - in this week's Inside Doop. 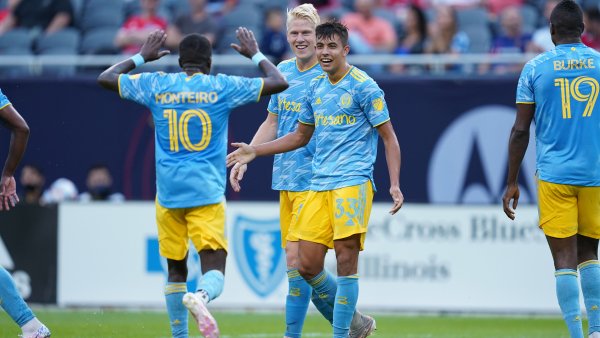 Three thoughts about Sunday's game
1. What more can you say about Andre Blake at this point? The star goalkeeper has been the team's brightest star over the past two years, winning the Union points in games in which they had no business winning points. Sunday's game was the latest example as Blake made eight sparkling saves, including seven in the first half, to keep the Red Bulls off the board. And Union fans can exhale after the goalie went down with what looked like a neck injury before popping back up. This was easily his best game since returning from his Gold Cup injury and a good sign heading into the offseason next month.

2. The team's center back pairing has been in flux for much of the season, and on Sunday, Richie Marquez made his first start since April, alongside rookie Jack Elliott. Perhaps the most interesting part of this pairing is that Elliott, a fourth-round pick in the 2017 draft, has been the best and most reliable center back of a group that also includes veteran Oguchi Onyewu and Joshua Yaro, the No. 2 overall pick in the 2016 draft. And Marquez, a former late-round pick himself who emerged as one of the team's top young players in 2015 and 2016, had fallen off the map until this weekend. So the biggest question now is whether Elliott continues his upward trajectory - the rookie put in another strong shift vs. the Red Bulls - or if he plummets on the depth chart like Marquez, who likely didn't do enough to win back a starting role when everyone is healthy and available.

3. There was nothing doing offensively for the Union, who have generated very little in that department in road games this season. Against the Red Bulls, they had only two shots on target, missed a lot of passes, won only two corner kicks, and had less than 40 percent of the possession. The problems? Ilsinho getting yanked after playing only the first 45 minutes and Roland Alberg not getting on the field is another example of their inconsistency at playmaker. And over on the wings, Chris Pontius remains stuck on zero goals this season, Fafa Picault was absent with an illness, and Fabian Herbers' injury absence continues to be a noticeable void. Aside from striker CJ Sapong, who's enjoying a career year, which offensive player can you really count on going into 2018?

Three thoughts for the week ahead
1. What will the reception be like from Union fans when they return home to face the Chicago Fire on Saturday (7 p.m., TCN) for their first game at Talen Energy Stadium in nearly a month? Although not yet officially mathematically eliminated from the playoff race with five games left, the Union have less than a one-percent chance to get in thanks to a six-game winless streak. And although there have been a smattering of boos for head coach Jim Curtin in recent games, it seems apathy has set in for most of the fanbase as they come to terms with another lost season.

2. The biggest noise from the crowd may be for Bastian Schweinsteiger if he takes the field for Chicago; the German legend has been nursing an injury. But the Fire, in third place in the East and coming off a 3-0 shellacking of D.C. United, still have plenty of other weapons if he can't go. And, in many ways, their rise from last place in the East the last two seasons to a legitimate MLS contender shows how quickly teams can turn things around - if they make shrewd moves and spend money in the right places. Can the Union learn from that this offseason?

3. Who will start at center back with Onyewu poised to return from a suspension and Yaro potentially back from a minor knee injury? Curtin has said he doesn't want to just throw young guys in there but it might be nice to use a few games - especially against high-octane offensive teams like Chicago, Atlanta and Seattle - to try to figure out who would be a better option between Yaro or Marquez to play beside Elliott next year. Or maybe Onyewu showed he has enough left in the tank to return to a starting role next season? Or will they have to bring in someone else? There will, for sure, be some interesting offseason decisions at center back.

Stat of the week
The Union have won just one game and earned only nine road points through 15 contests this year (with two road games left). Aside from their 2010 expansion team, when they earned seven points in 15 road games, their lowest road point total for a season is 13 (2012 and 2015).

Quote of the week
"These are results now, on the road in recent weeks, where if we did our work early on in the season, they would be positive results. But right now, as we chase from behind, it's difficult."

Player of the week
Blake is the easy choice here. The final score could have been ugly without him.