Houston coach Kelvin Sampson wasn't about to apologize for an ugly win over Rutgers on Sunday night.

After all, it sure beats feeling good about a pretty loss.

After scrapping for every loose ball and rebound just to stay in the game, the second-seeded Cougars got a clutch three-point play from freshman Tramon Mark with 24 seconds left, then watched as Ron Harper Jr.'s tying 3-point try bounce off the rim at the buzzer to escape with a 63-60 victory and earn another trip to the Sweet 16.

“We have some of these occasionally. We have a lot of pretty ones, too,” Sampson said. “On nights we shoot well, we look good, but there's not a lot of teams that can play as poorly as we did and still win, and we've done that a lot.”

Quentin Grimes led the Cougars' comeback with 22 points, and DeJon Jarreau overcame a severely bruised hip to score 17 with a key bucket down the stretch, as Houston (26-3) marched on to play No. 11 seed Syracuse next weekend.

“I can't even tell you how bad we wanted it," Jarreau said. “Just will to win, will not to go home.” 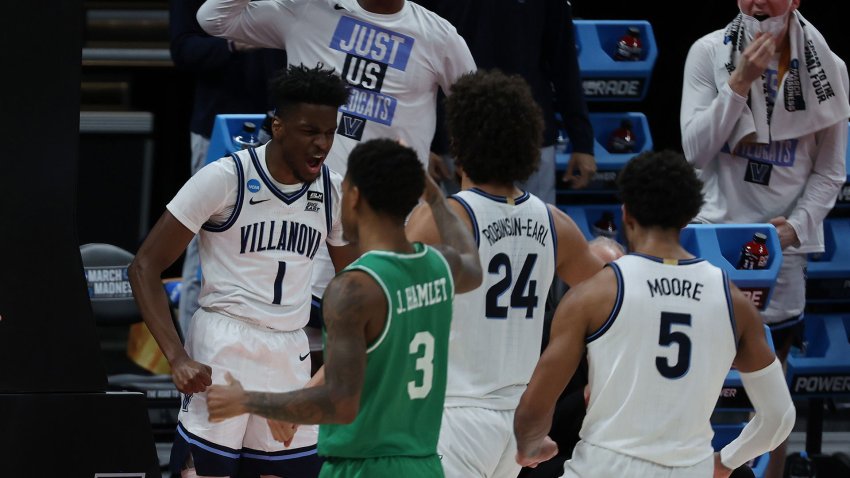 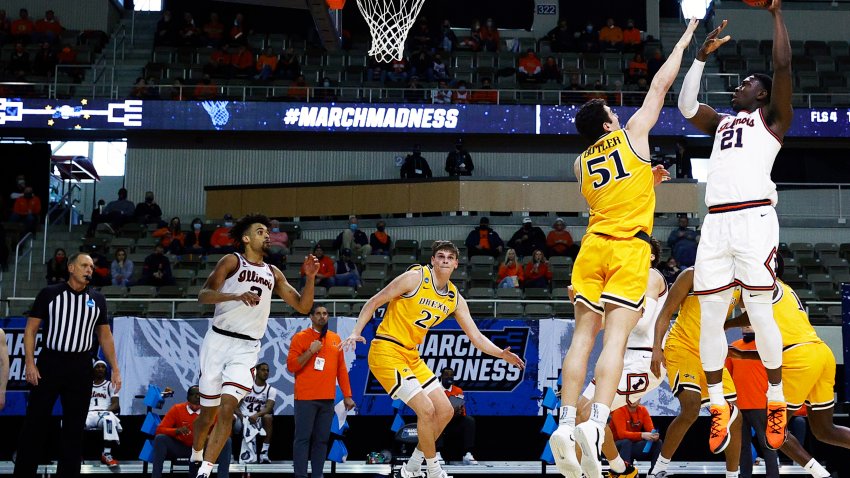 The 10th-seeded Scarlet Knights (16-12) still had a chance after Mark's free throws, but Geo Baker turned the ball over and Marcus Sasser made two more foul shots to extend Houston's lead. Rutgers rushed back up the floor and Harper let a good look fly from the wing, but it bounced off the rim as the final seconds ticked off.

Baker, who finished with 14 points, pulled his jersey up over his face to hide his tears as he walked off the court. Montez Mathis added 10 points for the Scarlet Knights, who still have not reached the Sweet 16 since 1976.

“We played our hearts out. This team made history,” said coach Steve Pikiell, who also had to tell his team afterward that beloved Rutgers announcer Joe Boylan had died earlier Sunday following complications from a stroke suffered last week.

“They got through a two-year journey, COVID, never missing a day, never having a pause,” Pikiell continued. “All of those obstacles they had to fight through, they now become the standard for what we want to be at Rutgers.”

The difference in program pedigrees was evident by the way they hit the floor of Lucas Oil Stadium.

The Cougars had the swagger of a school that knew it belonged: five trips to the Final Four, the halcyon days of Guy V. Lewis and their rebirth Sampson, and the Phi Slama Jama teams of the Dream, the Glide and the Silent Assassin.

The Scarlet Knights bounced out moments later as if riding pogo sticks, boundless joy and energy borne of the fact that they had already done something Rutgers hadn't accomplished in 38 years: win a single NCAA tourney game.

Their showdown for the Sweet 16 was physical enough it made sense to play it in a football stadium.

Caleb McConnel hit the deck a half-dozen times for Rutgers. Houston big man Reggie Chaney was ready to throw down with anybody wearing red. By the time the first half ended, and the Scarlet Knights had forged a 30-27 lead, Rutgers and Houston each had two regulars mired in foul trouble and it seemed that everyone was carrying a bruise.

“They were being physical,” Sampson said, “and Rutgers is just so big.”

When Chaney took a seat with his fourth foul with 15:45 left, the Scarlet Knights went on the attack. Paul Mulcahy and Jacob Young rattled in 3-pointers. Baker hit a jumper and a 3 of his own. And by the time there was 10 minutes to go, the Scarlet Knights had meticulously built a 50-40 lead.

Even worse for the Cougars? The sight of Jarreau, the body blows having taken their toll, clutching his hip as he headed to the bench. Trainers spent several minutes working on the do-everything guard before he returned to the game.

Good thing he made it back to the floor.

The Cougars were slowly chipping away at their deficit when Jarreau hit a 3-pointer to get them within 58-53 with just over 4 minutes left. Grimes added a 3-pointer of his own a couple minutes later, and both of them hit free throws, before Mark's soaring three-point play gave Houston the lead and set up the frantic finish.

“Coach Sampson did a great job of building this culture we have here, just with toughness, with will to find a way to win,” Jarreau said. “Everything leading up to this point from June — the hard practices, the film sessions, all the sprints — that's what we do it for. We do it for march. I'm happy it's paying off.”

Rutgers did everything right until the final 10 minutes, when the magnitude of the moment appeared to catch up with a team that hadn't been in such a high-profile situation in decades. The Scarlet Knights had just 13 turnovers but two of them came in the decisive final minute.

Houston has won nine straight since losing to Wichita State on Feb. 18, and now heads back to the Sweet 16 for the second consecutive tournament. The Cougars also gave Sampson his 665th win, moving him past John Wooden on the career list.

The Cougars play the Orange for a spot in the Elite Eight. They lost their only meeting with Syracuse on Dec. 11, 1982.