Takeaways After Phillies Falter Again With Aaron Nola on the Mound

With their season already on life support, the Phillies inched a little closer to the grave in a dispiriting 7-2 loss to the Atlanta Braves on Monday night.

Aaron Nola lost for the fourth straight time, all since the team committed to giving him the ball every fifth down the stretch, and the offense was mostly overmatched by Atlanta right-hander Mike Foltynewicz. 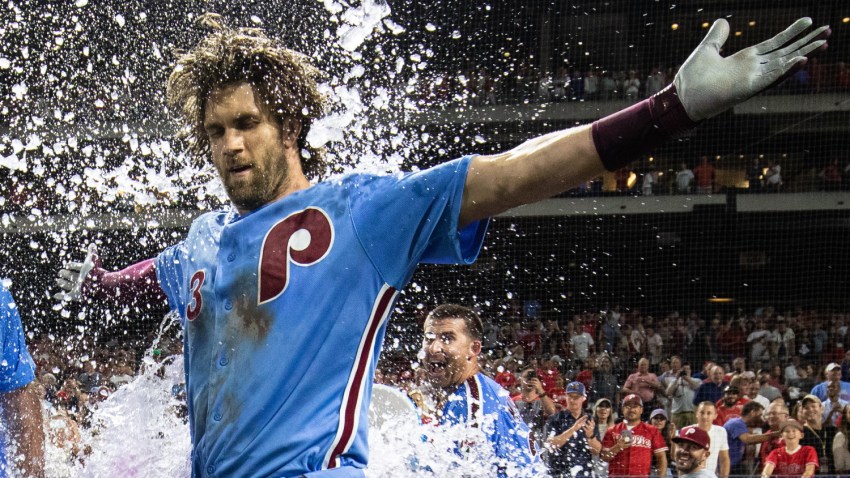 The loss dropped the Phillies to 2 ½ games out of the NL's second wild-card spot with 19 games to play.

It's extremely difficult to believe the Phillies have a run in them because their schedule is brutal over this final stretch of the season. Monday night's game was the first of seven in a nine-game stretch against the Braves, who have 90 wins and are on the cusp of a second straight NL East title.

The Phillies, 74-69, have not made the playoffs or had a winning season since 2011. They need to go at least 8-11 in their final 19 games to finish with a winning record.

But it wasn't good - certainly not what we've usually come to expect from Nola.

The right-hander was hit hard in the first two innings as he allowed six hits, including a homer and two doubles, two walks and four runs over that span.

He rebounded nicely and put up four scoreless innings to take his team through the sixth inning, but the damage was insurmountable given the way Atlanta's Foltynewicz shut down the lifeless Phillies bats.

Nola has struggled in his last two outings. He lasted just four innings and gave up five hits and five runs in his previous start against Cincinnati.

Back on August 20, the Phillies committed to pitching Nola every fifth day the remainder of the season.

At the time, manager Gabe Kapler said, "I think he's built for this. And, quite frankly, we're in a pennant race and he's far and away our best and most dependable pitcher so it's time to take that sort of liberty."

Nola is 0-4 in four starts since Kapler made those remarks. Two of the losses were not his fault as the offense did not support him with runs. But Nola has not been his best in the last two. On a five-day rotation, he would next pitch against Boston on Saturday night. Might the Phillies re-think their strategy, give Nola an extra day and move him back to Sunday? After the game, Kapler said that was not the plan. He indicated that Nola would stay on his fifth day and pitch Saturday.

Nick Pivetta's difficult season continued. He was brought in to keep a three-run game close in the seventh, but gave up a leadoff walk, a one-out single and a three-run homer to Josh Donaldson as the Braves pulled away.

Foltynewicz held the Phillies to three hits and a run over seven innings. One of the hits was an infield hit.

Corey Dickerson homered against Foltynewicz with one out in the fifth inning. That was the Phillies' first hit of the game as Foltynewicz retired the first 13 hitters he faced.

This will happen when your ace gets knocked around early and you don't hit. Nonetheless, the Phillies looked lifeless for most of the night. They had just three hits in the first eight innings. A leadoff homer by Cesar Hernandez and a base hit by J.T. Realmuto stirred a little energy in the ninth, but it was much too little too late.