Toward the tail end of his introductory virtual press conference with local reporters, new Eagles receiver DeVonta Smith was asked about his favorite route to run.

His answer was short and sweet.

That’s an answer that will make Eagles head coach Nick Sirianni happy. Because Smith is going to be asked to do a lot of different things in his offense. He’ll run every route and play every position at times. At least that’s what Sirianni said on Thursday night, shortly after the Eagles traded up to No. 10 to draft the Heisman Trophy winner out of Alabama. 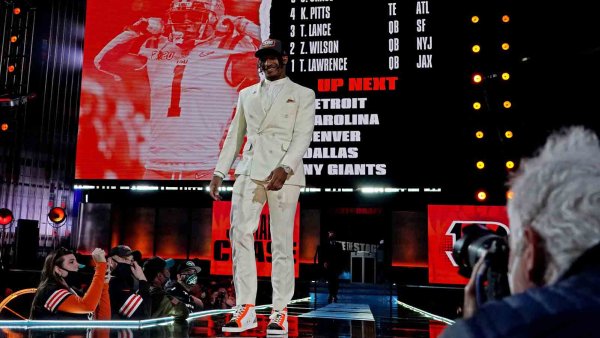 2021 NFL Draft Suits: Most Memorable Outfits From First Round 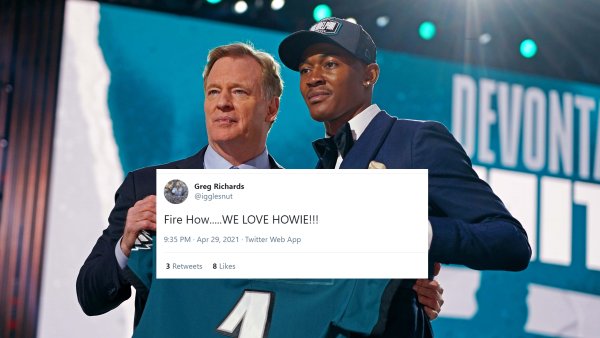 The excitable Eagles coach, who also happens to be a former receiver and former receivers coach, gave a lengthy answer when asked how Smith will fit into the offense he’s bringing to Philly.

Let’s look at it in chunks:

“Yeah, as far as just where he fits in the offense I think if you look at any offense that I've been a part of for the past eight years, we move our guys around all over the place. So to say he plays ‘F’ in the slot, to say he plays the ‘X’, he plays the ‘Z’, yes, he'll play all those things because we move our guys around, how we want to get them the ball.”

This is something we saw to a certain extent with Doug Pederson’s offense too, moving receivers to different positions. It’ll be interesting to see if the Eagles bring Smith along slowly, teaching him one receiver position at a time or if they throw him into the deep end. They raved about his intelligence on Thursday night.

At Alabama, Smith played the X position, though he doesn’t have the prototypical size to play that position in the NFL. But Sirianni mentioned last week that he’s had several different sized receivers play the X for him before.

“What I saw in DeVonta was just a guy who can consistently win 1-on-1. It's a little different with how he does it. He does it with speed, quickness. He does it at the top of the route, beginning of the route, off the line of scrimmage. But I consistently saw him win one-on-one vs. some of those top corners in the SEC, and when you have a guy like that in your offense that can do that, it makes everybody else around him better.”

Smith’s ability to win those 1-on-1 matchups is special and it’s a trait that made the Eagles feel comfortable overlooking his outlier lack of size for his position and for a first-round draft pick. Smith is just 166 pounds but handles press coverage very well; he’s great off the line.

“He's a long strider and fast, as we've all seen with his tape. To be able to -- we throw a lot of crossing routes in our offense and you can just see some of the guys in our past that we've had that can run away from the defense. He has that part of his game as well.

“He has very good YAC ability, easy touches to get the ball out of the quarterback's hands and into his hands, and he just showed that in a very competitive league obviously.”

Watching some past videos of Sirianni breaking down his offensive scheme and philosophy YAC (yards after catch) comes up a ton. He always emphasizes that explosive plays come from a lot of areas, not just deep balls. So we can probably expect to see a lot of shallow crossers and natural rub routes from the offense that will allow the receivers to get the ball in their hands and then make something happen. We might also see the Eagles utilize pre-snap motion and even WR screens with Smith. Over 51% of his yards came after the catch in 2020, according to The Athletic.

“The major requirement of the position is you catch the football, right? That's the major requirement. You got to be able to do that, and he does that exceptionally well. Not only when bodies are around him, when the ball is -- no matter where the ball is, seems like he has a knack to go get it even when bodies are around him.”

Smith was one of the most sure-handed receivers in college football in 2020, dropping just three passes out of 155 targets, according to ProFootballFocus. And despite his underwhelming weight, Smith fights for the ball. PFF gave him a 90+ rating on contested catches over the last two seasons; that’s almost identical to Ja’Marr Chase’s grade on contested catches and Chase outweighs him by 35 pounds.

For now, it’s unclear what the Eagles’ starting group of receivers will look like in 2021, but it’s obvious that Smith is going to have a major role. Based on the answers we heard on Thursday night, it’ll be a varied role, but he’s going to play a ton and will be an integral part of Sirianni’s offense.

There was some real excitement from the NovaCare Complex after landing Smith.

“Super impressed with a lot of things that he can do,” Sirianni said, “and we see a lot of different ways that he can fit our offense.”