The Good, the Bad and the Ugly: The Eagles' Best and Worst Free Agents of All-Time

So it’s a perfect time to look back at some of the best and worst free agent signings in Eagles history.

Let’s do it by position:

The Eagles obviously had Foles for the beginning of his career as a draft pick but welcomed him back to Philadelphia as a backup in 2017. Foles signed a two-year, $11 million deal with $7 million guaranteed, which seemed like a lot of money at the time for a backup, who nearly thought about retiring not long before that. But obviously this move worked out well and Foles went on to be the MVP in Super Bowl LII.

The Eagles haven’t had any major failures in free agency at the QB position but Young became infamous when he spoke two words: “Dream Team.” It’s unfortunate that the words came out of his mouth but Young became synonymous with the 2011 spending spree that brought the Eagles Nnamdi Asomugha, Dominique Rodgers-Cromartie and Jason Babin. Young started three games for the Eagles in 2011, going 1-2 with 4 TDs and 9 INTs and never played another game in the NFL. 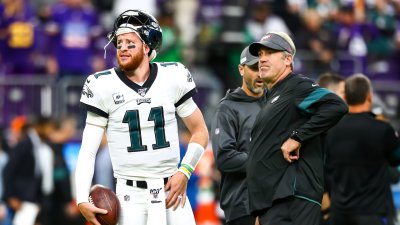 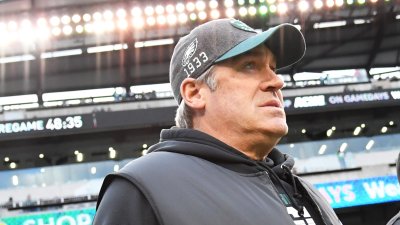 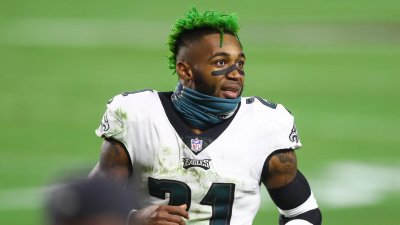 After starting his career off with three straight Pro Bowls with the 49ers, Watters signed a three-year deal with the Eagles in 1995. If you can look past “For who? For What?” you’ll see an impressive three-year stretch for Watters in an Eagles uniform. He averaged over 1,200 yards and over 10 rushing touchdowns per season in his time with the Birds. He also added over 1,300 receiving yards and was a Pro Bowler in two of his three seasons in Philadelphia.

This one was a disaster. The Eagles lost out on Frank Gore when he pulled out of an agreement and instead signed Murray to a five-year, $42 million contract in 2015 as Murray was coming off an Offensive Player of the Year season. But he never fit in Philly and never seemed to even like playing here. He was in a backfield with Ryan Mathews and finished with just 702 rushing yards and 6 touchdowns on the season. Chip Kelly was fired during the 2015 season and Howie Roseman traded Murray away in March of 2016. Murray went on to have a 1,200-yard season with the Titans the year after leaving the Eagles.

Smith just didn’t have it anymore by the time he got to the Eagles. Smith (the one from the Giants) had a microfracture surgery in 2010 and by the time he got to the Eagles in 2011, it was clear he wasn’t the same player. He joined the Eagles on a one-year, $2 million deal but there were high hopes. After all, Smith had a 1,200-yard season and was a Pro Bowler in 2009. But he played nine disappointing games with the Eagles before he was put on IR with a bone bruise, ending his time in Philly. He retired after the 2012 season.

The Eagles initially signed Lewis as a UDFA back in 1997 but we’re not counting UDFAs, so instead we’re talking about when Lewis was released by the Rams during the 1999 season and the Eagles signed him again. In his first full season back with the Eagles in 2000, Lewis caught 69 passes for 735 yards and 3 touchdowns. He followed that up with back-to-back 40+ catch seasons.

The Eagles signed Casey to a three-year, $14.6 million contract in 2013 and had high hopes for him in Chip Kelly’s offense. The former Texan showed plenty of promise but in his two years with the Eagles caught just 6 passes for 90 yards and 2 touchdowns. They paid a lot for minimal production.

Runyan began his career as a 4th-round pick with the Oilers and moved with the team to Tennessee in 1997. But after four years with that franchise, he signed a six-year, $30 million deal with the Eagles. It was a lucrative contract at the time but Runyan was worth it. He held down the right tackle position in Philly for nearly a decade, making 144 starts and getting to the Pro Bowl in 2002.

The Eagles signed Demetrius Bell from the Bills and they ended up with Demetress. In 2012, the Eagles signed Bell to a five-year, $35 million contract, he changed his name and lasted just one season. The idea was to have Bell replace Jason Peters, who tore his Achilles, but Bell was awful. He was supposed to be the starter until he lost his job to King Dunlap. This ended up being Bell’s final season in the NFL.

Perhaps some folks thought the Eagles overpaid for Brooks when they signed him to a five-year, $40 million contract in 2016. They didn’t. The Eagles saw the potential in Brooks and he made the most of it, becoming a three-time Pro Bowler and one of the greatest interior offensive linemen in Eagles history. He beats out Evan Mathis, another great iOL signing, for this spot.

The older brother of Shawn got a six-year, $38 million contract in 2009 and was awful. Andrews made it through two games before he was benched in favor of Max Jean-Gilles. The Eagles ended up trading Andrews the next season to the Seahawks. He played one year there and one year with the Giants before his career was over.

Fuller was late in his career when he signed with the Eagles in 1994 but he still played at an incredibly high level. He made the Pro Bowl in all three of his seasons in Philly from 1994-96 and piled up 35 1/2 sacks. Despite playing just three seasons in Philly, Fuller is 10th on the franchise’s all-time leaderboard in sacks.

After Reggie White walked as a free agent, the Eagles signed Harris, who had 17 sacks the year before with the 49ers and 19 1/2 jus several years before that in Green Bay. But Harris’s one year in Philly was a disaster. He played four games and registered just 6 tackles and not a single sack.

The Eagles haven’t really had many great defensive tackle signings but after some digging, we came up with Hall, who joined the team in 1995. He played in just two games in that first season but started 31 over the next two seasons and had 12 1/2 sacks in 1996-97.

The Eagles signed Jackson to a three-year, $30 million contract in 2019 but Jackson lasted just one game before going down with a Lisfranc injury. In 2020, he was a backup behind Javon Hargrave and after a quick start began to slow down some. To be honest, the Eagles haven’t had many great or horrible DT signings. But this Jackson one was disappointing. The Eagles are expected to cut him soon.

This was a close call between Bradham or Carlos Emmons, but we’ll give a nod to the Super Bowl champion. Bradham was one of several members of the 2014 Bills the Eagles brought in under Jim Schwartz in 2016, but Bradham was the best of the bunch. He played four seasons in Philly and was a key starter on those playoff teams under Doug Pederson.

This one isn’t the player’s fault but it really illustrated a disconnect between the Eagles’ front office and its coaching staff. The Eagles gave Fort a three-year, $5.4 million deal with $1.9 million guaranteed in 2019 and then he couldn’t get on the field. Fort lasted just one month into the 2019 season without playing a defensive snap when the Eagles cut him. To make matters worse, Fort went to the Ravens, became a starter and got a new deal with bigger money.

After spending his first four years with the Dolphins, Vincent signed with the Eagles in 1996 and went on to have an impressive eight-year run in Philadelphia, making five Pro Bowls and one All-Pro team. Asante Samuel gets an honorable mention here, but Vincent deserves the top spot.

Many people will probably argue that Nnamdi Asomugha deserves this top spot but I disagree. Obviously, Asomugha was a bad signing but I’d argue Maxwell was even worse. He got a six-year, $63 million deal with the Eagles and was just awful. The Eagles quickly traded him away in 2016 as a part of the move up to eventually get Carson Wentz.

If you remember, Jenkins was not the most popular route back in 2014, when many fans preferred Jairus Byrd. But the Eagles signed Jenkins to a three-year deal worth just over $16 million and he went on to be arguably the best free agent signing in franchise history. Jenkins spent six years in Philly, never missed a game, made three Pro Bowl teams and was the unquestioned leader on the Super Bowl defense.

We had other options here like Erik McMillan or Patrick Chung, but I’ll give the nod to Bishop, who was clearly at the end of his career by the time he got to Philly. Bishop was supposed to form a dynamic duo with Brian Dawkins after an injury to Damon Moore, but it didn’t go very well. The lasting image of Bishop will be of him chasing Joe Jurevicius on the 71-yard touchdown in the 2002 NFC Championship Game.

Landeta was already 14 years into his career when the Eagles signed him in 1999 but he went on to play five total years in Philly. He’s fifth in Eagles history in gross and net punting average.

When the Eagles signed Boniol, he was the most accurate kicker in NFL history but he was a disaster with the Eagles in the late 90s. In his two seasons with the Birds, he made just 69.2% of his kicks. And it wasn’t like he was just missing really long ones. He was 7 of 20 from 40-49 yards.