The Eagles overcame the nasty weather, injuries and a dismal start to beat the Giants 23 to 17 in an overtime thriller Monday night.

UPDATE: They did it! The Eagles overcame their dismal start to beat the Giants 23 to 17 in overtime!

10:52 p.m.: Carson Wentz threw was should have been a 29-yard touchdown pass but Greg Ward just dropped it. The DB had tight coverage but didn’t tip it.

And then Jake Elliott missed a 47-yard field goal.

They finally got something going and got a touchdown. Boston Scott picked up 21 yards on four carries with a touchdown and the Eagles went 58 yards for the score. Miles Sanders went to the locker room during that drive, so Scott took over.

9:42 p.m.: I don’t know anymore. Darius Slayton just split Ronald Darby on 3rd-and-8 for a 55-yard touchdown pass before the half.

This is a new rock bottom.

This is beyond embarrassing.

The Eagles, in a fight to make the playoffs, are getting smoked by a two-win team that hasn’t won a game since September.

The Eagles got booed off the field at the end of the first half and they deserve it. In fact, they deserve to come back out of the locker room to an empty stadium. No one should have to sit here and watch this crap.

9:35 p.m.: Lane Johnson (ankle) is questionable to return. His injury looked nasty and he was carted inside. Tough to watch.

9:15 p.m.: The Giants just kicked a 34-yarder of their own. The big play on that drive was a 42-yarder to Darius Slayton, who again beat Darby. Darby is having a tough night.

9:05 p.m.: The Eagles just kicked a 34-yard field goal, but Alshon Jeffery left the game with a foot injury. The Eagles are down to just two healthy receivers.

8:57 p.m.: The Giants just converted on a 3rd-and-13 on the first play of the second quarter and gave up a 35-yard touchdown pass. Ronald Darby failed to tackle Darius Slayton, who slipped away and ran into the end zone. It would have been a stop.

A lot of boos here at the Linc and the Eagles deserved every one of them.

Early in the second: Giants 7, Eagles 0

8:47 p.m.: It seemed like the Eagles were about to get something going, alas, they didn’t. Carson Wentz’s third down throw was at Alshon’s feet.

8:26 p.m.: Well, Eli’s first throw was a dud. Behind Saquon Barkley. This game might be hard to watch.

8:22 p.m.: Gross first drive from the Eagles’ offense. Jason Peters got called for a false start (I know, right?) and then Carson Wentz took a sack for a loss of 12 yards.

8:13 p.m.: The Giants won the toss and elected to defer. Carson Wentz and the offense up first.

7:03 p.m.: It looks like the heaviest rain has moved out but it’s still raining here at the Linc as we get close to game time.

6:45 p.m.: The Eagles are without four starters tonight. Here’s the complete list of inactives:

6:06 p.m.: It’s still raining pretty hard here at the Linc, but the tarp has been removed from the field for warmups.

Miles Sanders and the running backs, along with the kickers are the first players on the field.

5:14 p.m.: It’s coming down really hard. The tarp is down and will be there for a while longer.

4:06 p.m.: I have arrived to Lincoln Financial Field and it’s raining pretty hard. Not many tailgaters in the lots and I can’t blame them. It’s pouring and a Monday afternoon.

The forecast has called for rain all week, so it’s not like this is a surprise. In fact, Doug Pederson was even asked on Saturday about how weather affects his play calling.

“With play calls, it’s really determined on really when we get to the game and see how much it's raining or the wind, all that,” he said. “You really just go in the whole week and prepare as normal.

“I think for me, if I'm preparing the team I do want them to understand that there could be some weather coming in here, so obviously cleats, the grass, all of that. I want them to understand that we can make those adjustments now and prepare for that now. But as far as the play calls, you really don't know until you see exactly in-game how bad it's raining or the wind at that time.”

In the past, Carson Wentz has thrown wet footballs during the week before games where rain is expected. He said it helps.

3:50 p.m.: The Eagles will be in black uniforms tonight and a bunch of them will have personalized cleats for the NFL’s “My cause, my cleats” campaign.

Here’s a look at all of them:

We have waited a long time for tonight, but the Eagles will host Eli Manning and the Giants tonight at the Linc. Here are five matchups to watch.

If you’re heading to the game, bring your rain gear. 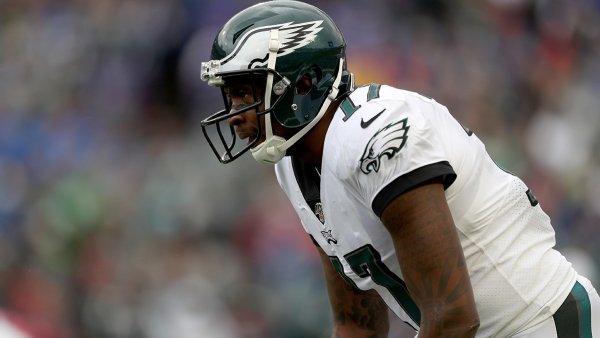 Eagles Mailbag: What Should the Eagles Do at Wide Receiver Next Year? 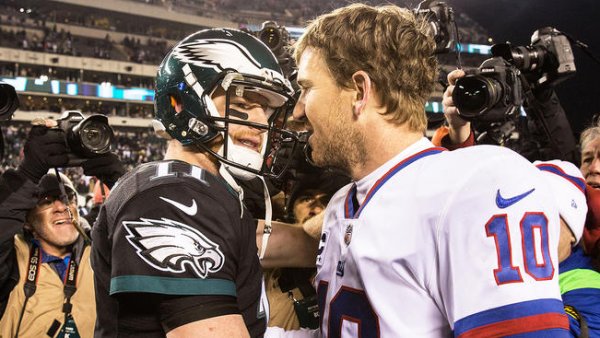 Eagles or Giants: Experts Weigh in