Daryl Worley Was Last to Know He Was Heading Home

Sometimes Paradise doesn't have great cell service. That's one of the reasons it's paradise.

So back on March 9, when the Panthers traded Daryl Worley to the Eagles, Worley was one of the last to find out. See, when the trade went down, the 23-year-old cornerback was on vacation in the Bahamas. More specifically, he was on a short boat cruise over crystal blue water as a wave of messages flooded his phone.

While his family and friends in his hometown were celebrating his return back to Philadelphia, Worley was blissfully unaware. 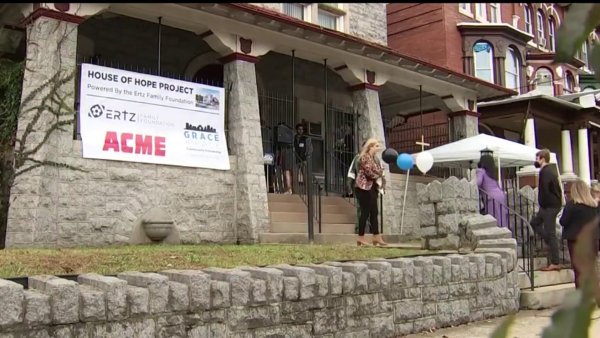 Until the boat got back to shore.

"My phone just lit up," the cornerback said on Monday afternoon at his introductory press conference in Philly. "And I read the text messages, and I thought people were joking."

They weren't. The Eagles shipped Torrey Smith and his bloated contract to Carolina and in return, the Panthers were willing to give up Worley, whom they drafted in the third round out of West Virginia in 2016. Worley was inundated with missed calls and text messages, many from loved ones in Philadelphia, still his home in the offseason. But his first phone call was to his father, Kenneth, who was "very emotional about the situation."

Worley's parents still live in the same North Philadelphia neighborhood - near Temple University Hospital - where he was raised and where he grew up as an Eagles fan.

Playing football as a youngster and then at Penn Charter, Worley was a two-way player; a safety on defense and a wide receiver on offense. So it shouldn't be too big of a shock that he said his favorite Eagles player of all time is Terrell Owens. Worley was 15 days shy of his 10th birthday when he watched Owens play in - and nearly help the Eagles win - Super Bowl XXXIX. Owens and Worley stand in stark juxtaposition in Eagles history. While Owens was overly outspoken, Worley's high school coach described his former player as a really quiet guy (see story).

Still, it shouldn't be too difficult for Worley to fit into the Eagles' locker room. He'll join several of his college teammates in Philly. He was in the same defensive backfield as Rasul Douglas for two seasons at West Virginia. He considers Wendell Smallwood one of his closest friends. And he was freshman roommates with Shelton Gibson; Worley claims he was the cleaner of the two.

Sure, there might be some hurdles for Worley as he plays in Philly, but he understands that. He's prepared to be pulled in several different directions.

"Coming back home to things like this, there's going to be a lot more asked of me, on the field and off the field," he said, "but with that being said, I have a great support group around me and I know I have a great group of guys so anything I may need or ask for I know they'll be able to help me with it."

Worley isn't sure what his role will be with the Eagles and he probably won't know (at the earliest) until offseason workouts begin in April. Until then, he's going to do as much film study as possible as he settles back into life where he grew up.

Philly isn't exactly paradise - it's about to snow in March - but Worley is home, he gets to play for the team he rooted for as a kid. And besides, cellphones can be turned off.