‘Only a Matter of Time' Till Eagles' Defense Woke Up

There was no big strategy shift. They didn't scrap the scheme. There were no significant adjustments. Nobody got benched. 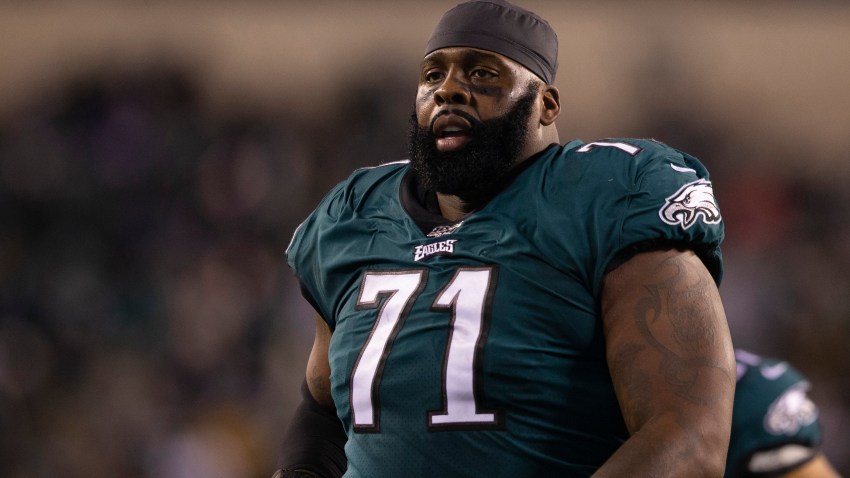 They just calmed down and began playing Eagles football.

Wow, did they ever.

The Eagles' defense looked lost early Sunday afternoon. Once they got their act together, it was over.

No panic," Ronald Darby said. "We knew we were going to get it together. That's one thing that makes us as good as we are. We never panic, we never break down, we never point the finger. Everybody is going to f--k up, nobody's perfect, but it's a four-quarter game. So yeah, you could beat us one quarter, two quarters, even three quarters. At the end of the day, you gotta play four quarters.

As the Eagles were figuring things out defensively, the offense was also waking up after a slow start.

The combination quickly swung the momentum of the game and propelled the Eagles through a 27-minute stretch in which they outgained the Redskins 304-30 and outscored them 25-0.

We feel like as a defense it's our job to set the tone, and we just did some uncharacteristic things early on which created big plays for them," Rodney McLeod said after the Eagles' 32-29 win in the season opener at the Linc. "Once we got back to playing like ourselves, it's night and day. We knew it was only a matter of time until we started playing like ourselves. That's one thing I like about this team. We don't get down on each other but we lift each other up, keep pushing and know that at the end of the day we're going to come away with a victory some way.

A few notes on the defensive performance:

Eight of the Redskins' 10-longest plays came in the first half.

The Redskins ran the ball 13 times for 28 yards, their fifth-fewest rushing yards in 170 all-time Eagles-Redskins games. In the second half they had minus-3 rushing yards.

The Redskins were 5-for-8 on 3rd down in the first half and 0-for-5 in the second half.

Everybody wants to start fast but the reality is if you have a slow start - which you sometimes will - how do you respond to it?" Malcolm Jenkins said. "And how comfortable are you with starting slow? This is a confidence bunch and at no point do we feel like we're out of it. Just one play at a time, claw our way back into it.

These sort of things happen on opening day. You see it a lot.

Teams are still trying to figure out exactly who they are. There are lots of new players, new coaches. Things don't always go as planned.

So you just keep fighting until you figure it all out.

Four years ago, the Eagles fell behind the Jaguars 17-0 in the opener and outscored Jacksonville 34-0 in the second half.

This wasn't quite so dramatic, but it was close.

It was uncanny how both the Eagles offense and defense got off to such a terrible start, but both turned things at the exact same time.

It's a team game," Jenkins said. "When we started getting 3-and-outs, we started to see their defense get tired, especially when we were running the ball, and (we) were scoring quick. When we click as a team it's really hard to beat us.

Despite doing nothing in the second half until the meaningless final drive, Case Keenum still threw for a career-high 380 yards and three touchcowns.

That's the eighth-most passing yards ever by an opposing quarterback in Philadelphia.

He's only the sixth QB ever to throw for 380 yards with 3 or more TDs and no interceptions against the Eagles.

Matt Ryan and the Falcons are up next.

We know we've got to play better, especially next week on the road," McLeod said. "We got past this game, but we did not play up to the standard we're used to.

Against the Redskins, you can come back from 17-0 down.

Against most teams? No way.

It's a fun story. Big dramatic comeback on opening day in front of the home crowd against a division opponent.

But the reality is the Eagles have to play better early because you can't keep getting away with starts like this.