The Eagles began their second round of OTAs on Tuesday under the beaming sun, in near-80 degree temperatures. That’s a departure from the first day of rookie camp and the first day of last week’s OTAs, which both brought rain.

So without the confinements of the practice bubble and without a slick football, we got a chance to see the 2016 Eagles in desirable conditions Tuesday.

Here are 10 observations from Tuesday’s practice: 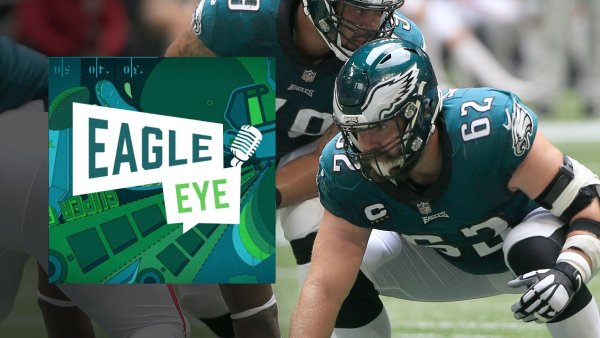 How Good Can the Eagles Offensive Line Be? | Eagle Eye Podcast

1. Overall, a pretty sloppy day for the defense. As soon as the team portion of the practice began, Sam Bradford got the defensive line to jump about three times in the first several plays of practice. Late in the practice, defensive coordinator Jim Schwartz had enough and ripped into a second-year defensive back.

During his nearly 30-minute press conference after practice, Schwartz was asked about his past experience grooming a first-round quarterback (Matthew Stafford), but said he doesn’t have much time to worry about Carson Wentz.

“We’ve got enough worries on defense right now,” he said.

2. If you’re looking for a bright spot on defense, we’ll offer up rookie defensive back Jalen Mills. On Tuesday, Mills got a chance to work against the first-team offense in the Nickel package. When Mills came on the field, Ron Brooks moved inside, while Leodis McKelvin remained outside.

Mills made the defensive play of the day, when he got in between Jordan Matthews and a deep sideline pass.

“He’s been impressive so far,” Schwartz said of the seventh-rounder Mills. “But we haven’t even really started yet, to tell you the truth.”

Schwartz said the team wanted to see how Mills would look going against veterans; before Tuesday, he had mostly been going against rookies.

“We don’t have a depth chart right now,” Schwartz cautioned.

While those three worked with the first team on Tuesday, there could be different players there Wednesday. And Nolan Carroll, who’s still recovering, isn’t yet able to do team drills.

3. Rueben Randle (gallbladder surgery) and Ryan Mathews (illness) both missed practice on Tuesday, which gave some other guys more reps.

The starting widouts were Nelson Agholor, Josh Huff and Jordan Matthews. When all three were on the field, Matthews was mostly in the slot. But one guy who did a lot with his reps on Tuesday was free-agent signing Chris Givens. Now, obviously, these guys are still in shorts, but Givens showed off his speed and hands. He’s making a push for the roster as the last receiver to make the team.

4. Fletcher Cox is still not with the team (see story). Last week, during the open practice, Taylor Hart worked next to Bennie Logan in his spot. Tuesday, it was free-agent pickup Mike Martin.

“I’ve been working with them,” Martin said after practice. “We’ve been switching and working both sides. But it’s a great advantage to be able to work with the first-team guys and get those reps.”

5. You’re probably wondering how Wentz looked. He again showed off his strong arm on Tuesday, while working with the threes. Overall, he probably had the best day of the quarterbacks.

He delivered a perfect 25-yard sideline pass to Givens over the shoulder. On another play, he tripped over his offensive lineman’s foot, but was still able to complete an out to Trey Burton while falling. That’s all arm strength, because he couldn’t use his legs to complete the pass.

The one thing we have seen a couple times from Wentz is this: he has a strong arm, but sometimes he has overthrown his targets. Nothing major yet, but something to keep an eye on.

6. Jordan Hicks was back at MIKE with the defense during Tuesday’s team portion of practice, which is a good sign for a team that’s relying on him heavily. Last Tuesday, he was held out with some tightness in his legs.

While Hicks has been playing the middle linebacker spot, Schwartz talked about the versatility of that group.

“All of those guys are pretty much interchangeable, and you have to be now,” Schwartz said.

He did pull one kick wide, but he still has a really good shot to make the team over Caleb Sturgis, who did a nice job filling in last season. It’s not definitely Parkey’s job yet, though. Sturgis looked good Tuesday and that’ll definitely be a competition to watch come training camp.

8. Donnie Jones is the only punter left in the building after the team cut Ryan Quigley earlier this week.

9. Burton has been moving around the field quite a bit in the early going. He’s been lining up on the line as a tight end, in the backfield as a fullback and in the slot as a receiver. It’s pretty clear that in some packages, Pederson and the offense will have a fullback of some kind.

Come training camp, when the hitting begins, Burton will really need to show he can handle that role.

10. Perhaps the most notable change in practice under Pederson, as opposed to Chip Kelly, comes in the form of pace. Under Kelly, the emphasis was on running as many plays as possible in the time allotted, which meant correcting mistakes after practice.

“His approach was to get no-huddle,” left guard Allen Barbre said of Kelly (more on Barbre). “If you stop to correct it all the time, you wouldn’t be getting a no-huddle practice.”

Under Pederson, there’s much more on-field teaching during practice. At one point on Tuesday, Pederson actually stopped the practice, taught technique and made them run it again. Under Kelly, the offense would have been five plays down the line.