For the first time, prominent Republican state senators on Wednesday put their support behind legislation in Pennsylvania to change the law to allow now-adult victims of child sexual abuse to sue the perpetrators or institutions that did not prevent it when it happened years or decades ago.

The vote, 11-3, in the Senate Judiciary Committee comes after years of damning investigations into child sexual abuse by clergy in Pennsylvania's Roman Catholic dioceses and signals that the legislation may have enough Republican support to pass the full state Senate.

Similar legislation passed the House earlier this month and Democrats — including Gov. Tom Wolf, state Attorney General Josh Shapiro and practically all of the party’s members of the Legislature — have backed the effort.

“Today’s vote brings these brave survivors the closest they have been to having their day in court,” Shapiro said in a statement. 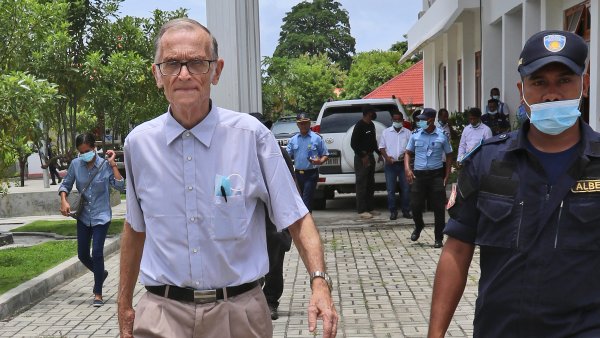 Defrocked US Priest Revered in East Timor Accused of Abuse

Many childhood victims of sexual assault lost the right to sue in Pennsylvania when they turned 18 or were young adults, depending on state law at the time.

Advocates for survivors of childhood sexual abuse say restoring the right to sue will benefit adults who, as children, were abused not only by Catholic clergy, but by public school teachers, coaches, relatives or youth group leaders, for starters.

Under the legislation, they would have two years to sue over their alleged abuse, no matter how long ago it occurred.

Brooke Rush, who says she was molested at age 11 by Johnstown pediatrician Johnnie Barto, was elated Wednesday at the news that a two-year window to sue appeared to be close at hand. If it passes, Rush would presumably be able to join a civil lawsuit against Barto’s former pediatric practice.

“I know that this is something that, for a lot of people, is a literal lifeline,” said Rush, now 45, her voice cracking with emotion. “It just never ceases to strike me to the core how much pain so many people are living through. They finally have the ability to not be silent anymore. ”

Barto is serving an effective life sentence for sexually abusing patients in his exam room. As she spoke, Rush’s phone dinged constantly, lighting up with excited messages from people she calls her “survivor sisters.”

The survivor community has spent years pushing lawmakers to act and, for years, Senate Republicans have blocked such legislation, arguing that it is unconstitutional. Roman Catholic bishops and insurers opposed it, too.

In 2019, Senate Republicans shifted to backing a constitutional amendment to restore the right to sue as more states began changing their laws on it.

On Wednesday, Senate President Pro Tempore Jake Corman, R-Centre, said that, as long as lawmakers are unified around changing the constitution, he is willing to back legislation to change the law and see what happens in court if it is challenged.

Under the bill, a legal challenge goes straight to the state Supreme Court.

Corman's office, however, would not predict whether it will pass the Senate, saying only “it will be an ongoing discussion” among Republicans in in coming days and weeks.

The Legislature had been on track to let voters in the May 18 primary election decide whether to allow a two-year window, the final step to changing the constitution. But it was derailedin early February by the revelation of a massive bureaucratic blunder, spurring more urgency.

“If you believe as strongly as I do that abuse victims have been denied a fair remedy for far too long, then we are obligated to attempt every avenue to deliver a just result," Senate Judiciary Committee Chair Lisa Baker, R-Luzerne, told the committee.

A prominent backer of the legislation, Rep. Mark Rozzi, D-Berks, praised Corman for showing the leadership in his first months as the Senate's top officer to get the bill through the committee. Corman's predecessor as president pro tempore, Joe Scarnati, had staunchly opposed the legislation.

It is the first time such legislation has gotten a real committee vote since he joined the Legislature in 2013, Rozzi said.

“I feel really, really good right now, I feel like we're in a really good spot," said Rozzi, who has told of his rape by a Roman Catholic parish priest when he was 13. “I think we have the votes in the Senate too.”