Biden Speech Takeaways: Government Is Good, and So Are Jobs

Here are some key takeaways from the president’s address

President Joe Biden on Wednesday returned to the U.S. Capitol, his home for more than three decades, and used his first address to Congress to make the case that the era of big government is back.

He said the U.S. is “on the move again” after struggling through a devastating pandemic that killed more than 570,000 Americans, disrupted the economy and shook daily life. And he pitched an expansive — and expensive — vision to rebuild the nation’s roads, bridges, water pipes and other infrastructure, bolster public education and extend a wide swath of other benefits.

Here are some key takeaways from the president’s address:

It’s perhaps no surprise for an administration that has made beating back the pandemic and getting Americans back to work the central guideposts for success.

Biden noted that the economy has gained some 1.3 million new jobs in the first few months of his administration — more than any in the first 100 days of any presidency. But he quickly pivoted to the need to pass his American Jobs Plan if the country is going to sustain momentum and get back to the historic low levels of unemployment before the pandemic.

He also aimed to frame his push for the U.S. to meet its international obligations to slow the impact of climate change as, ultimately, a jobs plan.

“For too long, we have failed to use the most important word when it comes to meeting the climate crisis,” Biden said. “Jobs. Jobs. For me, when I think about climate change, I think jobs.”

WHO TURNED THE TIDE?

Biden said “America's house was on fire” when he took office, citing the devastating COVID-19 pandemic, its damaging economic impact and the Jan. 6 insurrection at the Capitol.

“Now — after just 100 days — I can report to the nation: America is on the move again,” Biden said, adding that the U.S. is now “turning peril into possibility. Crisis into opportunity. Setback into strength.”

It’s a tried and true strategy by the president to take credit for the more hopeful moment, as the coronavirus vaccines have provided a path out of the pandemic.

“This administration inherited a tide that had already turned,” he said in the official GOP response to Biden’s address.

From polling, it’s clear Biden’s view is winning the day — at least so far — with more Americans approving of his job performance than ever did of Trump, with strong marks even from Republicans for handling the pandemic.

In President Biden’s first address to a joint session of Congress on Wednesday night, he opened by declaring, “America is on the move again.”

MAKING THE CASE FOR BIG GOVERNMENT

In the past, presidents from both parties used similar speeches to talk about the limits of government. Biden went in the opposite direction, offering a resounding embrace of the role Washington can play in improving lives.

The president ticked off details of some of his plan for $1.8 trillion in spending to expand preschool, create a national family and medical leave program, distribute child care subsidies and more.

The plan comes on top of his proposal for $2.3 trillion in spending to rebuild roads and bridges, expand broadband access and launch other infrastructure projects.

Republicans have shown little interest in Biden’s spending plan. Senate Minority Leader Mitch McConnell has argued that Biden’s plans are a “Trojan horse” that will lead to middle-class tax hikes.

But Biden and his aides say all of this new spending is a wise investment in Americans — and doable at a time of low interest rates. Much of it can be paid through raising taxes on the wealthy and would go a long way toward addressing the frailties of life for the middle class and working poor exposed by the pandemic, Biden argues.

“I'm not out to punish anyone,” Biden said. “But I will not add to the tax burden of the middle class of this country.”

While achieving bipartisan backing for the proposals is a long shot, Biden seems to be betting he can win support across the electorate.

He even made a thinly veiled pitch to blue-collar and non-college-educated white men who voted for Trump in November, noting that 90% of the infrastructure jobs that will be created by his spending plans don’t require a college degree and 75% don’t require an associate’s degree.

More on Biden's Address to Congress: 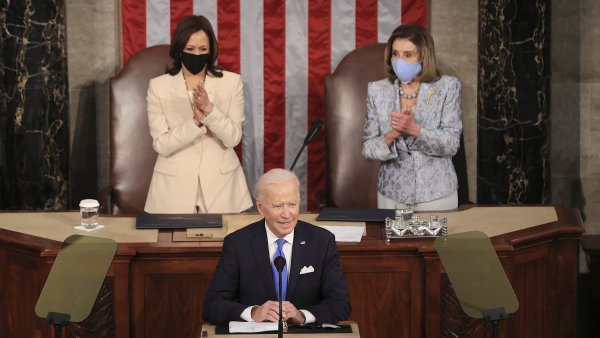 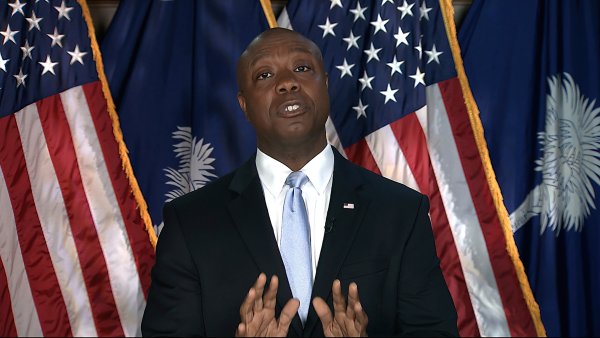 In GOP Rebuttal, Sen. Scott Says ‘America Is Not a Racist Country'

A week after former Minneapolis police officer Derek Chauvin was convicted in the killing of George Floyd, and as the nation continues to grapple with a disproportionate number of Black men being killed by police, Biden called on Congress to meet the moment.

“We have all seen the knee of injustice on the neck of Black America,” Biden said, referencing Floyd’s death under Chauvin's knee. “Now is our opportunity to make real progress.”

Biden, who won the presidency with strong support from Black voters, called on Congress to send him a police reform bill named after Floyd by the anniversary of his death, May 25. But he also went further, saying he aimed to root out systemic racism in housing, education and public health.

“We have a giant opportunity to bend the arc of the moral universe toward justice,” said Biden. “Real justice.”

President Joe Biden called on Congress to come together to enact police reform, referring to the George Floyd Justice in Policing Act that recently passed the U.S. House. “We need to work together to find a consensus, but let’s get it done next month, by the first anniversary of George Floyd’s death,” Biden said.

Biden was elected on the promise of delivering action on gun control, immigration reform and voting rights protections, but even he seemed muted about the prospects for action on these priorities.

Biden spoke in emotional terms about gun violence and appealed to Republicans who have expressed support for providing a path to citizenship for people brought to the U.S. illegally as children.

“The country supports it,” Biden said repeatedly. “Congress should act.”

The issues were too important to the Democratic base to leave out. But they face stiff opposition among the GOP in the Senate, where 10 Republicans would have to join with Democrats to overcome a filibuster.

‘WE HAVE TO PROVE DEMOCRACY STILL WORKS’

Biden said that while the nation’s democracy survived the deadly Jan. 6 insurrection at the Capitol meant to block the certification of his election, leaders in Washington must do more to boost the resilience of the nation’s system of government.

Biden argued that the nation’s adversaries “look at the images of the mob that assaulted this Capitol as proof that the sun is setting on American democracy.”

It was a familiar refrain for Biden, who has sounded an alarm about the nation’s divisions for years, but the urgency spiked after Jan 6.

Still, the appeal for unity appeared unlikely to sway many minds in Congress. Republicans have already lined up in opposition to Biden's agenda, and the push for a bipartisan commission to probe the insurrection has struggled to gain support.

Vice President Kamala Harris and Speaker of the House Nancy Pelosi made history Wednesday when they were seated behind President Joe Biden’s first address to a joint session of Congress. It’s the first time two women sit behind a U.S. president during an address to Congress. “It’s about time,” Biden said.

Biden campaigned on a promise to substantively and stylistically move the country past Trump, and in keeping with that tone, he made no direct mention of the 45th president.

Instead, he spoke only of the “last administration,” blaming Trump and his team for abandoning an effort made by his old boss — Barack Obama — to financially assist the Northern Triangle nations in Central America. Migrants are now fleeing from those countries — El Salvador, Guatemala and Honduras — and arriving at the U.S. border.

In some ways, the absence of talk about Trump, who still falsely claims the election was stolen from him, isn’t surprising. Biden grumbled at a CNN town hall in February that he’s “tired of talking about Trump” and he wants to make the next four years about the American people.

His omission made clear he’s determined to move on.

In Sen. Tim Scott’s rebuttal to President Joe Biden’s address to Congress, the Republican from South Carolina discussed his own experience with discrimination and said ‘people are making money and gaining power by pretending we haven’t made any progress at all.’
Copyright AP - Associated Press