The launch, reported by South Korea and Japan, represents an escalation of tensions over Kim Jong Un’s weapons program

North Korea test-fired possibly its biggest-yet intercontinental ballistic missile toward the sea Thursday, according to its neighbors, raising the ante in a pressure campaign aimed at forcing the United States and other rivals to accept it as a nuclear power and remove crippling sanctions.

The launch, which extended North Korea’s barrage of weapons tests this year, came after the U.S. and South Korean militaries said the country was preparing a flight of a new large ICBM it first unveiled in October 2020.

"This launch is a brazen violation of multiple UN Security Council resolutions and needlessly raises tensions and risks destabilizing the security situation in the region," White House Press Secretary Jen Psaki said in a statement Thursday morning."The door has not closed on diplomacy, but Pyongyang must immediately cease its destabilizing actions"

South Korea’s military responded with live-fire drills of its own missiles launched from land vehicles, a ship and aircraft.

It said it confirmed readiness to execute precision strikes against North Korea’s missile launch points as well as its command and support facilities. The South’s reaction underscored a resumption of inter-Korean tensions as nuclear negotiations remain frozen.

South Korea’s Joint Chiefs of Staff and Defense Ministry said the ICBM missile fired from the Sunan area near capital Pyongyang traveled 1,080 kilometers (671 miles) while reaching a maximum altitude of over 6,200 kilometers (3,852 miles). This indicated the missile was fired on a higher-than-usual angle to avoid reaching the territorial waters of Japan. 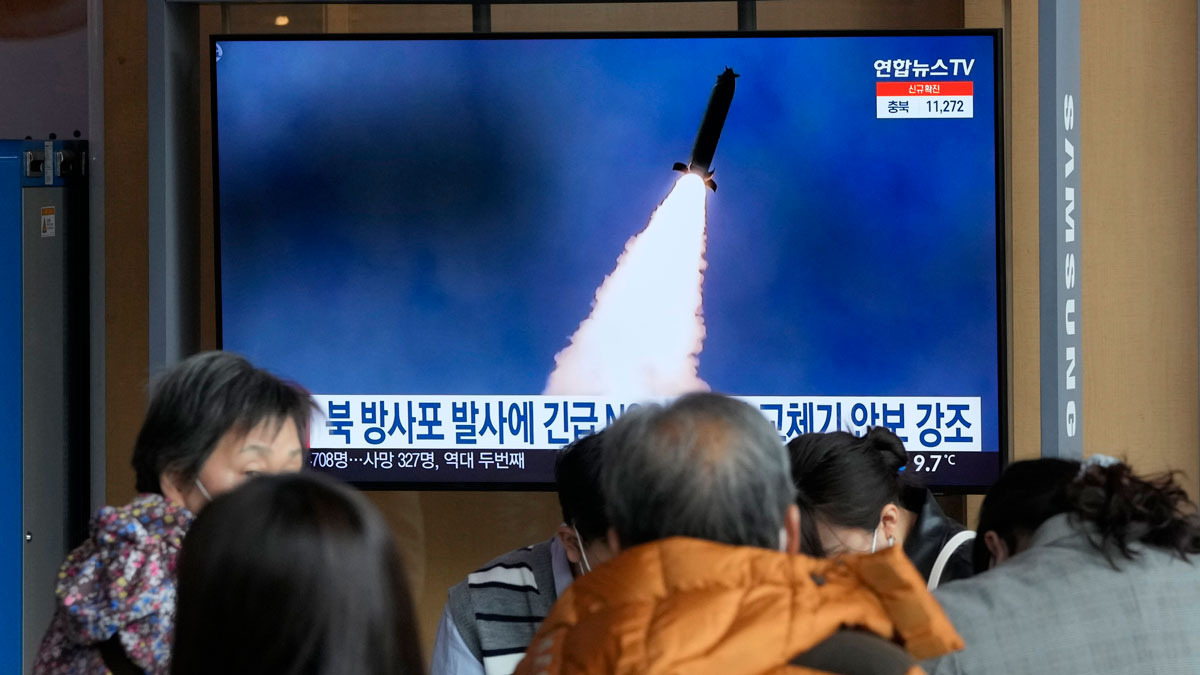 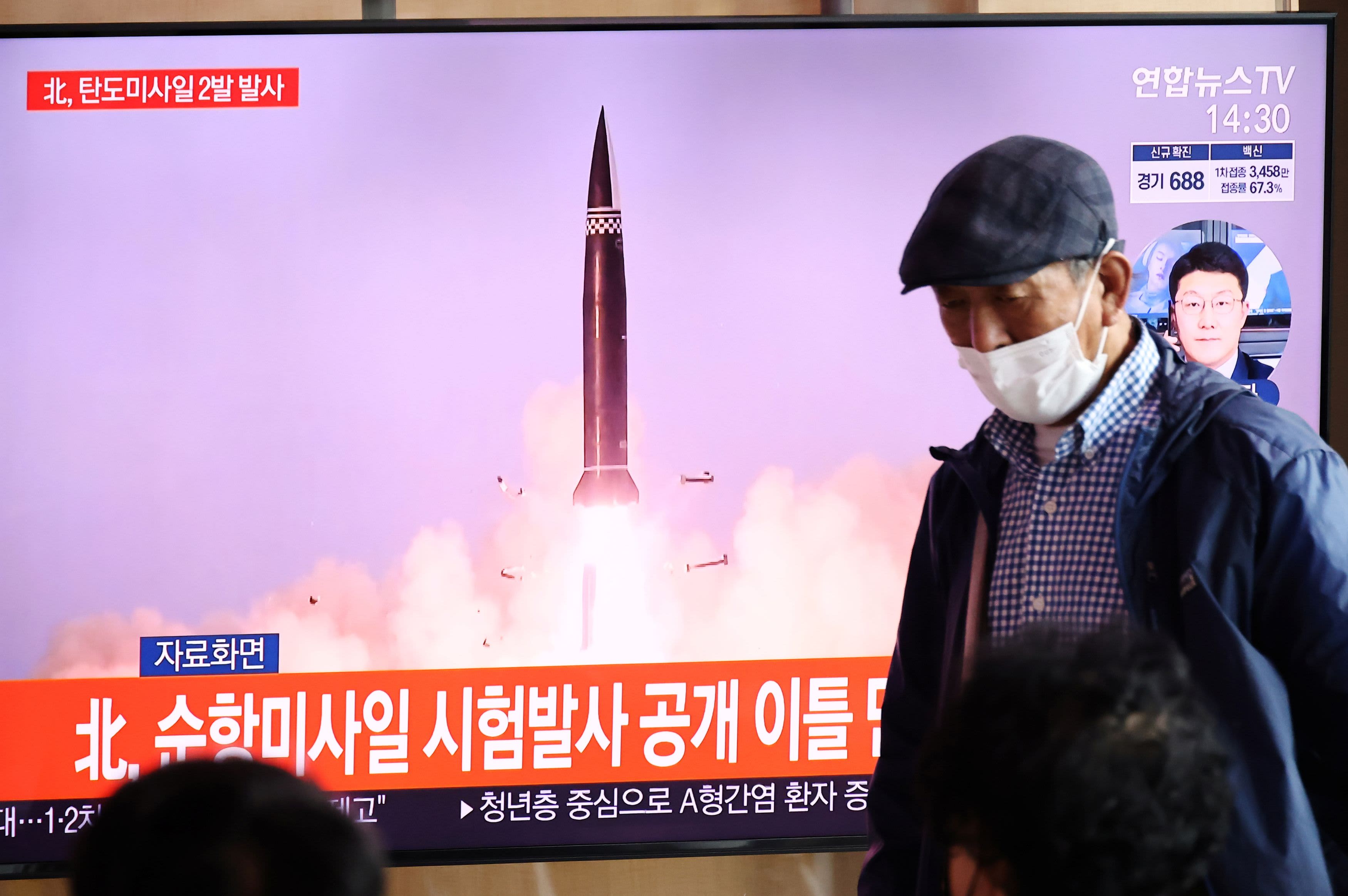 Tokyo’s Chief Cabinet Secretary Hirokazu Matsuno said the missile flew for 71 minutes and that Japan may search for debris inside its exclusive economic zone to analyze the North’s weapons technology. Japan’s coast guard issued a warning to vessels in nearby waters, but there were no immediate reports of damage to boats or aircraft.

South Korean President Moon Jae-in called an emergency National Security Council meeting where he criticized North Korean leader Kim Jong Un for breaking a self-imposed moratorium on ICBM tests and posing a “serious threat” to the region and the broader international community. Moon instructed officials to pursue “all possible response measures” based on its alliance with the United States and cooperation with other international partners, his office said.

“The door has not closed on diplomacy, but Pyongyang must immediately cease its destabilizing actions. The United States will take all necessary measures to ensure the security of the American homeland and Republic of Korea and Japanese allies,” she said, referring to South Korea’s formal name.

Following a highly provocative streak in nuclear explosive and ICBM tests in 2017, Kim unilaterally suspended such testing in 2018 ahead of his first meeting with then-U.S. President Donald Trump.

North Korea’s slew of weapons tests reflects a determination to cement its status as a nuclear power and wrest badly needed economic concessions from Washington and others from a position of strength, analysts say.

Kim may also feel a need to trumpet his military accomplishments to his domestic audience and drum up loyalty as he grapples with a broken economy worsened by pandemic border closures.

“Despite economic challenges and technical setbacks, the Kim regime is determined to advance its missile capabilities,” said Leif-Eric Easley, a professor of international studies at Seoul’s Ewha Womans University. “It would be a mistake for international policymakers to think the North Korean missile threat can be put on the back burner while the world deals with the pandemic and Russia’s invasion of Ukraine.”

The Biden administration’s passive handling of North Korea so far, while it focuses on Russia’s invasion of Ukraine and an intensifying rivalry with China, is allowing more room for the North to dial up its testing activity, some experts say. The administration’s actions on North Korea have so far been limited to largely symbolic sanctions imposed over its recent tests and offers of open-ended talks that were quickly turned down by Pyongyang’s leadership.

There are views in Seoul that Washington is slipping back to the Obama administration’s “strategic patience” policy of ignoring North Korea until it demonstrates seriousness about denuclearization, although that approach was criticized for neglecting a gathering nuclear threat.

It was North Korea’s 12th round of weapons launches this year and came after it fired suspected artillery pieces into the sea on Sunday.

The North has also tested a variety of new missiles, including a purported hypersonic weapon and its first launch since 2017 of an intermediate range missile with a potential of reaching Guam, a key U.S. military hub in the Pacific.

It also conducted two medium-range tests in recent weeks from Sunan, home to the country’s main airport, that the U.S. and South Korean militaries assessed to have involved components of the North’s largest ICBM. The allies had said the missile, which the North calls Hwasong-17, could be tested at full range soon.

Those tests were followed by another launch from Sunan last week. But South Korea’s military said the missile likely exploded shortly after liftoff. Details of the explosion and the possibility of civilian damage remain unknown.

North Korea’s official media insisted that the two successful tests were aimed at developing cameras and other systems for a spy satellite. Analysts say the North is clearly attempting to simultaneously resume ICBM testing and acquire some level of space-based reconnaissance capability under the pretense of a space launch to reduce international backlash to those moves.

The launch may possibly come around a major political anniversary in April, the birthday of state founder Kim Il Sung, the late grandfather of current leader Kim.

The North’s previous ICBMs demonstrated potential range to reach the American homeland during three flight tests in 2017. Its development of the larger Hwasong-17, which was first revealed in a military parade in October 2020, possibly indicates an aim to arm it with multiple warheads to overwhelm missile defenses, experts say.

The North last flight-tested an ICBM in November 2017, when the Hwasong-15 flew about 1,000 kilometers (600 miles) for about 50 minutes at a maximum altitude of 4,000 kilometers (2,400 miles). It wasn’t immediately clear whether the missile from the latest test was the Hwasong-17.

Denuclearization talks with the U.S. have been stalled since 2019, when the Americans rejected North Korea’s demand for a major release of crippling U.S.-led sanctions in exchange for a partial surrender of its nuclear capabilities.

South Korea’s military has also detected signs that North Korea was possibly restoring some of the tunnels at its nuclear testing ground that were detonated in May 2018, weeks ahead of Kim’s first meeting with Trump. The military didn't say whether it believes the North was restoring the site to resume nuclear tests.