With Expedited Passports, Russia Extending Clout in Ukraine for Years

Besides the quick path to citizenship, Russia has offered residents of the self-proclaimed Donetsk and Luhansk republics membership in the Kremlin’s ruling party and other perks

Ivan Malyuta, a resident of Donetsk, a city in eastern Ukraine controlled by Moscow-backed separatists, applied for Russian citizenship this month and said he, his wife and three children will soon be getting Russian passports.

“I want to be a citizen of the Russian Federation. We are moving towards this, aren’t we?” he said at a Donetsk migration service office.

Malyuta and his family will join more than 720,000 residents of rebel-held areas in eastern Ukraine who have received Russian citizenship and passports in a fast-track procedure widely seen as an attempt to underscore Russia’s influence in the region.

Russia threw its weight behind a separatist insurgency in eastern Ukraine in 2014, shortly after annexing Crimea in response to a popular uprising in Kyiv ousting a Kremlin-friendly president.

Moscow has denied deploying troops or weapons to the rebel-held areas, with government officials repeatedly stressing that Russia is not a party to the conflict, which has killed over 14,000 people.

Besides the quick path to citizenship, Russia has offered residents of the self-proclaimed Donetsk and Luhansk republics membership in the Kremlin’s ruling party and other perks, such as its COVID-19 vaccines or trade preferences for local manufacturers.

Ukraine has been appalled by the efforts amid rising tensions and fears of a new invasion. Foreign Minister Dmytro Kuleba urged the European Union last week to impose sanctions on Russia for “its illegal mass issuing of Russian passports to Ukrainian citizens.” 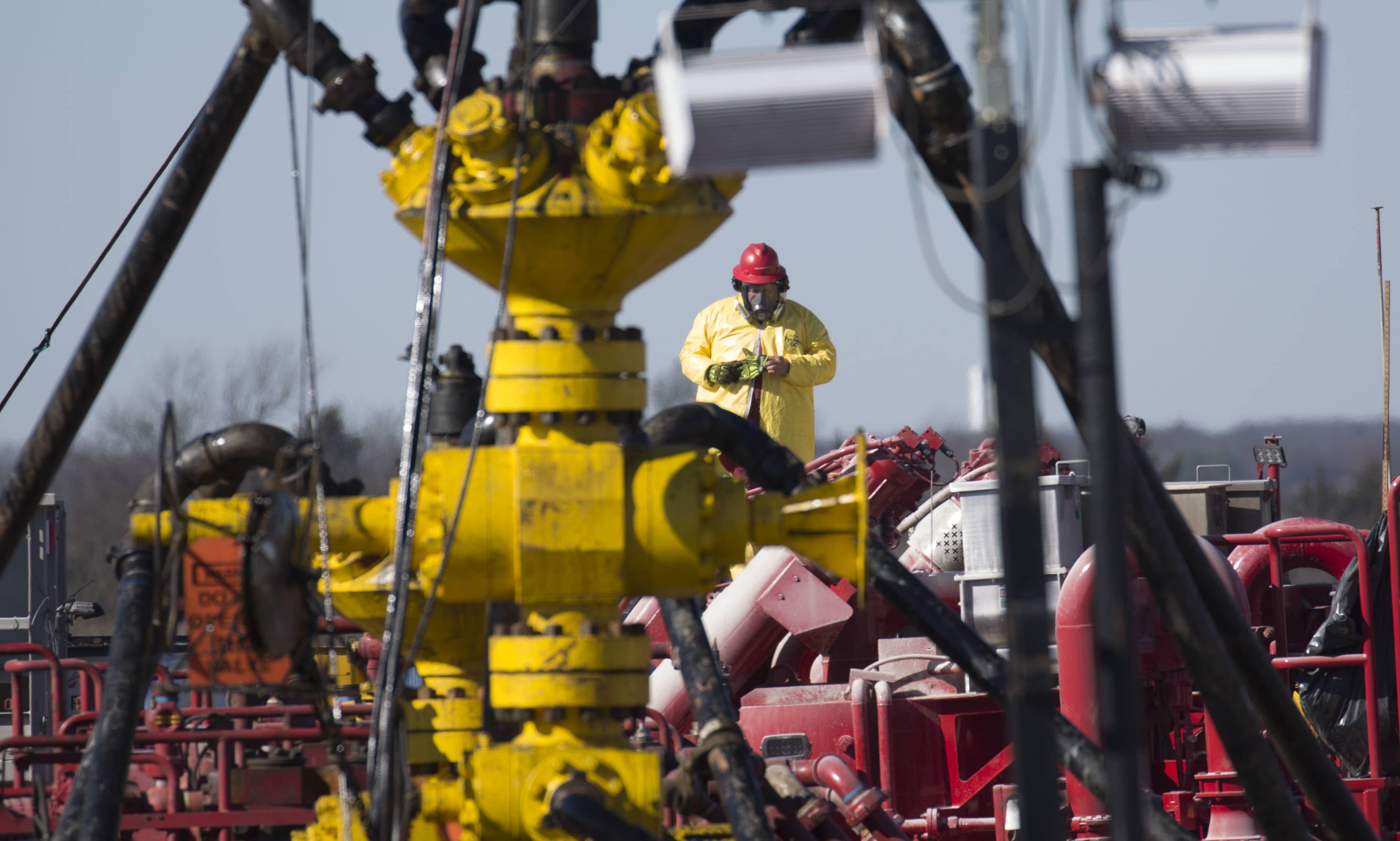 Putin's Threats Against Ukraine Could Reinvigorate the U.S. Oil and Gas Industry

On Tuesday, Russian lawmakers appealed to President Vladimir Putin to recognize the independence of the two self-proclaimed republics, eliciting even more outrage in Kyiv, with both the Foreign Ministry and parliament releasing statements condemning the move.

Putin hasn’t said how he will act on the request, but signaled he wasn’t inclined to support the idea, which would violate a 2015 agreement about their status.

Political analysts agree the Kremlin is unlikely to back independence for Donetsk and Luhansk any time soon, but will continue to reap political benefits from its involvement in eastern Ukraine.

“It’s a form of keeping the pressure on Kyiv, destabilizing it and hindering Ukraine’s movement towards European values, towards NATO,” said Moscow-based political analyst Dmitry Oreshkin.

Putin signed a decree simplifying the procedure for obtaining Russian citizenship for residents of Donetsk and Luhansk in April 2019 – the day after Volodymyr Zelenskyy's presidential victory was officially proclaimed.

Since then, more than 720,000 residents of the rebel-held areas – about 18% of the population – have received Russian passports.

Olga Matvienko, an official of the migration service in Donetsk, told The Associated Press the number of people applying for Russian passports has increased in recent weeks as tensions around Ukraine soared. She said the procedure has been “extremely simplified,” and takes just one to three months.

Donetsk residents who have applied say having Russian citizenship gives them a sense of protection from a powerful neighboring state.

“Relatives (in Russia) tell us that Putin won’t abandon us and everything will be fine,” said 62-year-old retiree Nelya Dzyuba.

Many also say it will allow them to travel to Russia and enjoy benefits Russian citizens are entitled to, such as free health care. For that, however, a passport holder must go through additional red tape, though Putin last month tasked the government with making access to benefits easier.

Ukrainian officials have charged that handing Russian passports to residents of the rebel-held areas violates a 2015 peace deal for eastern Ukraine brokered by France and Germany, a claim Moscow denies.

The deal, widely known as the Minsk agreements, put a stop to large-scale hostilities but failed to bring about a political settlement of the conflict. It envisioned Donetsk and Luhansk as part of Ukraine, but with broad autonomy from Kyiv, which has said that implementing the agreements would hurt Ukraine. The Kremlin, on the other hand, has insisted the Minsk deal is the only way to settle the conflict and has repeatedly accused Ukraine of sabotaging its implementation.

In 2008, Russia and its neighboring country of Georgia engaged in a five-day war that resulted in setting back the smaller nation's ambitions to join NATO and grow closer to the E.U. and Western world. As Russia now amasses military forces on its border with Ukraine, Stephanie Petrella, a fellow with the Foreign Policy Research Institute, explains how Russia’s history with Georgia may serve as a blueprint for what’s to come.

In an interview with the AP, Oleksiy Danilov, the secretary of Ukraine’s National Security and Defense Council, echoed his sentiment. “They have issued a crazy amount of Russian passports," he said, adding that "they’re involving these people in their political structure.”

Donetsk and Luhansk residents with Russian passports were allowed to vote in last year's Russian parliamentary elections and in the 2020 plebiscite on constitutional reform that permits Putin to run for two additional terms. They were bussed into the neighboring Rostov region in Russia to cast their ballots.

In December, the Kremlin’s ruling United Russia party also accepted top officials of the self-proclaimed governments in Donetsk and Luhansk into its ranks, along with some 200 ordinary residents of the rebel-held areas.

Analyst Oreshkin also noted the political benefit to the Kremlin, saying it could potentially lead to “almost a million additional votes for Vladimir Putin” and his United Russia party.

Amid warnings that Russia might invade Ukraine, some fear that Moscow might use the fact that there are hundreds of thousands of Russian citizens in Donbas as a pretext for military action to defend them.

President Joe Biden laid out the U.S. plan for sanctions and support to Ukraine and neighboring countries if Russia decides to invade Ukraine. He also urged Russia to solve the issues through diplomacy.

Russian officials have repeatedly accused Kyiv of plans to retake the rebel-held areas by force and have promised to respond if that happens. Commenting on the lawmakers’ appeal to Putin to recognize the self-proclaimed republics, State Duma speaker Vyacheslav Volodin said Tuesday that “our citizens and compatriots living in Donbas are in need of help and support.”

Mykola Sunhurovskyi, a military expert at the Kyiv-based Razumkov Center think tank, said that Russia “could use defending the interests of Russian citizens in Donetsk and Luhansk as pretext ... for starting the war.”

Sunhurovskyi noted that Russia used a similar pretext in 2008 during its war with Georgia after handing out Russian passports to residents of the breakaway regions of South Ossetia and Abkhazia.

Analyst Oreshkin said, however, that the Kremlin is much more interested in keeping the status of the rebel-held areas in limbo and showing that it has a number of options on the table — be it recognizing their independence or deploying forces to protect Russian citizens there.

Ukraine was once part of the Soviet Union, and is now a buffer between Russia and European members of NATO, a military alliance led by the U.S. Sky News security and defense editor Deborah Haynes explains more about tensions in Ukraine and how negotiations are going between the U.S. and Russian leader Vladimir Putin.