Public school teachers, immigration advocates and social and racial justice groups took to the streets in May Day demonstrations across Pennsylvania on Monday.

Philadelphia's public school teachers haven't had a contract in four years and haven't had a pay raise in five years. About 1,000 teachers took personal days to protest at schools, stage a rally outside the district headquarters and march to City Hall. The district employs about 9,000 teachers.

"I've lost about $60,000 from not us getting a contract," he said at the protest outside City Hall. "It's ridiculous. In no other industry would this be acceptable."

Aura Townsend, who teaches English at George Washington Carver High School of Engineering and Science, said she works a second job at a youth shelter to help pay her mortgage and daughter's college costs.

Keziah Ridgeway, who teaches world history at Northeast High School, said she worked at a middle school last year with 50 children in each class because so many teachers had left over the lack of contract. 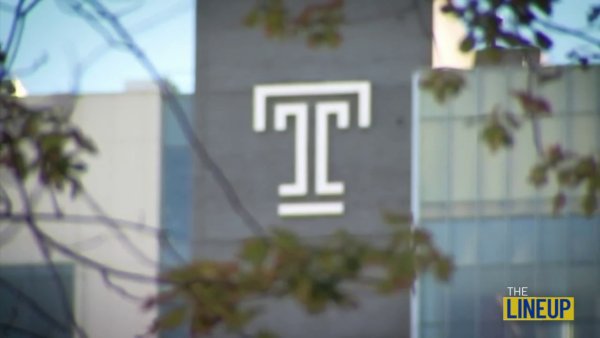 "Our kids deserve better," she said.

A school district spokesman said schools were open and the district worked with principals and the company that provides substitute teachers to ensure there would be no disruptions in the classrooms.

At City Hall, the teachers' protest was later joined by an array of marchers including immigrant support groups and others seeking racial and social justice. Many were inspired to vent about Republican President Donald Trump's policies.

Signs included slogans like "No ban, no wall," ''Refugees welcome" and "Silence the Hate" showing a gagged Trump.

A group of black-clad anti-fascists with covered faces and signs reading "America was never great" also joined the throngs.

About 50 workers who move and package airline meals chanted "We are human" and wore signs bearing the slogan in 10 different languages.

More than 200 immigrants, immigration advocates and leaders of labor unions and social and racial justice groups gathered on the steps of the Pennsylvania Capitol in Harrisburg for a May Day demonstration.

Speakers at the rally Monday criticized Trump over his comments and policies on immigrants. They said immigrants help Americans prosper.

Participants waved flags saying "We fight back." One man held a sign saying, "Feds: stay out of my community."