This Memorial Day was unlike any other. Although states have begun to ease their stay-at-home orders, many restrictions on public spaces and social gatherings remained in place for the unofficial start of summer.

Health officials urged people to stay home and warned against large crowds ahead of the long weekend. In some places, such as Daytona Beach, Florida, Lake of the Ozarks in Missouri, and Southern California, large crowds headed to the beach anyway. Many beaches in the Northeast, which has been hit particularly hard by the coronavirus, stayed quiet.

President Donald Trump marked the holiday by visiting Arlington National Cemetery and Fort McHenry in Baltimore, Maryland, on Monday. Presumptive Democratic nominee former Vice President Joe Biden also honored the fallen with a trip to a memorial in his home state of Delaware. It was the first time Biden, who was accompanied by his wife Dr. Jill Biden, has been seen out in two months. The Bidens sported face masks, which Trump has repeatedly avoided wearing.

The U.S. has confirmed 1.6 million cases and nearly 99,000 deaths from the coronavirus, according to Johns Hopkins University.

Also Monday, the World Health Organization announced it's suspending a trial of hydroxychloroquine — the drug Trump said he took — saying fears of its potential danger are is causing it to "err on the side of caution." 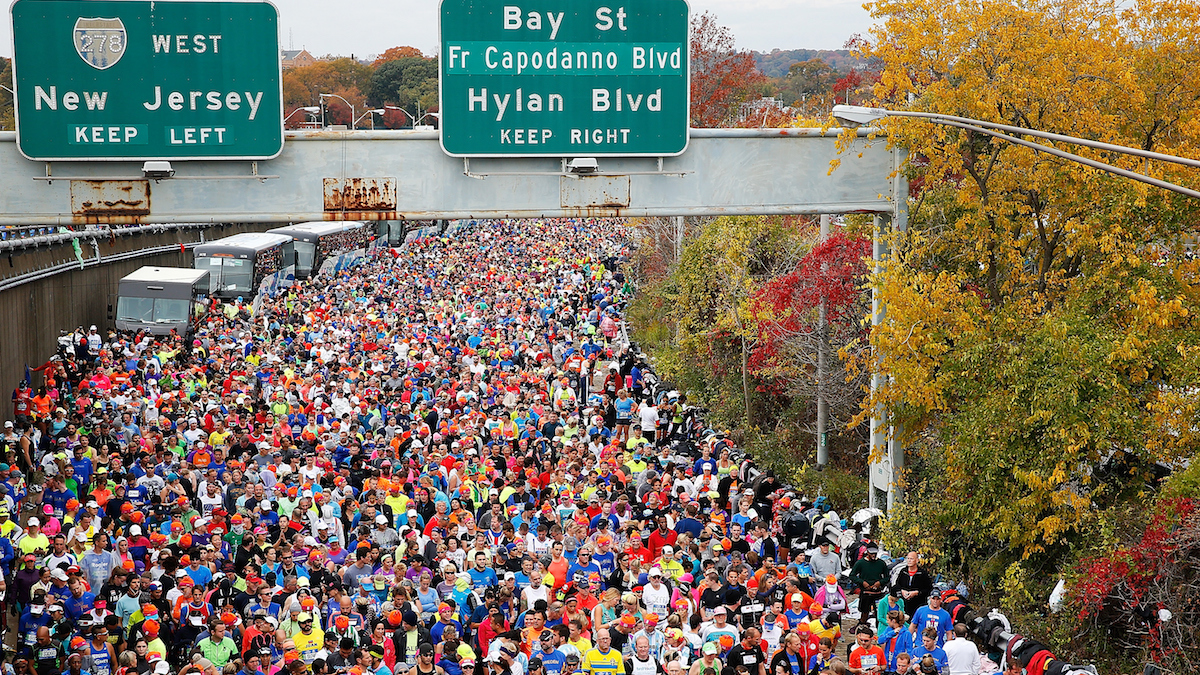 Running on Empty? Charity Events Wary in Time of COVID-19

"He's a fool, an absolute fool to talk that way. Every leading doc in the world is saying you should wear a mask when you're in a crowd," Biden said in a CNN appearance on Tuesday, adding that Trump is trying to act "macho."

Biden also changed his profile picture on Twitter to one of him wearing the same mask he donned during the services.

Trump, who did not wear a mask during Memorial Day services, retweeted Fox News commentator Brit Hume's Monday night tweet criticizing Biden, the presumptive Democratic presidential nominee, for wearing one. Monday’s appearance was Biden’s first public one since mid-March. He appeared wearing a black mask covering most of his face and a pair of aviator sunglasses with his wife, Jill Biden, who also wore a mask.

"Biden can wear a mask," Trump added, saying it was "unusual" since Biden does not wear one indoors. However, the administration's guidelines recommend wearing a mask outdoors.

New research out of Northwestern University could be a first step to answering the many questions that persist about how contracting the coronavirus during pregnancy affect mother and baby.

The small study followed 16 women who tested positive for COVID-19 and gave birth between late March and early May at Northwestern's Memorial Hospital in Chicago. Looking at the placenta, it found that these mothers "were significantly more likely" to develop abnormal or injured blood vessels, according to the research published in the American Journal of Clinical Pathology.

While all of the full-term babies in the study tested negative for the coronavirus and were doing well when they left the hospital, study author and obstetrician Dr. Emily Miller said in a statement, “Not to paint a scary picture, but these findings worry me. I don’t want to draw sweeping conclusions from a small study, but this preliminary glimpse into how COVID-19 might cause changes in the placenta carries some pretty significant implications for the health of a pregnancy."

Read the full story at TODAY.com.

Georgia Gov. Brian Kemp is lobbying for the Republican National Convention to be moved to his state, a day after President Donald Trump demanded assurances from North Carolina’s Democratic governor that the convention can go forward in August despite coronavirus fears.

Kemp sent an open plea to Trump on Tuesday to consider his state as an alternate site for the quadrennial convention. It's set to gather more than 2,500 delegates and thousands more guests, press and security officials.

Plans have been underway for more than a year to host the convention in Charlotte, but Trump and national Republican officials have expressed concerns that local officials may not allow gatherings of that size amid the pandemic.

Over the weekend, Trump complained that North Carolina Gov. Roy Cooper was “unable to guarantee that by August we will be allowed full attendance in the arena.”

He added that Republicans “must be immediately given an answer by the Governor as to whether or not the space will be allowed to be fully occupied. If not, we will be reluctantly forced to find, with all of the jobs and economic development it brings, another Republican National Convention site.”

Gov. Phil Murphy tweeted Tuesday that as long as the NFL’s Giants and Jets and the NHL’s Devils follow health and medical protocols, they could open training camps or even hold competition.

The NFL’s preseason and training camps wouldn’t begin until midsummer — teams are doing virtual workouts in place of the usual on-field activities because of the coronavirus pandemic. But the NHL is planning ways to complete the 2019-20 season. Should those plans include the Devils, they now can reopen their training facilities.

“Professional sports teams in NJ may return to training and even competition — if their leagues choose to move in that direction,” Murphy wrote on Twitter.

“We have been in constant discussions with teams about necessary protocols to protect the health and safety of players, coaches, and personnel.”

A Jets spokesman said: “We are working closely with Gov. Murphy’s office, the league and our medical staff to establish prudent, health and safety measures for our staff and players. Based on those guidelines, we will begin to open our facility using a phased approach at a time that is the most practical for our operations.”

The Giants echoed those sentiments and said: “With today’s announcement by the governor, we are finalizing our plans to reopen the Quest Diagnostics Training Center. We will continue to have as many employees as possible working remotely. For employees who need to return to work at our facility, we expect to begin that process next week, and we will do so in a systematic and safe way that adheres to the state’s guidelines and NFL protocols.”

New York Gov. Andrew Cuomo rang the opening bell to reopen the trading floor of the New York Stock Exchange for the first time since the coronavirus outbreak forced all-electronic trading in mid-March.

NYSE President Stacey Cunningham said on NBC's TODAY show Tuesday that the return "does not mean go back to business as usual."

Fewer traders will be on the floor at a given time for now in order to support six-feet social distancing requirements. They also must wear masks. Anyone entering the Exchange at 11 Wall Street is also being asked to avoid public transportation and they will have their temperature taken before entry.

"All of these steps we're taking are designed to protect those around us," Cunningham said. "It's about making sure that we're not contributing to the growth of this pandemic."

She said that the NYSE has asked workers at large companies to keep working from home and said that no one is being forced to come back to the floor.

While there are likely to be new cases of coronavirus that emerge, the new protections are designed to protect against an outbreak, she said.

"We're essential workers," Cunningham said. "We took a pause voluntarily because we wanted to learn more about the virus and about how to protect ourselves from it. We also wanted to make sure that we could limit the strain on the health care system on the communities down here. Over the past two months we've learned a lot."

A U.S. biotechnology company began injecting a coronavirus vaccine candidate into people in Australia on Tuesday with hopes of releasing a proven vaccine this year.

Novavax will inject 131 volunteers in the first phase of the trial testing the safety of the vaccine and looking for signs of its effectiveness, the company’s research chief Dr. Gregory Glenn said.

About a dozen experimental vaccines against the coronavirus are in early stages of testing or poised to start, mostly in China, the U.S. and Europe. It’s not clear that any will prove safe and effective. But many work in different ways, and are made with different technologies, increasing the odds that at least one approach might succeed.

“We are in parallel making doses, making vaccine in anticipation that we’ll be able to show it’s working and be able to start deploying it by the end of this year,” Glenn told a virtual news conference in Melbourne from Novavax’ headquarters in Maryland.

Animal testing suggested the vaccine is effective in low doses. Novavax could manufacture at least 100 million doses this year and 1.5 billion in 2021, he said.

U.S. Immunologist Dr. Rick Bright testified that the country should be concerned with the supply chain once a vaccine for coronavirus is developed.

Images of a jampacked pool party at Lake of the Ozarks in Missouri over the Memorial Day weekend prompted St. Louis County to issue a travel advisory and the Kansas City health director to call for self-quarantine of the revelers.

The advisory by the St. Louis County Public Health Department cited news reports of large crowds at Lake of the Ozarks, where hundreds of people were recorded squeezed closely together amid the coronavirus epidemic.

"This reckless behavior endangers countless people and risks setting us back substantially from the progress we have made in slowing the spread of COVID-19," Dr. Sam Page, the county executive, said in a statement.

The health department expressed concern in its travel advisory that people from the St. Louis area were at Lake of the Ozarks over the weekend. "Any person who has travelled and engaged in this behavior should self-quarantine for 14 days or until they receive a negative test result for COVID-19," the advisory said.