For Roy Aguilar, it seemed like a great opportunity. The 24-year-old North Philadelphia native and Drexel University graduate was applying for journalism jobs last year when he heard back from a company in China offering him a job as a blogger.

During his senior year at Drexel, Aguilar had made a 40-minute documentary focusing on different subcultures in Philadelphia. He wanted to expand his subject matter for his next film, and China was the perfect place.

“I liked it because I got to learn a little bit more about my city,” Aguilar told NBC10. “But I said, ‘Wherever I go next, I want to be able to do the same thing.’” 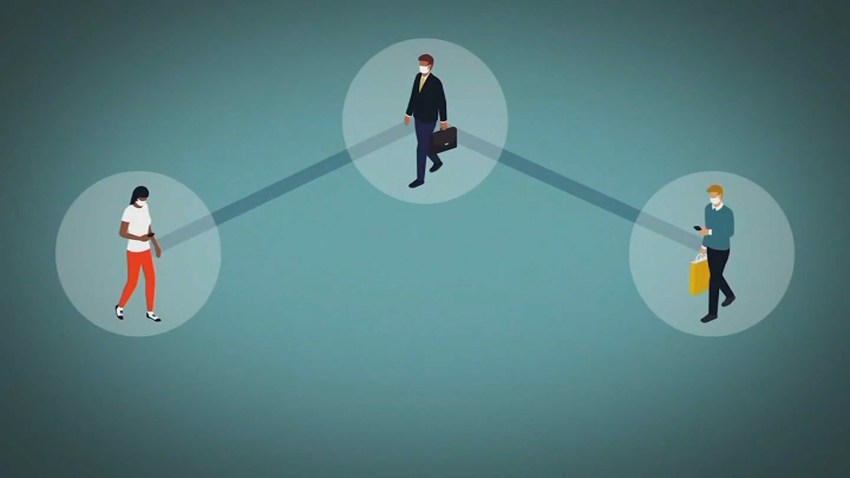 So he accepted the offer and moved to Beijing's Chaoyang District on November 6, 2019. Nearly a month later, a silent enemy emerged in China that changed not only Aguilar’s life but the lives of billions across the globe.

Aguilar initially dealt with the typical challenges anyone faces when moving to a foreign country. Given the language barrier, he carried two phones, one for translation, and it was tough for him to stay connected with the news.

“I didn’t keep myself in the loop with the news only because it’s all in Chinese,” he said. “It took me a while to set myself up with electronics, because I didn’t come with a VPN. So I couldn’t even access social media back home. The only information I could really get was from my boss, and she would really simplify it for me.”

In December, he began hearing about the first reported cases of the novel coronavirus in Wuhan. At first, Aguilar, who lived over 700 miles away, didn’t think much of it.

“I was like, ‘Oh, I’m going to be okay. I don’t think my life is going to be affected at this point,’” Aguilar said.

But by mid-January, the virus had already spread to other areas in China, including Beijing. That’s when Aguilar began hearing the warnings.

“My boss would send us translations of the media saying to be socially distant,” Aguilar said. “People already wore masks here due to the air pollution, so that wasn’t a problem.”

Philly Native Documents His Time in China During Coronavirus Pandemic

On Jan. 25, Aguilar traveled to Dandong, Liaoning Province -- an area in northeastern China -- to celebrate Chinese New Year. The next day, as he visited the New Yalu River Bridge, the existence of a COVID-19 case in Dandong was confirmed.

“Everything shut down,” Aguilar said. “No one hesitated. I found out because I got kicked out of a tourist site I was on.”

On Jan. 28, Aguilar took a train back to Beijing. Once he arrived, he had to write down his information and wait for approval to go back to his home in the Chaoyang District.

“At that point, anyone who had left Beijing and arrived back had to self-quarantine for 14 days,” Aguilar said, “a policy that continues today.”

While in quarantine, Aguilar began doing more research and realized the severity of the situation.

“My friends who are locals here started saying, ‘Hey, don’t go outside. Wear a mask. Be careful. Don’t be in crowded areas,’” Aguilar said.

Aguilar asked them about their experience dealing with previous outbreaks, including the SARS epidemic in 2003. They warned him that everything was shut down for eight months back then and to expect something similar with COVID-19.

That’s when Aguilar started to panic.

“I didn’t leave my apartment at all for three weeks,” Aguilar said. “I was too paranoid. I was too scared to go out, too anxious to touch people. I felt like I was in that Mark Wahlberg movie from M. Night Shyamalan. As soon as I felt a slight itch in my throat, I would think the worst thing.”

In early February, as the death toll in China continued to rise, Aguilar considered leaving and returning to the United States.

“I was talking to my parents and my family back home,” Aguilar said. “They were telling me from the start, ‘Just come back. Because the worst thing that could happen is something happens to you, the result is fatal, and we have to go up there and get your body.’”

“My family said, ‘Oh we can buy it.’ But I came out here because I also wanted to have a sense of independence,” Aguilar said.

Along with the need for independence came a desire from Aguilar to document a historic moment in real time.

“I had a hunch that this was going to hit other countries, and it was going to affect my family back home,” he said. “People were already asking questions so I felt that the journalist in me had a duty to stay here and try to warn people about what was going on, all from this side of the world, and give them perspective. So that’s why I ultimately decided to stay here. Plus, it’ll be a good story to tell my grandkids.”

As Aguilar settled in and accepted his new reality, his daily routine changed drastically. The local restaurants that allowed him to have breakfast, lunch and dinner for only $7 a day were closed. All that remained open were western restaurants like Burger King or McDonald’s, where you’d be lucky to get one meal for that same amount of cash. His job shut down as well, though he was fortunate enough to still get paid. Still, he began teaching classes online for another source of income.

“Everything I did before the outbreak has been completely thrown out the window,” Aguilar said. “I can’t do any of that anymore.”

Soon he found ways to cope as he remained under lockdown.

“I do pushups to try to maintain some sense of physical activity,” he said. “Read a book. I’ve written a ton of letters that I plan to send out to friends. I was lucky enough to have downloaded a crap-ton of movies. I have over 500 movies on a hard drive, and at this point I think I’ve seen every Steve Martin movie.”

But there were moments when Aguilar slipped up. That’s when he realized just how serious China was about safety measures.

“There was a day where I forgot, because you can’t leave your house without a mask,” he said. “Not wearing a mask is like wearing a Cowboys jersey at an Eagles game. You’re going to get dirty looks from people. People are going to harass you, particularly the police. Not in a bad way, but they just want to ensure safety.”

Aguilar was approached by a police officer who told him he needed to cover his mouth.

“So I just put my scarf over my mouth, and I went back to get my mask,” he said. “But even then I could see people looking at me and staring at me."

As the weeks passed, Aguilar began seeing reports of the virus spreading to the United States. That’s when he started to warn his loved ones to take it seriously.

“I told my family to prepare and luckily they listened,” Aguilar said. “They didn’t have to go out and buy toilet paper or be involved in any of the craziness.”

It was tougher to convince some of his friends.

“I have a lot of friends back home who were telling me, ‘Oh, how is it over there?’ I’m like, ‘You know it sucks, because I can’t go about my normal routine. If I were you, I would prepare, too,’” Aguilar said. “And they were saying, ‘No, it’s not going to hit over here. We’re not China. We’re going to be okay.’”

With the number of cases and deaths rising in the United States, Aguilar has mixed feelings about how his home country has dealt with the pandemic.

“I think [the United States] could’ve benefitted from just shutting down completely and then figuring things out from there, as opposed to the way that they’re doing it,” Aguilar said. “I was talking to a friend about this and he was like, ‘Oh man, dude, that’s so anti-American.’ I’m like, ‘I’m not anti-America. I’m pro-saving lives.’”

Aguilar also had a warning for those who still don’t take the virus seriously.

“‘I’m more likely to die in a car crash.’ You know, I’ve heard people say that,” Aguilar said. ‘Or, ‘More people die from the flu.’ That’s a very popular one. But the difference between those and the coronavirus is that there are still preventative measures. There’s a vaccine for the flu. With cars, there are seat belts. With the coronavirus, we have more questions than answers.”

After spending months on lockdown, Aguilar told NBC10 he’s starting to see signs of hope. Local restaurants, malls and other businesses are slowly opening up again in China.

"I’ve seen some bars open, but I do know when you go into any place, any restaurant where you go and sit down, you have to sign a form," Aguilar said.

Along with the form, your temperature must be recorded before you enter any business.

"They greet you with a temperature gun to the forehead," Aguilar said. "If you’re over 37 degrees Celsius (98.6 degrees Fahrenheit) then you’re not allowed in. So God forbid that you’re just sweating profusely that day."

Through it all, however, Aguilar has remained optimistic and impressed with the resolve and demeanor of the Chinese populace.

“If I felt like this was something that wasn’t beatable and this was the apocalypse then I would’ve certainly left,” Aguilar said. “But once I saw the discipline and tenacity of the Chinese people, I saw that this was beatable. And I think I’m going to stick around to see that, because I know it’s going to be a special day for everyone in the world once this is all gone.”

As for other countries who continue to fight the deadly pandemic, Aguilar wrote down words of advice and encouragement in his journal.

It’s a message that he hopes will resonate with his friends and family, especially his fellow Philadelphians.

“As the virus continues to spread across the globe, I anticipate more countries will take their restrictions further and further,” Aguilar wrote. “But nothing is more crucial right now than simply staying home. In order to beat this seemingly invisible enemy, this is what needs to happen.

"To anyone in the world who is experiencing anything similar to my situation for the first time, just know that I feel your angst, discomfort and frustration and confusion. But I promise you, once you find a routine, the days will just fly and pass until our doors can finally be opened, and we can watch the Sixers lose in the second round of the playoffs."