A Tornado Warning was in effect for Philadelphia and parts of the surrounding suburbs hours after a rare derecho already ravaged the region, leaving three people dead and hundreds of thousands of homes and businesses in the dark.

The Tornado Warning went into effect for Philly, Delaware County and parts of Camden and Montgomery counties around 7:20 p.m. as power storms with damaging winds ripped through the region. The Warning expired around 7:45 p.m. but severe storms continued to move through South Jersey before the system moved out around 9 p.m.

The heavy rain led to flooding in parts of the region, including I-76 near the Montgomery Avenue exit in Philadelphia.

The Warning came a few hours after a derecho hit the area. 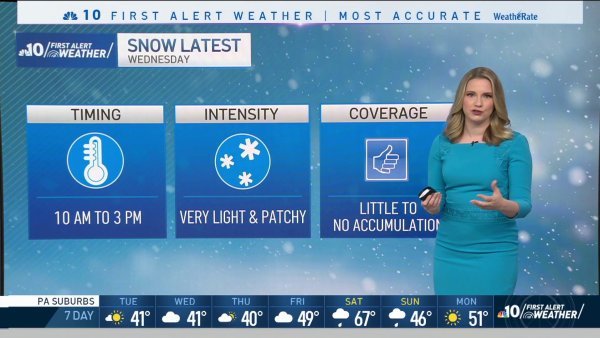 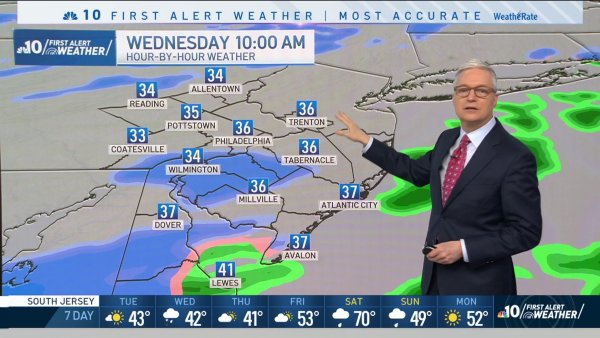 Tropical storm force winds toppled trees onto roadways and ripped roofs off of homes around noon. A peak wind gust of 83 mph was clocked in Berks County, Pennsylvania. Another gust of 73 mph was recorded in Philadelphia's Homlesburg section.

Those winds felled trees in neighborhoods across the region. In Montgomery County, falling trees led to the deaths of three people, county officials said.

A staff member at the Philmont Country Club in Lower Moreland died when a tree crashed through the roof of a building at the facility. Two people died in separate incidents when trees fell onto their cars in Lower Merion.

Jean Biegalski, 49, of Philadelphia, was driving a Chevrolet Equinox eastbound on Belmont Avenue near Rockhill Road around 12:45 p.m. when a large tree fell and struck the roof of the vehicle. Biegalski was pronounced dead at the scene.

The third victim was driving along Medford Road when a tree fell on the vehicle.

The National Weather Service recorded 185 storm reports during and immediately after the storm. More than 400,000 power customers were left without electricity in the Lehigh Valley, South Jersey and around Philadelphia at one point.

Residents and power crews from the Philadelphia suburbs to South Jersey will cleaning up Thursday morning after powerful storms downed trees and wires and damaged properties and cars. NBC10's Pamela Osborne reports from Collingswood, New Jersey.

Nearly 10,000 Met-Ed customers in Berks County had no power Thursday morning. Meanwhile, more than 4,000 AC Electric customers were without power, too.

A derecho is a line of severe thunderstorms that travels a single direction and which has a bowing line at its front. The weather phenomena has wind gusts of 58 mph or higher typically causing straight-line wind damage. The storm was traveling at some 90 mph as it blew through the region.

Derechos are considered rare in our part of the country. The last time a derecho happened in our area was in 2012. That storm left a line of damage from the Jersey Shore to Washington, D.C.

Give yourself extra time to get where you need to go Thursday morning as roads remains blocked by downed wires and trees.

Wednesday's quick-moving storm whipped up winds that shook trees and knocked over outdoor furniture in Philadelphia. In the Andorra section of the city, rescue personnel were onsite after someone became trapped when a large tree fell onto a car near the intersection of Ridge and Manatawna avenues.

A falling branch also took down a power line and sparked a small fire next to parked cars in the Spruce Hill neighborhood.  Another fallen power line sparked a blaze near the intersection of Bryn Mawr and Highland avenues in Bala Cynwyd.

Drivers on Buck Road, just east of the Pennsylvania Turnpike, were greeted to a strange sight when the wind lifted a trampoline off the ground and left it strewn on top of power lines

Drivers on Route 100 in Pottstown were dealt a road hazard when a tree there toppled onto the far right lane of the highway. A similar scene played out on the New Jersey turnpike north of Route 168.

Several crashes were being reported on local highways like Interstates 76 and 95.

Some protesters participating in demonstrations at Philadelphia's City Hall braved the rain for some time as the storm moved in. NBC10's Stephania Jimenez said the protesters were undeterred by the storm.

The atmosphere was ripe for another round of of severe storms as a cold front tried to move in during the afternoon. Part two of the storm brought damaging wind, hail and the threat of an isolated tornado. The National Weather Service has not yet confirmed whether a tornado officially touched down.

Stay with the NBC10 First Alert Weather Team for the latest weather updates.