Kyle Kendrick Is Still Hurt by Brett Myers Prank in 2008

Two days ago, we uncovered a prank John Kruk pulled on a young Chase Utley. Kruk made him think that he had to forfeit his first major-league hit -- a grand slam. 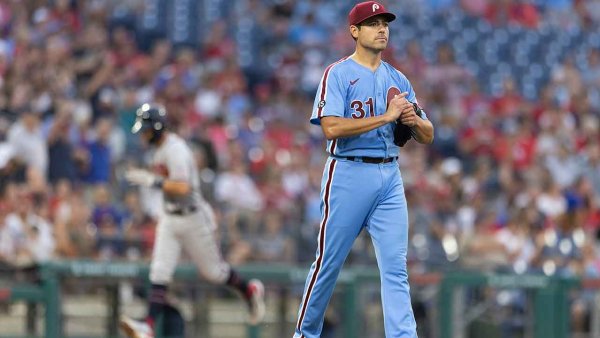 That prank was good, but it doesn't come close to the one pulled during spring training in 2008. Then a starter for the Phillies, Brett Myers played a prank on second-year major leaguer Kyle Kendrick, who was led to believe he was traded to a team in Japan.

MLB Network did rank the prank No.1 in a Prime Nine segment dedicated to MLB pranks.

Per Myers (who is now embarking on a country music career), all the credit for the prank needs to go to Leslie Gudel, formerly a reporter for CSN Philly, who was inspired by a similar prank that former Phillies pitcher Larry Andersen tried to pull off during his playing career.

However, Myers' prank was wildly successful.

"Leslie Gudel came up to me and asked me if I wanted to be part of a prank to pull on Kyle Kendrick," Myers said. "Basically, they had run this prank a long time ago. Larry Andersen had done this to someone else. So, they asked if I could do it to someone and I said, 'Yeah, I have the perfect guy.'"

That perfect guy was Kendrick, who somehow didn't realize that a major-league player couldn't be traded to Japan, or the fact that the player Kendrick was traded for, Kobayashi, is a competitive hot dog eater.

Last Sunday, Michael Silverman from the Boston Herald wrote a story on how Kendrick is still hurting from the prank and how Ruben Amaro Jr. has confronted him since now that the two are reunited with the Red Sox.

Amaro, now a first base coach, never apologized to Kendrick while with the Phillies, but did to Kendrick this spring for his involvement in the prank.

"I don't know if Kyle actually feels that way about it," Myers said. "But for Ruben to apologize to him about the thing. … I mean for people to remember Kyle for just the prank, who cares?

"If Kyle was so hurt by it and it affected him like that, then why did he allow this guy to write this article to bring it back up? All he did was stir the prank back up and continue to let it get more views on YouTube. The 10-year-old kid that never got it, that are now 19 or 20 years old, are watching it."

Myers was able to give us an untold story about how he was pranked during practice while in the minor leagues. This prank was a little more cruel and unusual than Kendrick's, so the Red Sox's pitcher shouldn't feel so bad about what happened in 2008.

"I had guys take my clothes and put them in ice and freeze them," Myers said. "They put them in a bucket of water, then put it in the freezer. All my clothes. And I came back to a block of ice with my clothes in it. Baseball is all about pranks and being funny and having fun."