What Should We Make of Eagles' OL After Week 1 Loss?

The Eagles gave up more sacks on Sunday than they had in over a decade. So what should we make of this O-line?

What the heck should we make of Eagles’ OL after Week 1 loss? originally appeared on NBC Sports Philadelphia

Anytime we start talking about Winston Justice and Osi Umenyiora, Eagles fans know exactly which game we’re talking about. And they’d probably rather us not. 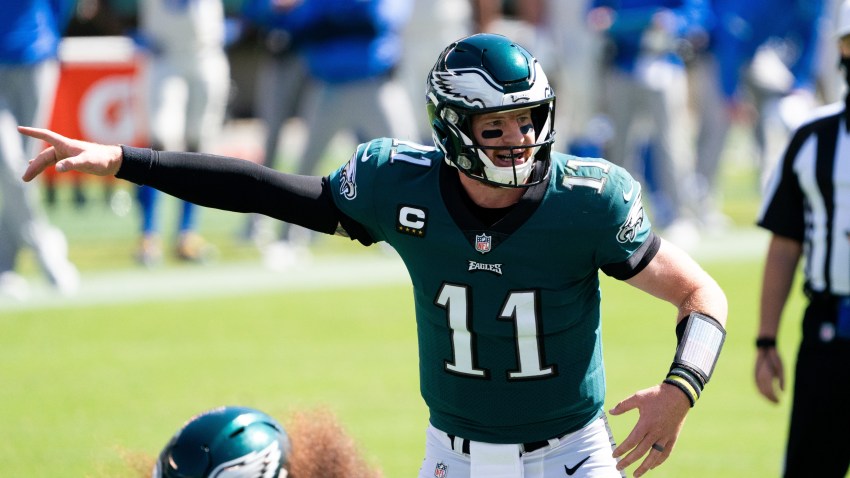 One Eagle Set an NFL Record Sunday That Nobody Noticed

Because if we’re bringing up that game, you know it’s not about any good news.

The Eagles blew a three-score lead on Sunday and lost 27-17 to a football team without a name. During the collapse at FedExField, the Eagles gave up a staggering eight sacks to Washington.

That’s when Umenyiora turned Justice into a turnstile as the Giants beat the Birds 16-3 behind a 12-sack performance in a game that will live in infamy in the deep and dark recesses of Eagles fans’ minds.

But this game wasn’t like that — it wasn’t that clear cut. All eight sacks on Sunday can’t be pinned on just one lineman. Heck, all those sacks can’t even be pinned on the line.

“It’s a lot. I’ve got to look at the tape obviously to make a clear determination on that but ultimately, that cannot happen.”

No, it obviously cannot.

The Eagles went into this weekend hoping Lane Johnson would be able to play but he was inactive. Johnson is still recovering from an ankle injury and surgery and simply had too much swelling. So instead of Johnson, the Eagles ended up playing rookie Jack Driscoll at right tackle. At one point, Driscoll left the game and they were then forced to ride it out with Jordan Mailata in his first-ever football game that counted.

Howie Roseman’s whole strategy of roster construction is based on the idea of building through the lines. But as the Eagles started the 2020 season, their line wasn’t exactly what they had in mind.

The OL Eagles wanted this year:

It’s really hard to evaluate the performance of the offensive line on Sunday. It certainly wasn’t good, but this was also a makeshift group that hasn’t really spent much time together and they were blocking for a quarterback who refused to throw the ball away several times.

Jason Kelce found a good way to sum up their performance against a good Washington line:

“I know that the numbers don’t really seem to suggest that the line played great and we didn’t,” Kelce said. “We didn’t play great. We played very average to poor at times. And everybody took their turns contributing to that.”

All that is true.

But it wasn’t like any individual really stood out for the wrong reasons. There was no Winston Justice on the field Sunday.

“I don’t think anybody in particular played an individually terrible game,” Kelce said. “That’s probably not what you guys want to hear but I think everybody kind of had their chances to screw this one up, myself included. I could have played better and I think everybody across the board had their moments where they could have got the job done better."

Coming into Sunday’s game, this was obviously the scariest matchup for the Eagles. They had an offensive line in question and Washington’s strength is their defensive front. I still thought the Eagles’ O-line would be able to do a decent enough job to get a win; I was wrong.

So now the Birds have to hope Johnson heals up enough to be ready for Week 2. They could really use him.

But it’s fair to wonder if that’ll be enough.

And it’s fair to wonder how long Wentz will last if he keeps taking beatings like that.

“I feel fine,” Wentz said after the game. “It’s obviously been a while since I’ve been hit, just in general. Week 1 soreness is definitely going to set in tonight.”

At least Wentz won’t be alone. It kind of feels like the entire city got sacked eight times today.