Police began arriving almost immediately after Ahmaud Arbery was shot in a coastal Georgia subdivision, finding the unarmed Black man lying facedown in his own blood while the man who shot him paced with hands on his head.

Body camera video from Glynn County police officers who responded to the fatal shooting Feb. 23 shows the first interactions authorities had with Gregory and Travis McMichael, the white father and son who armed themselves and chased the 25-year-old Black man after spotting him running in their neighborhood. The Atlanta Journal-Constitution first reported on the footage, which it obtained after the video was filed with public court documents in the murder case against the McMichaels.

Travis McMichael can been seen cooperating with an officer taking photos of his blood-spattered arms and a bruise on his face, where he says Arbery punched him. The officer asks him to be patient while police collect evidence.

“I want it done right, because this doesn’t look good,” Travis McMichael says. “I mean, I just shot a man. Last thing I’ve ever wanted to do in my life.” 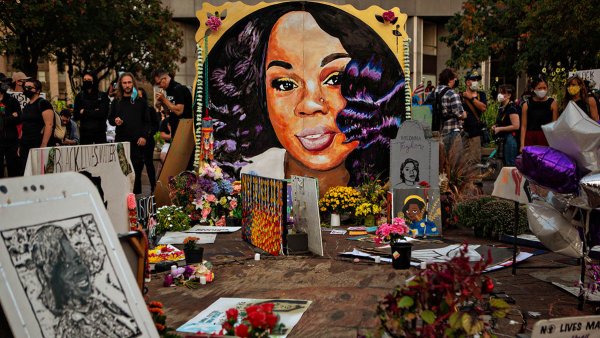 Attorneys for the McMichaels argue they were justified to pursue Arbery because they suspected he was a burglar and that Travis McMichael acted in self-defense when he blasted Arbery three times with a shotgun. Prosecutors say Arbery was no criminal but merely out jogging and the McMichaels acted as illegal vigilantes.

More than two months passed before the McMichaels were charged in Arbery's death, after cellphone video of the shooting became public and the Georgia Bureau of Investigation took over the case from local police.

The body camera footage shows the first officer arrive soon after hearing gunshots and finds the McMichaels standing on either side of Arbery, sprawled face-down on the pavement.

"All right guys, everybody’s got their weapons up, correct?” the officer asks. The men aren't holding guns.

Gregory McMichael can be seen trying to console his son, who's pacing back and forth.

“It's going to be OK,” Gregory McMichael tells him. “You had no choice.”

Two 911 calls made just before the February shooting death of Ahmaud Arbery were released. Gregory McMichael and Travis McMichael were arrested and charged with the murder of Arbery on Thursday.

One of Arbery's legs moves and his head turns slightly. A gasping sound can be heard on the recording.

The second officer to arrive puts on rubber gloves, rolls Arbery over and presses a hand to the wound in his chest.

“I know. I'm going to try to do something for him," the officer replies. He stops after about two minutes and calls to tell dispatchers Arbery has died.

Gregory McMichael had recently retired from a long career as an investigator for the local district attorney. At least two of the arriving officers recognized him and called to him by name. Those he doesn't know he tells that he's a former law officer, and that the .357 magnum handgun he grabbed before chasing Arbery was police-issued.

Gregory McMichael tells police Arbery attacked his son and “was trying to take the shotgun away from him.”

“To be perfectly honest with you, if I could've got a shot at the guy, I’d have shot him myself,“ he tells one officer.

Another officer approaches and says: “I do know Greg. How are you doing?”

He asks her what police plan to do with his son.

“Y’all aren’t putting him in cuffs are you?” Gregory McMichael says.

“No," the officer replies. “Why would he be in cuffs?”

Family attorney questions release of police videos showing encounters Ahmaud Arbery had with officers in 2017, saying they're trying to shift attention away from his murder.

Prosecutors have said it was Arbery who was fighting for this life when he was shot. Cellphone video shows Arbery trying to run around the McMichaels’ pickup truck before coming face-to-face with Travis McMichael holding a shotgun. The video shows Arbery punching him and grappling for the gun in between gunshots. Arbery staggers and falls after the third shot hits him at point-blank range.

The video was taken by William "Roddie" Bryan, a neighbor who joined the chase and also was later charged with murder. The body camera footage also shows Bryan's first interview with police.

Like the McMichaels, Bryan says he believes Arbery was responsible for break-ins in their neighborhood. It was later revealed that it was an open-framed house under construction that Arbery was seen entering, and an attorney for the owner later said nothing was stolen.

“He obviously was up to something,” Bryan tells an officer, while describing how he maneuvered his own truck to try to prevent Arbery from escaping.

“Should we have been chasing him?” Bryan says. “I don’t know.”

State investigators with the GBI arrested the McMichaels on murder charges the day after the agency began its own investigation in May. A judge has denied bond for all three defendants, whose attorneys are appealing the decision to keep them jailed.

The Glynn County officers dispatched to the shooting don't seem to question the McMichaels' account that they were justified to kill Arbery.

In one video, an officer standing outside the crime-scene tape asks another: “Did he shoot him? A self-defense thing?”

“That’s what it looks like,” the other officer replies.

Nikkolas Smith’s portraits of George Floyd, Breonna Taylor and others are capturing the spirit of the Black Lives Matter movement by highlighting the value of Black life.

This story has been corrected. Gregory McMichael was not an attorney — he was a retired investigator for the local district attorney.