Martese Johnson, a third-year student at the University of Virginia, was injured during an early Wednesday morning arrest

About 1,000 students gathered at the University of Virginia campus Wednesday night to demand justice for a student who was injured during an arrest and had blood streaming down his face as he was held down by an officer.

Virginia Gov. Terry McAuliffe has also called for an investigation into the early-morning arrest of Martese Johnson, whose lawyer said he needed 10 stitches in his head.

The Alcoholic Beverage Control agent who made the arrest, listed in court records as J. Miller, said in the arrest report that Johnson "was very agitated and belligerent." 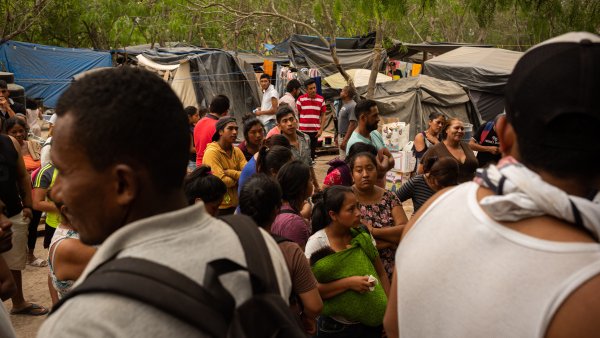 A statement from a group calling itself "Concerned Black Students," however, claims the arrest of Johnson was unprovoked and extreme.

"The brutish force used resulted in his head and bodily injuries," the group said in a statement. "His treatment was unprovoked as he did not resist questioning or arrest."

Wednesday night's rally was moved several times, finally ending up at an outdoor amphitheater after more students than expected showed up.

"If we don't get it, shut it down!" many chanted in unison.

"It's about justice," said Steven Lewis, a graduate student from Atlanta. He said he came out to express his "outrage" over what happened. "This seemed like the only thing to do."

Johnson was on hand for the event, flanked by fellow students. He spoke briefly and kept touching his face where he received stitches from the early Wednesday morning scuffle with police.

"I beg for you guys to please respect everyone here," Johnson told the crowd. "We really are one community."

School President Theresa Sullivan made a brief appearance on the grassy field, but only spoke to several reporters and did not make any formal remarks to the crowd.

Earlier Wednesday, UVA student Bryan Beaubrun said he was with Johnson and photographed the arrest.

Beaubrun said Johnson was trying to get into the Trinity Irish Pub when he was stopped by a bouncer. Then, an ABC officer grabbed Johnson by the arm and pulled him away from the bar to speak with a group of police officers, Beaubrun said.

He said Johnson hit his head on the ground when he was tackled and that police acted with unnecessary force.

"He didn't need to be tackled. He wasn't being aggressive at all," Beaubrun said.

Johnson's lawyer, Daniel P. Watkins, released a statement Wednesday night saying that Johnson "is absolutely devastated" by what happened. He described Johnson as a 20-year-old, third-year student at UVA who is majoring in Italian and Media Studies, holds "numerous leadership positions" at the school, and has no criminal record.

"We are preparing to investigate and defend this matter vigorously," Watkins said.

McAuliffe's office issued a statement asking state police to investigate "the use of force in this matter."

The ABC issued a statement saying that "uniformed ABC Agents observed and approached" an unidentified individual "after he was refused entry to a licensed establishment" about 12:45 a.m. at an area of bars and restaurants near campus known as "the Corner."

The ABC said the unidentified individual received injuries while being arrested and was treated at a local hospital before being released.

The ABC said the agents involved with the arrest are being restricted to administrative duties while a state police investigation is underway.

ABC agents in Charlottesville have been accused of heavy-handed actions in the past.

The state of Virginia reached a $212,500 settlement last year with a UVA student who was arrested after her purchase of water was mistaken for beer.

Elizabeth Daly fled in terror outside a Charlottesville supermarket in April 2013 when her vehicle was swarmed by state ABC agents who mistook her just-purchased carton of sparkling water for beer.

According to Daly's lawsuit, badges worn around the casually dressed ABC agents' necks were not clearly visible and the defendants did not verbally identify themselves as officers.

Daly was charged with eluding police and assaulting a police officer after her SUV grazed two of the agents. The arrest provoked a public outcry, and the charges were dropped.