Amid a renewed push to ban smoking in Atlantic City's casinos, a new report released Wednesday predicts that doing so could cost up to 2,500 casino jobs and nearly 11% of casinos' revenue as they struggle to rebound from the coronavirus pandemic.

A group of casino workers and smoking opponents criticized the report, saying it prioritizes profits over the health of employees and customers. They also said it fails to examine what would happen in subsequent years as patrons get used to a smoking ban, citing the experience of some tribal casinos where it rebounded.

The Casino Association of New Jersey commissioned the report, which did not recommend whether smoking should be banned, an option that is gaining renewed support in the state Legislature. New Jersey's Democratic governor, Phil Murphy, has said he will sign a smoking ban into law if a bill is passed.

Among other findings, it determined that smokers, who account for 21% of Atlantic City gamblers, are worth more to casinos than non-smokers in that they tend to lose more money and spend more on non-gambling items.

He said casino employment and visitation to Atlantic City are both at 20-year lows, and in-person gambling revenue has yet to return to pre-COVID levels, down 5% in 2021 compared to 2019.

“Now is not the time to enact a smoking ban,” he said, adding that doing so “could cause a devastating effect to the community and state.”

Nicole Vitola, a Borgata dealer and a leader of the group pushing for a smoking ban, said workers “cannot continue to choose between our health and a paycheck.”

“This study, paid for by the casino industry, shows once again that they care more about outdated business practices than they do about the lives and health of their workers,” she said. “Casinos’ blatant disregard for our well-being is disgraceful, especially after they just received tens of millions of dollars in tax breaks from the state."

The group Americans for Non-Smokers' Rights cited a July tribal gambling conference in Las Vegas at which panelists reported that revenue lost during the first year of smoking bans rebounded in subsequent years to higher than what it was before the bans.

They also cited a comment last fall from Bill Miller, president of the American Gaming Association, that some casinos have enacted smoking bans “without detrimental effects.”

Smoking is allowed on 25% of the casino floor in Atlantic City. The casinos claim that banning it would send smokers fleeing to neighboring Pennsylvania, where many casinos allow smoking.

A group of Atlantic City casino workers, aided by national non-smoking groups, has been pushing for over a year for New Jersey to close the loophole in its public smoking law that allows it to continue in casinos; it is banned in most other indoor spaces.

They complain of developing respiratory ailments and other harm from breathing second-hand smoke, despite the millions invested by casinos in filters and air purifying technology. 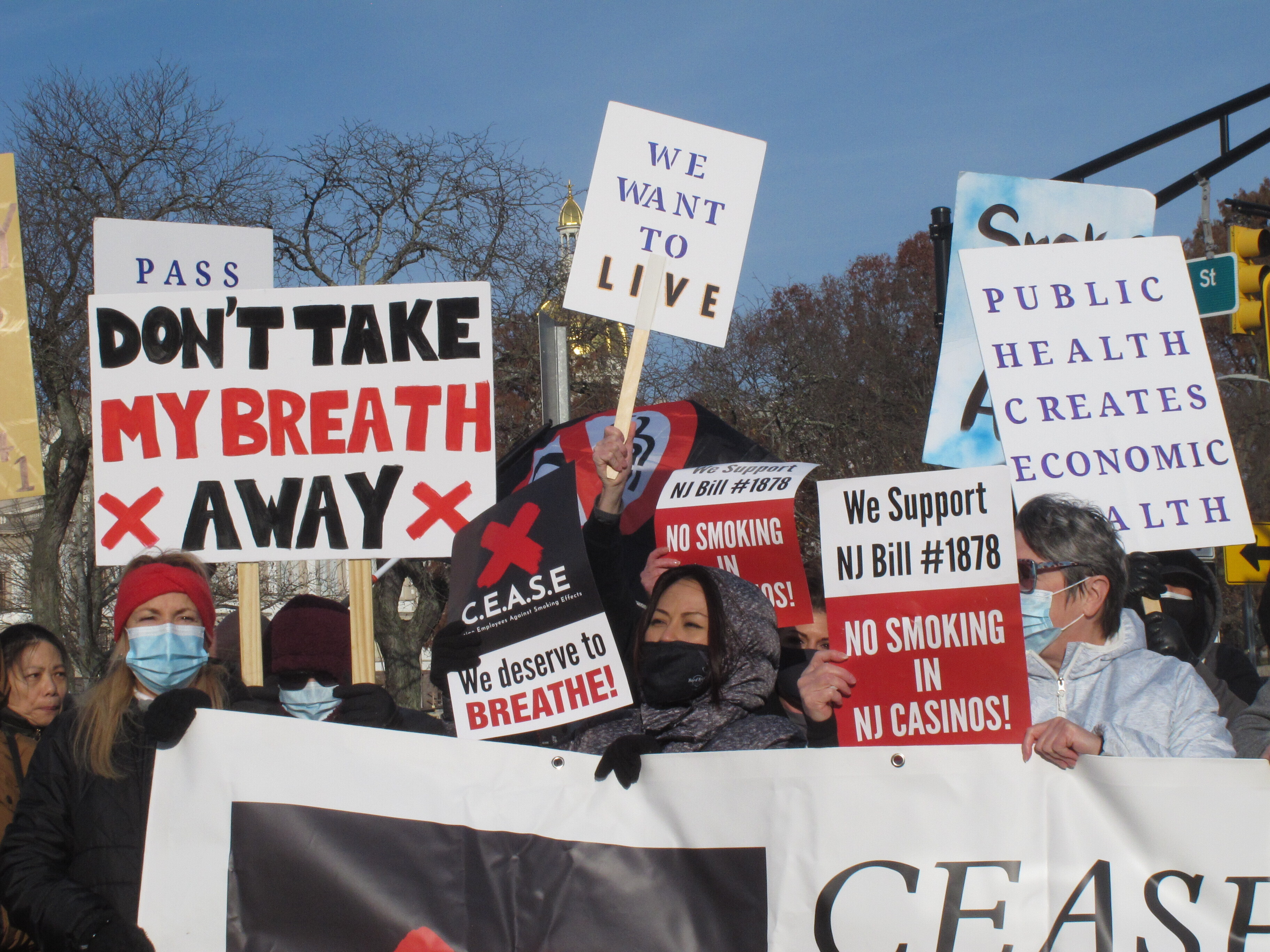 Legislation to end casino smoking died in last year's legislative session, but has been reintroduced this year, and has garnered bipartisan support.

Atlantic City banned smoking for four weeks in 2008, but dissatisfied with the results, quickly restored it to the current 25% level. In the first week of the ban, casino winnings declined by 19.5%, according to casino workers union officials and state regulators.

The report asserted that between 1,021 to 2,512 jobs could be lost in the first year of a smoking ban in Atlantic City. Spectrum used data from 2019 that found that each casino job was supported by $155,008 of gambling revenue.

They also interviewed casino executives, workers and customers, and anti-smoking advocacy groups, and studied the experience of other states that have banned casino smoking.

At the high end of its projections, the report says 10% of Atlantic City's casino workforce could lose their jobs if smoking is banned.

The report also acknowledged that some non-smoking patrons would be more likely to visit casinos if smoking was banned. But the report found that the extra business would not be enough to offset an overall decline in gambling revenue.

It does not expect every smoker to stop coming to Atlantic City's casinos if smoking is banned. The report predicted that smokers would constitute 13% of total visitors to the casinos, and they also have the option of gambling online.

Correction (March 1, 2022, 8:53 a.m.): This story has been corrected to show that Spectrum Gaming Group’s report predicted smokers would constitute 13% of casino visitors.