The most severe of the bunch was an EF-3 twister that touched ground in Bensalem, Pennsylvania, and brought winds peaking at 140 mph

The number of confirmed tornadoes in Pennsylvania and New Jersey grew to nine on Sunday, as the scope of this week’s severe storms continues to come into focus.

The National Weather Service said an EF1 tornado with winds peaking at 90mph touched down in Weisenberg Township, Pennsylvania. The tornado traveled 1.6 miles, uprooting trees and damaging crops but claiming no lives.

The NWS on Friday began surveying the trail of destruction across the region as it confirmed multiple tornadoes. The most severe of the bunch was an EF-3 twister that touched ground in Bensalem, Pennsylvania, and brought winds peaking at 140 mph.

It was the first EF-3 tornado to hit Pennsylvania since July 17, 2004, according to the NWS. 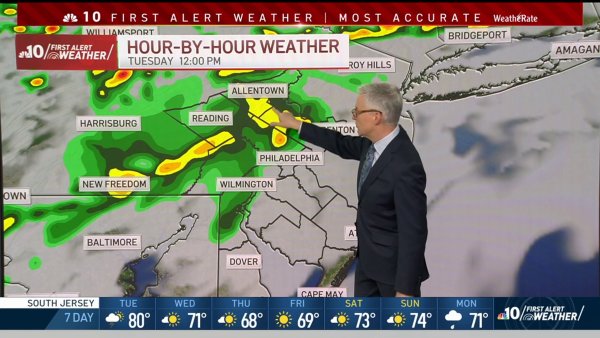 Residents in the Trevose community of Lower Bucks County told NBC10 reporter Aaron Baskerville what it was like to live through a tornado.

In addition, the NWS confirmed two tornadoes in the Waretown and Cedar Bridge area in Barnegat Township, New Jersey. The twisters brought with them wind racing between 100 and 105 mph.

Another two tornadoes were confirmed in Bucks County. One began in New Hope starting in Washington Crossing Park, and then crossing the Delaware River into Mercer County, New Jersey. The initial tornado on the Pennsylvania side was EF-1 and the one on the New Jersey side was EF-2.

In Lehigh County, the NWS confirmed Saturday that an EF-2 occurred in Slatington. This one had peak winds up to 85 mph.

The tornado that struck initially in Waretown, Ocean County, was upgraded Friday afternoon to EF-2, with 115-mile-per-hour winds. It actually became a water spout for a period of time as it crossed the Barnegat Bay, and re-emerged on Long Beach Island as a tornado, the NWS said.

A seventh twister, categorized as an EF-0, which is lowest on the scale, was confirmed in Northeast Philadelphia. Peak winds on that tornado were 80 mph.

Nearly half of this year’s tornado warnings for the greater Philadelphia region were issued over the course of just a few hours Thursday, as severe storms battered the area.

Employees inside the Faulkner car dealership in Trevose, Pennsylvania, suffered minor injuries after a tornado tore through the complex. Some employees recorded what happened as the twister hit.

Additionally, Thursday was the first time the NWS issued a “particularly dangerous situation” tornado warning. The PDS label implies that there is an enhanced risk of very severe and life-threatening weather.

SkyForce10 was over the Bensalem area after the storm, showing homes and buildings that were ripped apart, including the Faulkner Mazda car dealership in Trevose.

The tornado tossed cars like toys, blew out windows, tore down a Mazda sign and injured at least four people at the dealership. Fortunately, everyone was accounted for and the injuries were considered minor.

In one Bensalem neighborhood, a trampoline landed on a tree in someone's yard.

"It's crazy. Water is flooding everywhere in the town and there's cones and you still have people driving around the cones and driving through the water," East Windsor Fire Company Deputy Chief Jay Laughlin said.

Laughlin told NBC10 it's been a while since he's seen flooding that bad.

"Last time we saw flooding like this was Hurricane Sandy and everyone knows how bad that was," he said.