Patchy Snow Is Expected in Some Places, But Not Much Will Fall

Some light snow and flurries are expected Wednesday

Temps in the 60s on Monday gave way to colder conditions on Tuesday ahead of the chance for light snow as the Philadelphia region rides a weather roller coaster this week.

Wednesday's system is expected to mostly miss our area too far to the south, meaning any snow that falls will be patchy and light. So, don't plan on digging out the snow blowers just yet.

Here's what we know: 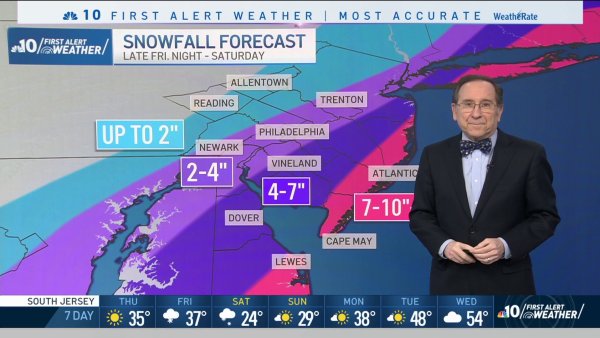 More Than Half a Foot of Snow Expected in Parts of NJ, Del. as Nor'easter Hits Saturday 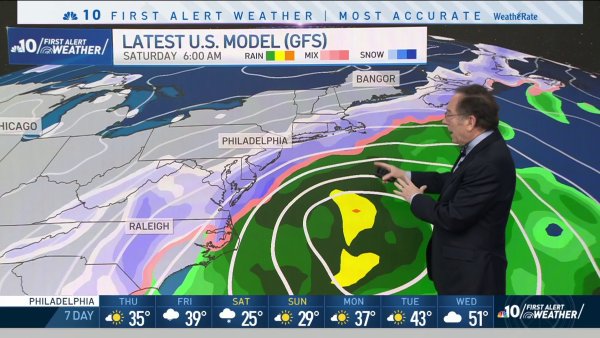 Temperatures pushed into the mid-60s on Monday in Philadelphia and surrounding communities (it got as high as 67 in some places) under mostly cloudy skies. Winds (of change) picked up Monday afternoon and continued into the evening as some rain showers moved through.

The mild weather didn't last long, a dramatic temperature drop is in place Tuesday through Thursday with highs ranging from the upper 30s to lower 40s.

Tuesday was dry -- that changes Wednesday.

Wednesday is the day to watch for a chance of light snow showers. But, a reminder it shouldn't be major and impacts are expected to be minor.

A few flurries could develop Wednesday morning in the Lehigh Valley and Berks County. Then late morning, some light snow showers or flurries are expected to push into the southern half of our area. The snow will be patchy, and some areas are expected to miss out entirely on any precipitation.

The best chance of seeing snowflakes will be during the day while temperatures are above freezing -- topping out around 40 -- for many Philadelphia area neighborhoods.

Accumulation is no longer expected, due to marginal temperatures and the light, patchy nature of the snow. At best, a dusting to 1/4-inch is possibly in localized spots, only on grassy surfaces. Roads and travel will not be impacted.

The latest data indicates the central part of our region, along the I-95 Corridor and Pennsylvania suburbs, could struggle to see anything fall. A bit farther south, into New Jersey and Delaware, some light snow and flurries may mix with rain before quickly exiting in the afternoon.

After the midweek chill, we rebound back into the 50s Friday and possibly into 60s (or even 70s) Saturday. There is a chance for rain showers over the weekend.

The best bet to keep ahead of the big changes expected this workweek is to make sure you have the most up-to-date NBC10 app downloaded on your device and to keep checking in with the First Alert Weather Team on NBC10 News throughout the day.