A severe storm system is moving through Wednesday, dropping temps to near freezing by Thursday morning

Severe storms with the potential for wind gusts of 60 mph and hail the size of quarters are roaring through the Philadelphia region Wednesday afternoon ahead of temperatures plunging. The quick-moving storms even caused a brief rain delay for the afternoon Phillies' game.

The National Weather Service issued a severe thunderstorm warnings for parts of Pennsylvania, New Jersey and Delaware throughout the early afternoon. 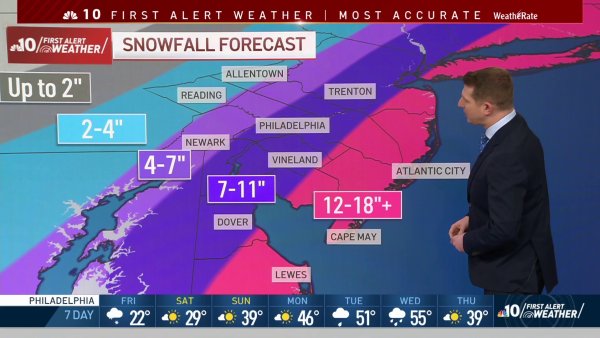 The NBC10 First Alert Weather team has issued a First Alert for the storms through 4 p.m.

Any remnants of rain should be gone by Wednesday evening.

The biggest threat from Wednesday's storms was a chance for damaging winds that could gust up to 60 mph. At Philadelphia International Airport a gust of 52 mph was reported while the winds gusted to 54 mph at Millville Municipal Airport. The Phillies-Giants game was delayed for about 45 minutes as the storm moved through.

You could also see some hail the size of quarters and lightning strikes. Parts of Berks and Montgomery counties already saw hail the size of pennies early in the afternoon. There is a threat for power outages.

Temps quickly dipped behind the storms as the western suburbs had temps already in the 50s by 2 p.m. while parts of South Jersey were in the 70s.

The winds set us up for a Thursday morning low temperature around 35 degrees and a wind chill in the 20s. That is nowhere near a record, but it sure is NOT common this far into April.

A freeze warning is in effect for upper Bucks, Berks, Lehigh western Montgomery and Northampton counties Thursday morning. You may want to take in vulnerable plants or cover any plants susceptible to the cold.

The chill won’t last long. Once the sun comes up Friday, temperatures will start to rise rapidly, quickly jumping back to the seasonable 60s.

And Saturday could reach 70 degrees before another cold front brings rain for part of the weekend.

Stay ahead of every element Mother Nature has for you by tuning into the First Alert Weather Team on NBC10 News and getting the latest weather by downloading the NBC10 app.