At least four people are dead from the remnants of Hurricane Ida and whole neighborhoods, including Center City in Philadelphia, are still swamped by creeks and rivers. Tornadoes also touched down and ripped apart homes.

Editor's Note: This story is no longer being updated. For the latest on Ida's impacts on the Philadelphia region, click here.

At least four people died in the greater Philadelphia area as a result of severe storms that pummeled the region, bringing widespread flooding, hundreds of water rescues and at least seven tornadoes.

In Montgomery County, Pennsylvania, officials said two people drowned in floodwaters and a woman was killed by a falling tree in Upper Dublin, where the National Weather Service confirmed a tornado with peak wind speeds of up to 130 mph touched down.

Officials in the county said that nearly 500 water rescues had been carried out since Wednesday, more than three times as many as any previous single storm's total. The last record was set just 13 months ago when Tropical Storm Isaias struck and 135 water rescues took place.

Those who escaped death were left reeling by flooded homes and roadways, as well as homes, trees and power lines toppled by powerful winds. 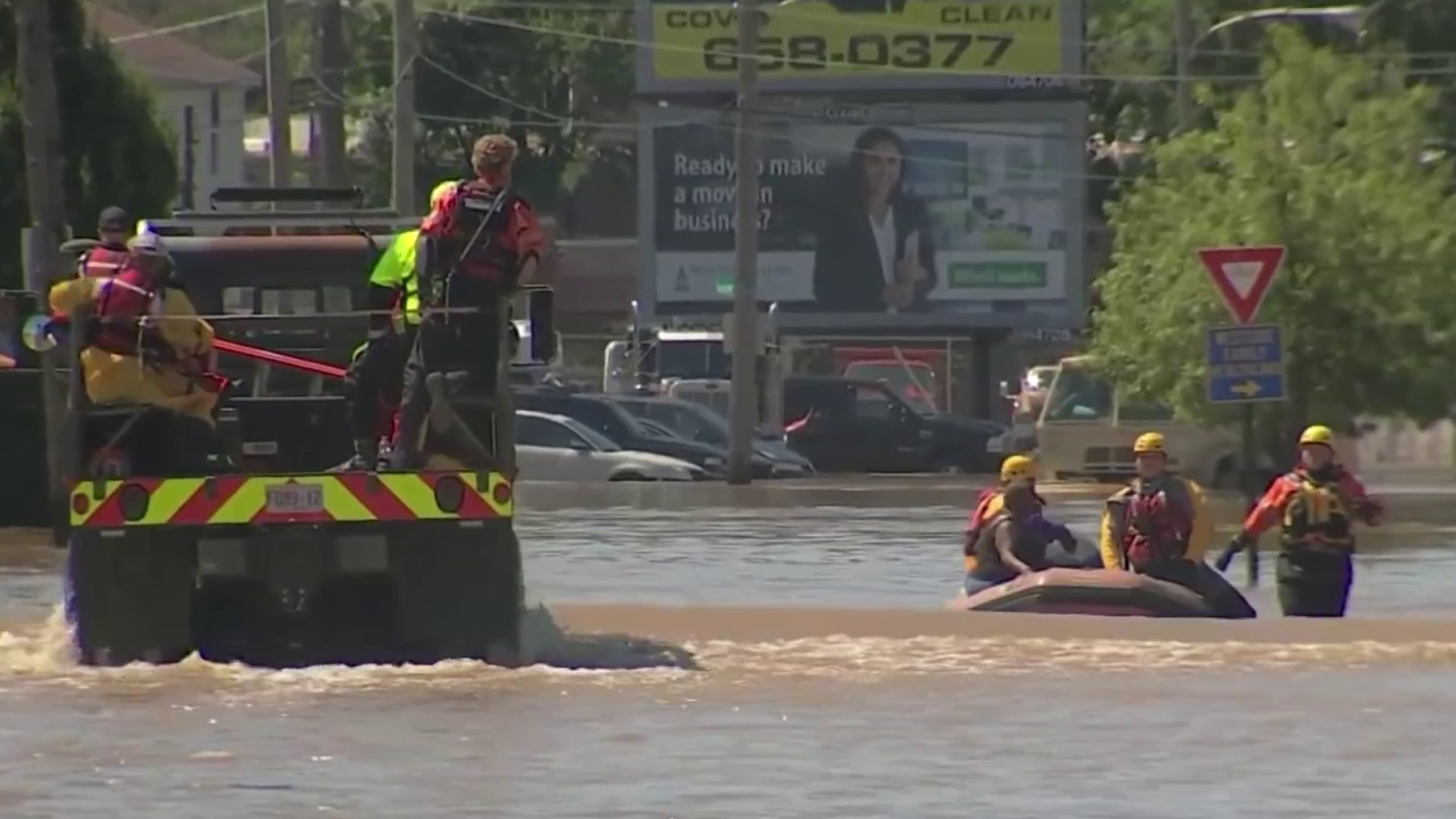 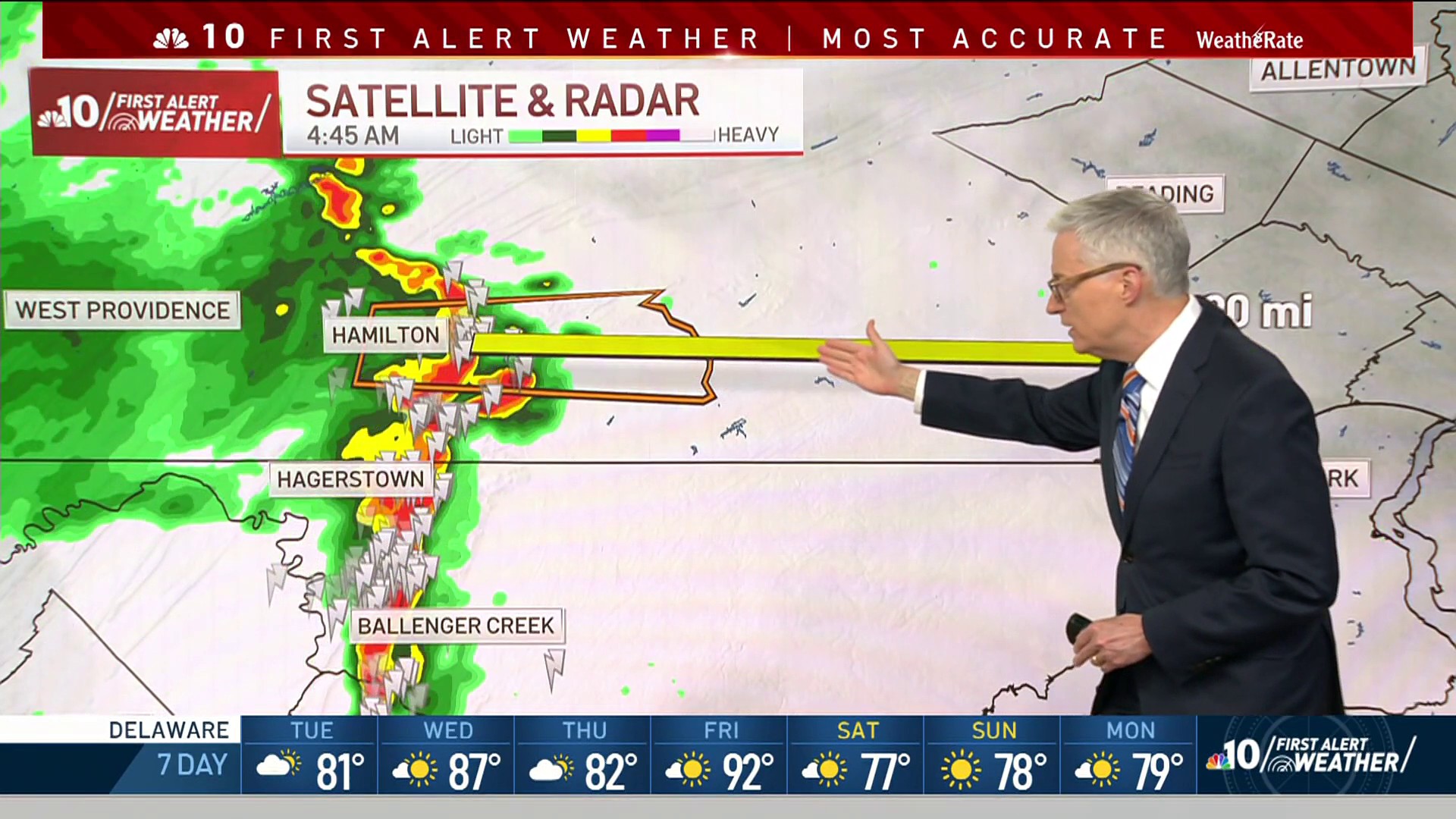 Governors in both Pennsylvania and New Jersey declared disaster emergencies.

Wednesday’s rain moved out overnight, then flooding took center stage Thursday morning as water swelled creeks and rivers long after Ida moved out. Up to 6 to 8 inches of rain fell from Chester County through Mercer County.

The storms led to deadly flooding throughout the area, including Philadelphia, where the Vine Street Expressway, MLK Drive and Kelly Drive were closed as water took over the roadways.

Water from the Schuylkill River flowed onto the Vine Street Expressway, turning it into a river of water that cut Center City in half from 22nd Street to Broad Street.

By 6 a.m. the water level along the Schuylkill near 30th Street Station was already at 15.25 feet, well above the major flood level of 14 feet.

Cars continued to drive along the Schuylkill Expressway during the Thursday morning commute as water began to flood I-76 near 30th Street. PennDOT eventually shut down I-76 around 6:40 a.m. It remained closed all the way to the Conshohocken Curve in Montgomery County.

I-76 later reopened in both directions between I-676 and South Street Thursday evening.

People along low-lying areas up the river in Manayunk were urged to shelter in place as the water rose. Debris could be seen floating down streets in Manayunk.

In Center City, people were forced to evacuate the 941-unit Park Towne Place apartment complex when water from the nearby Schuylkill River overflowed. In an alert to residents, management told residents that “deteriorating conditions” forced power shutoffs.

Residents were urged not to attempt to use the elevators.

The School District of Philadelphia announced that students, who had just begun the new school year in person for the first time in more than a year due to the COVID-19 pandemic, would revert to full online learning Friday because of the damage to roads and buildings.

City offices and courts in Philadelphia will also be closed to the public on Friday.

The Schuylkill River Trail was entirely underwater – SkyForce10 witnessed a pedestrian being rescued from the trail. The Fairmount Water Works near the Philadelphia Museum of Art was underwater at daybreak, with no sign of the normal dam you see at that point.

The forecast crest for the Schuylkill River broke an all-time record in Norristown, Montgomery County, where the water was above 25 feet. The previous record was in 1869, meaning it was the worst flooding in more than 150 years.

The Schuylkill in Philadelphia crested near the all-time record of 17 feet around 9 a.m. It has since fallen a few feet.

Major flooding also occurred Thursday morning at Brandywine Creek at Downingtown and Chadds Ford, and the Perkiomen Creek at Graterford.

Crews in boats saved people off the roof of a flooded home in Bridgeport, Pennsylvania, Thursday morning as the Schuylkill River flooded over its banks. Other rescues could be seen as crews went from home to home.

The East Branch Brandywine Creek below Downingtown, Chester County, easily surpassed its old record crest of 14.8 feet that was set during Hurricane Floyd in 1999.

A temporary shelter was also created at Central Presbyterian Church on 100 West Uwchlan Avenue in Downingtown.

Both directions on the Pennsylvania Turnpike between the Valley Forge exit and Downingtown exit are closed for an extended period of time due to the significant flooding.

Flash flooding also occurred throughout the region on Wednesday with hundreds of water rescues reported in parts of Bucks, Montgomery, Chester and Lehigh counties.

In Upper Dublin Township, Alan Fox, a resident since the '70s, said he had never seen damage of the scale he witnesses Wednesday night, with trees snapped in half, dangling power lines, cars buried by debris and pieces of the roof of Upper Dublin High School strewn on the street. The NWS later confirmed a tornado touched down in the township.

“This is the most demolished I’ve ever seen anything," Fox said as he continued walking to his house and hoping for the best.

Officials in the township told NBC10 a woman died Wednesday night when a tree fell on her house. She was one of three people killed in Montgomery County by Ida's winds and floods. Two others died in separate drownings.

State Troopers responded to 1925 Trumbauersville Road at 11:16 p.m. Wednesday for a report of a missing person who had driven a vehicle into the flood waters of Unami Creek.

When they arrived, state troopers and firefighters tried to retrieve the vehicle, a 2013 Mazda CX-9, but conditions were too severe. They then postponed the search efforts at 11:30 p.m. The passenger, a 54-year-old woman, managed to escape the vehicle and was taken to Saint Luke’s Upper Bucks campus.

On Thursday around 6 a.m., state troopers, firefighters and members of a water rescue team returned to the scene and found the body of the driver, later identified as 65-year-old Donald Allen Bauer of Perkiomenville, Pennsylvania. Bauer was pronounced dead at the scene. The cause of death was drowning, and his death was ruled accidental.

In Mercer County, three police officers were swept away by floodwaters but later rescued, according to the NJ State PBA.

The NWS confirmed at least seven tornadoes touched down in the region.

The weather service said a high-end EF-3 tornado in Mullica Hill, New Jersey, carried debris about 23,000 feet into the atmosphere and landed miles away. Winds from the tornado peaked at 150 mph. Some of the debris landed as far Mercer County, New Jersey, and Bucks County, Pennsylvania, a distance of about 60 miles from Mullica Hill for each location.

Homes were toppled by one of the passing tornadoes. Some of the houses still standing had their roofs ripped off and windows blown out.

Troy Bonnenberg said he was getting alerts on his phone and on the radio and was trying to keep his children calm when he suddenly heard the roof start to collapse. The family, like others in the neighborhood, rushed to their basement. Bonnenberg said the basement saved their lives.

A series of tornadoes spawned across the Philadelphia region on Wednesday as the remnants of Hurricane Ida dragged northeast. Homes were left destroyed and streets inundated with flood waters.

Emergency crews said everyone in the neighborhood was accounted for and somehow uninjured.

Another tornado touched down in Fort Washington/Upper Dublin Township and traveled to Horsham Township in Pennsylvania, the NWS reported. The EF-2 tornado had peak winds around 130 mph.

In Buckingham Township, the NWS reported an EF-1 twister with winds up to 100 mph.

A sixth tornado was confirmed in Princeton, New Jersey. The weather service said the EF-0 twister had estimated peak winds up to 75 mph.

Finally, a seventh tornado, an EF-1 with 90 mph winds, was confirmed in Upper Makefield Township.

Prior to the confirmed tornadoes, the region was in the 10% tornado risk area, which is significantly high.

According to the NWS, the last two 10% tornado threats in our region occurred on Sept. 3, 2020, and Aug. 4, 2020, during Isaias in which there were five confirmed tornadoes.

The National Weather Service Mount Holly issued 16 tornado warnings for the area on Wednesday, bringing the total number to 51 and easily breaking the previous record of 36 that was set last year.

There were also widespread power outages.

By early Thursday evening, PECO reported 24,484 outages in Montgomery County, 2,415 in Bucks County, 2,232 in Chester County and less than a thousand in Philadelphia.

Governors in Pennsylvania and New Jersey opened up emergency operations centers to respond to life-threatening storm conditions. New Jersey Gov. Phil Murphy pleaded with residents not to go outside for the next 12 to 15 hours until the storm cleared the state.

Severe storms and tornadoes led to widespread damage and power outages throughout South Jersey. NBC10's Matt DeLucia has the latest on the conditions.