The NBC10 Weather Team issued a First Alert for the entire greater Philadelphia region Thursday due to storms with blinding downpours and damaging winds that took down trees and knocked out power for thousands.

The first round of the storm brought powerful winds in the morning.

By around 3 p.m., there were reports of trees down on roads, houses and trolley lines throughout the area, including Philadelphia and Delaware as well as Havertown and Nether Providence in Delaware County and Springfield and East Norriton in Montgomery County.

In Chester County, a witness captured video of a tree falling onto a home.

In Wilmington, Delaware, two people were injured after a tree fell on a home. 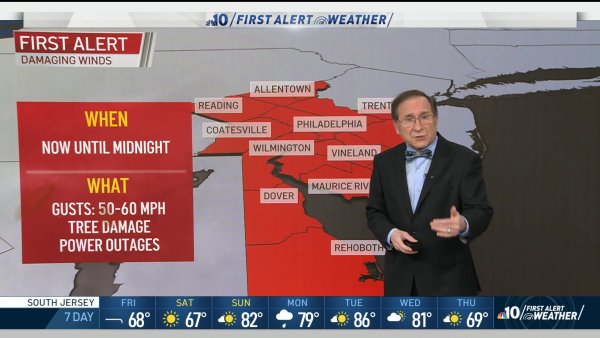 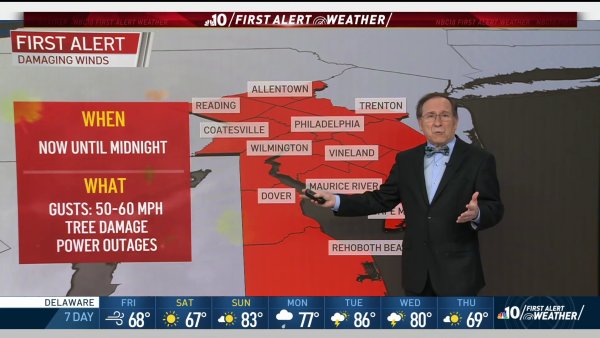 Two people were injured after powerful winds caused a tree to fall on a home in Wilmington, Delaware. NBC10's Tim Furlong has the details.

In Winslow Township, New Jersey, strong winds damaged the roof of a building.

Heavy rain with torrential downpours also moved into the region late Thursday afternoon. By late Thursday, the rain died down and the First Alert was canceled.

The storm caused widespread power outages. By Friday morning, 9,268 customers were without electricity in Chester County; 2,205 in Delaware County; 561 in Montgomery County; 376 in Philadelphia; 282 in Delaware; and 205 in Cumberland County, New Jersey.

We're getting reports of wind damage as storm systems roll into the Philadelphia region.

Stay with the NBC10 First Alert Weather team for the latest weather updates.