A First Alert for severe thunderstorms is in effect Friday afternoon an evening for the suburbs, Berks County and Lehigh Valley

The NBC10 First Alert Weather Team has issued a First Alert for the potential for severe thunderstorms late Friday afternoon and evening.

The storms are most likely to occur in the Lehigh Valley, Berks County and into the western Pennsylvania suburbs. Only Philadelphia, Delaware, eastern Montgomery and lower Bucks counties aren't included in the First Alert.

The National Weather Service issued a Severe Thunderstorm Watch through 9 p.m. for all area Pennsylvania Counties except Delaware and Philadelphia counties. 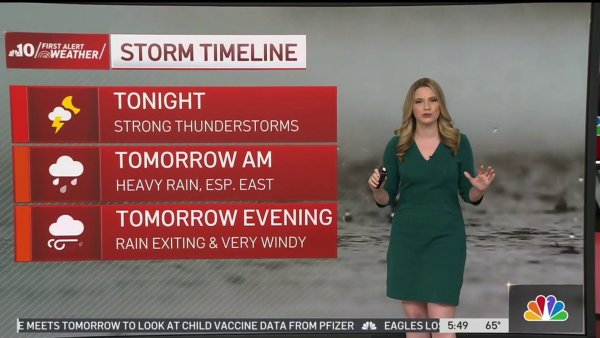 Mostly cloudy conditions were in place Friday morning, we then got some breaks of sunshine Friday afternoon and really helped heat things up this afternoon. Some scattered showers also hit during the day.

A high temperature in the mid-80s with high humidity had it feeling like it's closer to 90 degrees Friday.

Heat, humidity and an approaching cold front: that's the recipe for strong thunderstorms and potentially severe weather. The first storms will likely take shape after 5 p.m., moving into Berks County and the Lehigh Valley. The storms will likely move into the western Pennsylvania suburbs during the early evening hours.

These storms may be capable of damaging wind with gusts up to 65 mph, bringing down trees and tree limbs that could lead to power outages, so be sure to have your devices charged. There's also a possibility of hail and an isolated tornado can't be ruled out.

As the cold front moves through overnight, skies will be clearing out and pleasant weather will return for the weekend. Highs Saturday are expected in the low 80s.